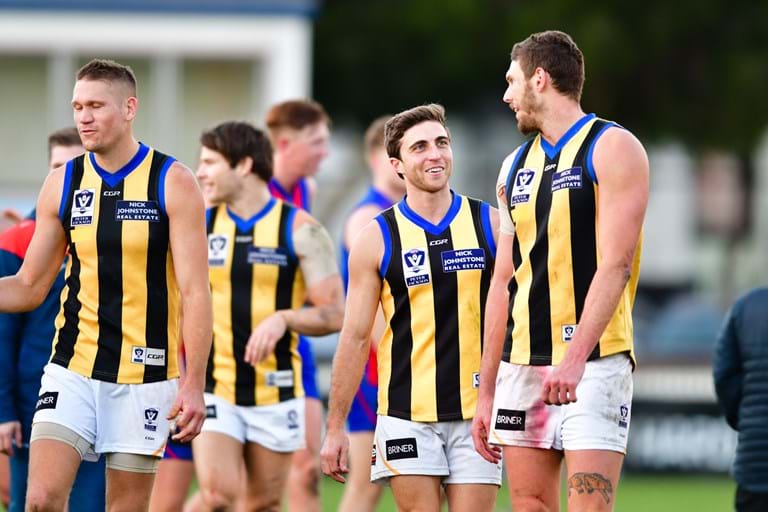 Sandringham have shocked the competition after pulling off a massive upset, knocking off reigning premiers Port Melbourne on their home turf. The Zebras well and truly made amends for their disappointing loss against Williamstown, having remained goalless for the first time in their 89-year history before the bye.

The first quarter was a tight contest, when Ray Connellan scored the first goal early in the quarter followed by a quick response from Port Melbourne. The first quarter intensity was high from both teams, but the Zebras responded well to the pressure and held a 6-point lead going into the first break.

The boys made it clear that they meant business when they came out in the second, as Minchington kicked two goals early coming back from injury which has kept him out for a number of weeks. The Borough struggled to convert, kicking four consecutive behinds.

Despite Port Melbourne managing to apply some really good pressure, the Zebras proved that they were well and truly up to the task and extended their lead to 13 at half time.

Early in the third quarter, the rain had started to pour, but after last week that wasn’t going to phase Sandringham. As the boys kicked four unanswered goals, which didn’t come to an end until a goal from Port Melbourne in the 23rd minute. At the final break, we held a lead of 39 points and showed no signs of slowing down.

After an early scare with Port Melbourne kicking the first two goals of the quarter in just four minutes, the Zebras held strong and quickly answered back with two of their own. The boys finished off the quarter in a very convincing way and gave themselves a strong win that they could be proud of.

Tom Hickey was dominant at the stoppages with 59 hitouts. Sandringham won the hitouts overall 75–27, and this was a huge factor in the huge win.

Aaron Hamill spoke proudly about his side’s efforts against a strong, proven side.

“It was a really strong team performance and we know how tough this Port Melbourne opposition are, particularly on their home deck,” Hamill acknowledged.

“We had to match them inside the contest and get our outside game going, which is something we haven’t always got right this year”.

Josh Bruce, Tom Lamb and Nathan Wright all kicked three goals and Brede Seccull was again a real ball magnet. With 11 individual goal kickers, the boys all worked really well as a side, and complimented each other’s game style which was a huge factor in the upset.