Zebras struggle against Carlton in return to VFL Action

The Sandringham Zebras were outplayed at Wilson Storage Trevor Barker Beach Oval on Saturday afternoon, suffering a 49-point defeat in their Rival Air Round 16 VFL clash against Carlton. 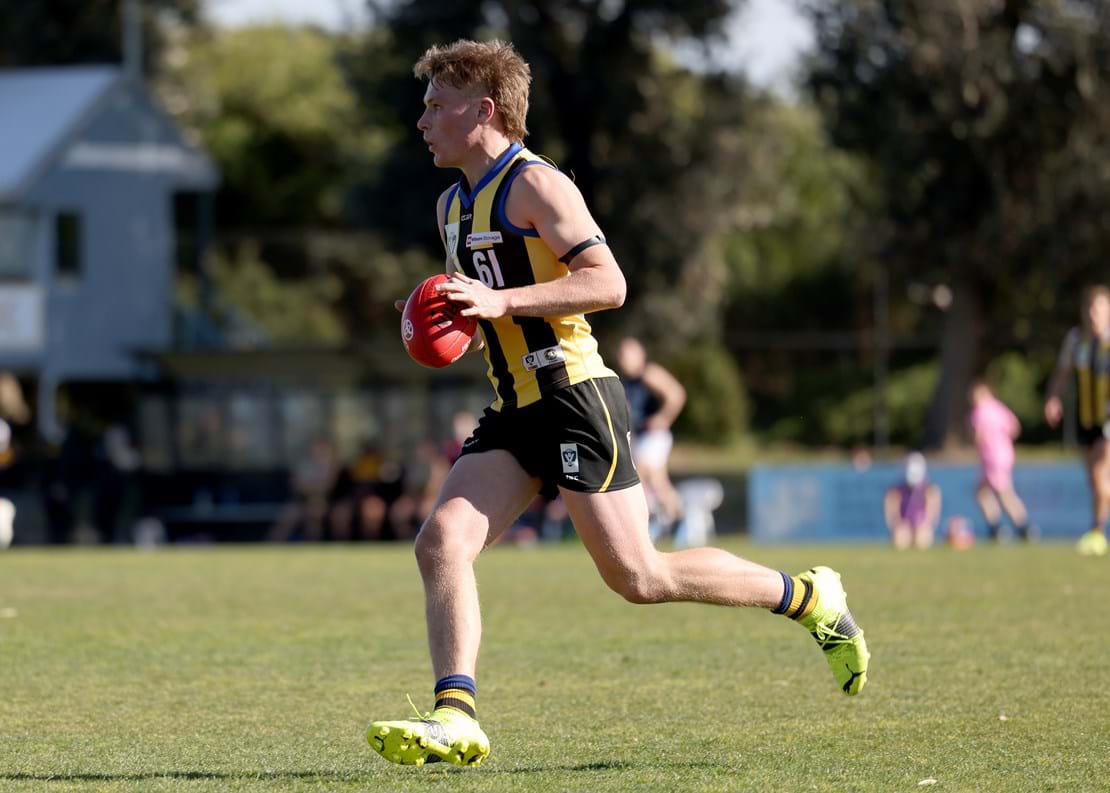 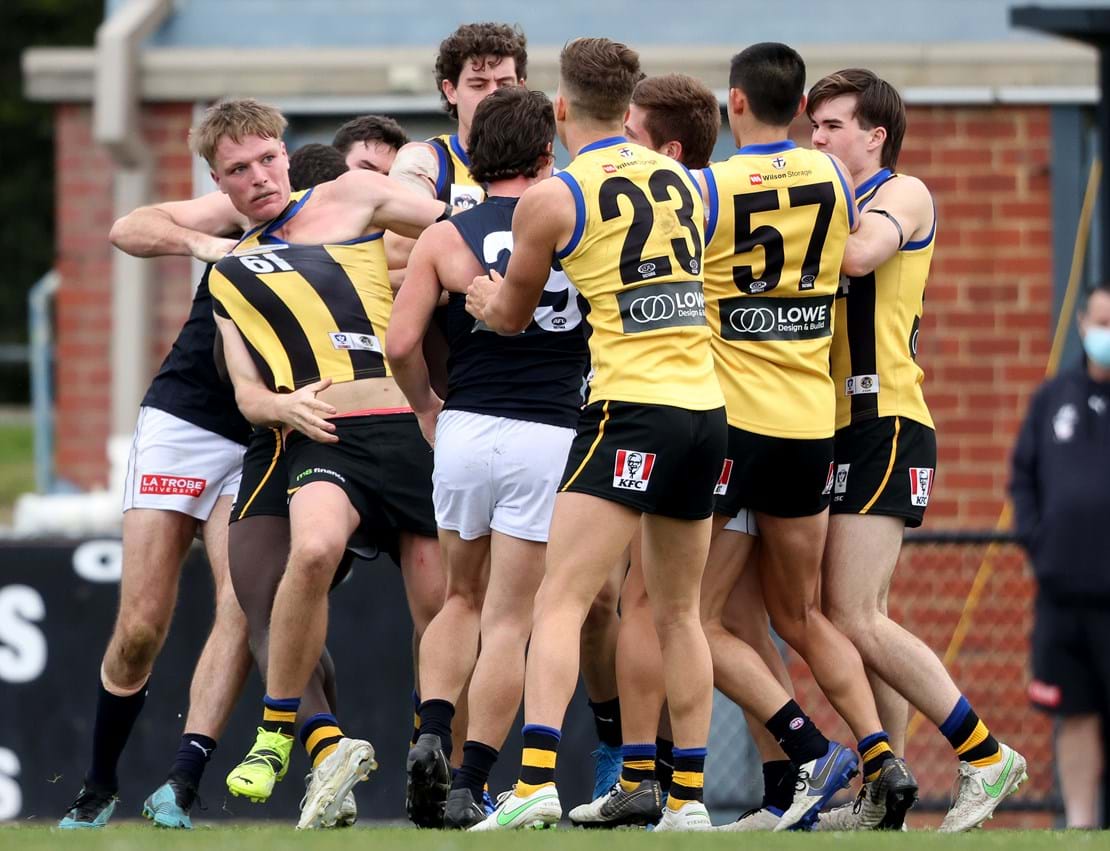 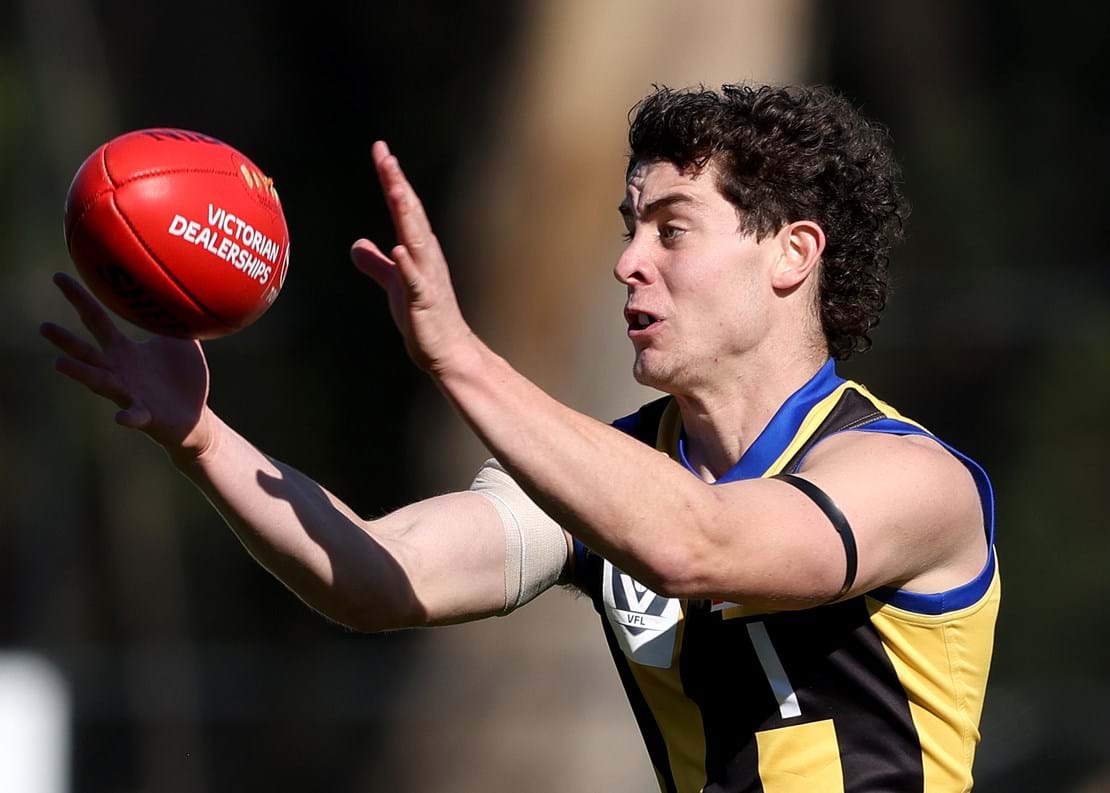 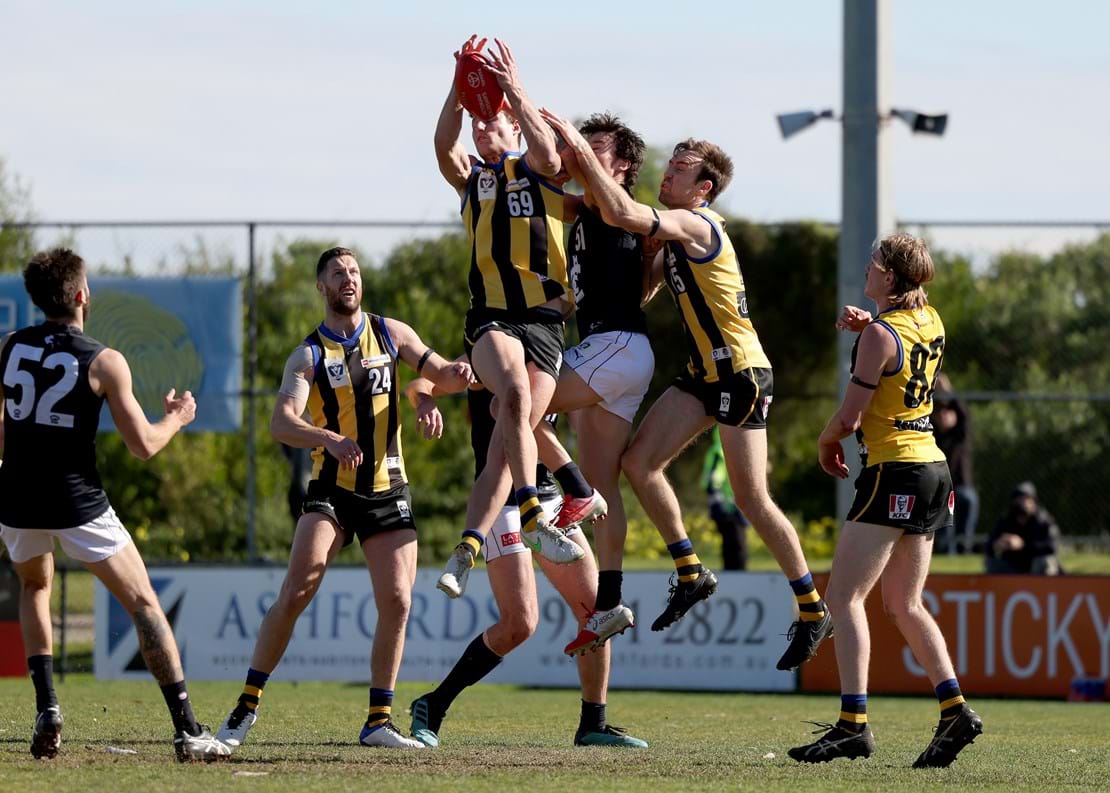 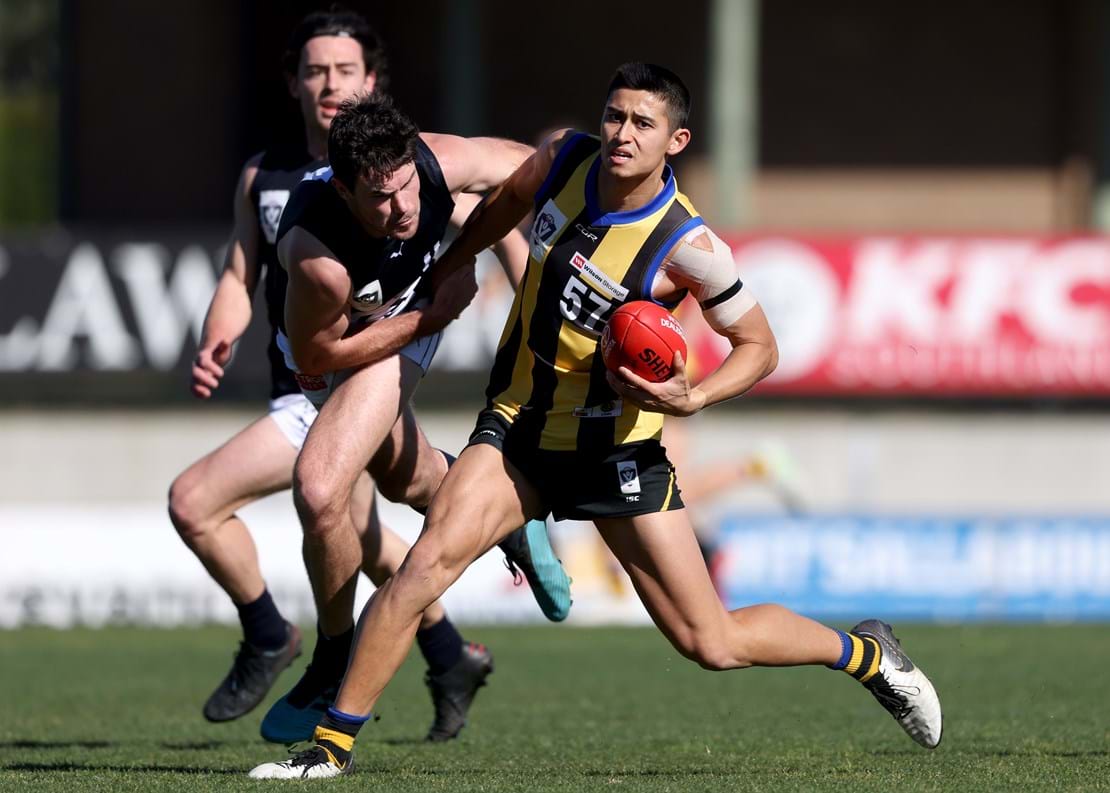 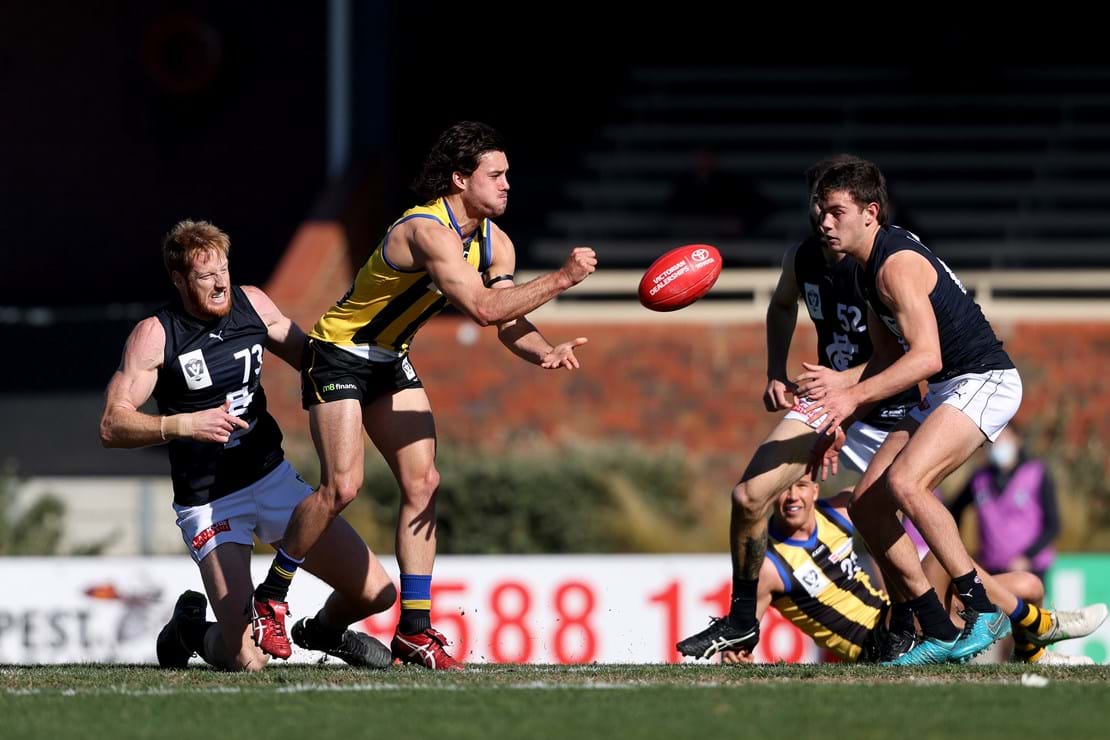 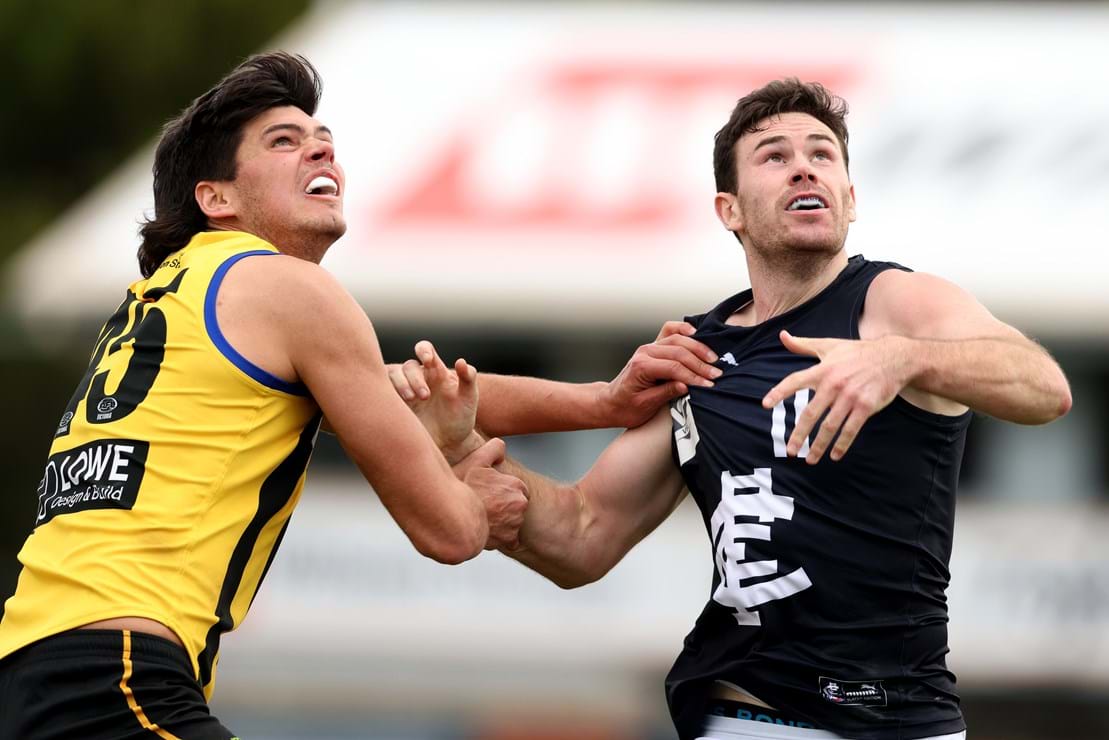 The conditions were ideal with blue skies and mild temperatures greeting the teams however, the atmosphere was eerily quiet inside the stadium, as no crowds were permitted due to COVID restrictions.

Kicking into a strong breeze towards the Saunter End, it was the Blues who gained the ascendancy early, slotting the opening goal of the match through a long-distance set-shot in the pocket from Mitch Mcgovern.

The wily veteran Trent Dennis-Lane was impressive early for the Zebras in his first senior match since 2016, laying a bruising tackle and looking ominous with his forward half pressure.

In the backline, James Frawley looked composed with ball in hand, leading an under-siege Zebras back six with the first five minutes of the game played entirely in Carlton’s forward half.

The Blues started piling on the goals, as Ben Crocker took advantage of a quick centre clearance to convert Carlton’s second of the afternoon, while Cooper Stephens slotted their third just a few minutes later.

The Zebras were struggling to exit their defensive 50, as a number of short kicks were getting stuck in the breeze and falling well short of their intended target.

Goals to Petrevski-Seton, Crocker and North extended the margin to 36 points as the Zebs looked flat and bereft of confidence.

Sam Dunell was thrown into defence to stem the bleeding for the home side, executing some handy spoils and intercept marks to halt the Blues momentum.

After a few minutes of scrappy football, the Blues managed to break through with yet another goal courtesy of Andrew Phillips, who slotted a swirly drop punt from the 50 metre arc for their sixth of the afternoon.

A few missed opportunities followed, as the Zebras trailed by 42 at the first break after a sluggish quarter.

It was the Zebras who took advantage of the breeze in the opening minutes of the second quarter thanks to a Darby Hipwell set shot goal from a difficult angle in the pocket.

Jack Bytel and Dan Hannebery were impressive in the clutches, helping the Zebras win multiple centre clearances as they started to control possession around the ground.

There was a noticeable boost in energy and enthusiasm on-field from the Zebras players after Hannebery’s miraculous snap from inside the centre square went through for the home side’s second of the quarter, cutting the margin to 30 points

Minutes later, Trent Dennis-Lane continued the admirable fightback by bursting away from his opponent in the forward pocket and snapping it through the big sticks from close range.

The scoring settled down after Dennis-Lane’s goal, with neither side able to capitalise on some gilt-edged scoring opportunities.

Darragh Joyce was composed at the other end of the ground, leading the way with several key possessions on the last line of defence.

The man of the moment -- Trent Dennis Lane -- broke the deadlock just before half-time, taking a strong mark on the lead and kicking a difficult goal from beyond the 50 metre arc for the Zebras fourth of the quarter.

A free kick close to goal gave Jack Lonie his first of the afternoon, and suddenly the Zebras trailed by just 15 points heading into a critical second half.

The Zebras were on the back foot to start the third quarter, with Carlton locking the ball inside their forward 50 early.

Joyce continued his impressive form, laying a timely run-down tackle close to goal to halt a promising forward thrust from the Blues.

Unfortunately for the Zebras, it was the Blues who hit back strongly, kicking multiple goals through Mcgovern and Crocker to put the Zebras on the back foot.

Jock Mchale was busy between the arcs, getting involved in several attacking plays in one of his better games for the club.

Some inaccurate goalkicking kept the Zebras in the game, as the Blues kicked three behinds in a row and struggled to take their opportunities.

Eventually the Zebras hit back through Finlay Bayne, who made amends for conceding a costly defensive 50 turnover earlier in the quarter to kick his side’s first of the quarter.

Another three late goals to Carlton extended the margin to 48 points, with the Zebras needing a miracle in the last quarter to overcome the deficit.

The last quarter started in a similar manner to the third, as Toby Wooller kicked Carlton’s fourth consecutive goal.

Darragh Joyce was thrown into the forward line and added a rare goal at the 10-minute mark, but the Blues still held a 9-goal lead and looked well in control.

Tyson Milne was a shining light across half-back on a challenging day for the Zebs, providing some excellent run and carry.

Darby Hipwell breathed some excitement into the contest, kicking a consolation goal from a booming 50 metre kick after the Blues put the game beyond doubt with two majors of their own.

The margin was a more respectable 49-points at the final siren thanks to a late 50-metre penalty to Nick Coffield, with the Blues winning convincingly against the Zebras at WSTBBO.

Senior Coach Jake Batchelor was disappointed in how the match unfolded.

“We weren’t in the game from the first centre bounce. It looked like they wanted the ball more and that’s something we can look at from the emotional and mental side of things as opposed to the physical application and the game plan,” he said.

Assistant Coach and late inclusion Trent Dennis-Lane spoke about the whirlwind experience of playing his first game in Zebras colours since 2016.

“We were trying to release some players to go back and play locally, so I was on the emergency list and I woke up this morning to a text from Batch saying that I was in,” he said.

“Having played AFL and VFL before, I was quietly confident my preparation would be alright and I’m still playing a little bit of football this year down at Bonbeach.”

“He played well and we were comfortable with him playing because he can impact the scoreboard and lead our forwards,” he said.

The Zebras now sit 14th on the ladder and move to 4-5 ahead of Round 17, with details of their next match to be confirmed during the week.