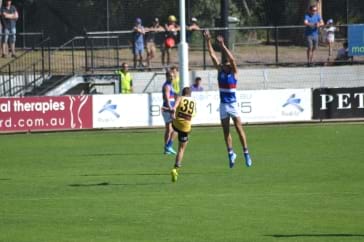 The Zebras started their season strongly, with a hard-fought win against Footscray at Trevor Barker Beach Oval in beautiful conditions on Saturday. Despite a slow start from Sandringham, they played a good physical match and managed to break away in the final quarter to earn the four points.

Footscray kicked the first three goals of the match, but Josh Battle managed to finally get the boys on the board with a goal in the thirteenth minute. What followed was a tight contest with the goals coming in thick and fast for both sides, teasing what was going to be a good contest all day.

Tom Hickey’s work in the ruck did not go unrewarded and he was in solid form all day. Despite being a lone ruckman for the Zebras, against two AFL listed ruckmen in Tom Campbell and Tom Boyd, St Kilda listed Hickey was up to the challenge and he was invaluable to the side.

Going into half time there was just one point the difference. There was a feeling that the Zebras had momentum on their side, having come back strongly in the second quarter. However, accuracy was proving to be a challenge and the boys were going to have to continue working hard.

Both sides came out firing in the second half, with both sides managing to kick well. It was a tight physical contest and the boys showed that they were up for the challenge that was ahead of them.

The second half began with two quick goals from Footscray, before Tom Lamb kicked a goal for the Zebras which began an onslaught from the boys kicking four unanswered. The contest was intense and physical though, with Footscray fighting back with a few of their own.

Sandy managed to hold onto and extend their lead in the final quarter though to take home the four points in the first round in what Senior Coach Aaron Hamill called a consistent effort.

“We were really pleased as a whole in all phases of the game we thought we were consistent”, he said in his post-match interview.

Inside midfielder Jack Steele had an absolute standout performance, racking up 35 disposals for the match. He was evidently dominant in the centre with 12 clearances and 11 tackles, clearly benefiting from St Kilda teammate Tom Hickey’s work in the ruck. He took full advantage of every opportunity and really made a difference to the Sandringham side.

The Zebras will look to hold the momentum next week against Geelong away at GMHBA Stadium in a curtain raiser for the Saints clash with the Cats at 1:00pm.