After a month on the sidelines due to COVID, the Sandringham Zebras resumed their season in style, defeating Richmond by 30-points in their Linen House Round 11 clash against Richmond at WSTBBO. 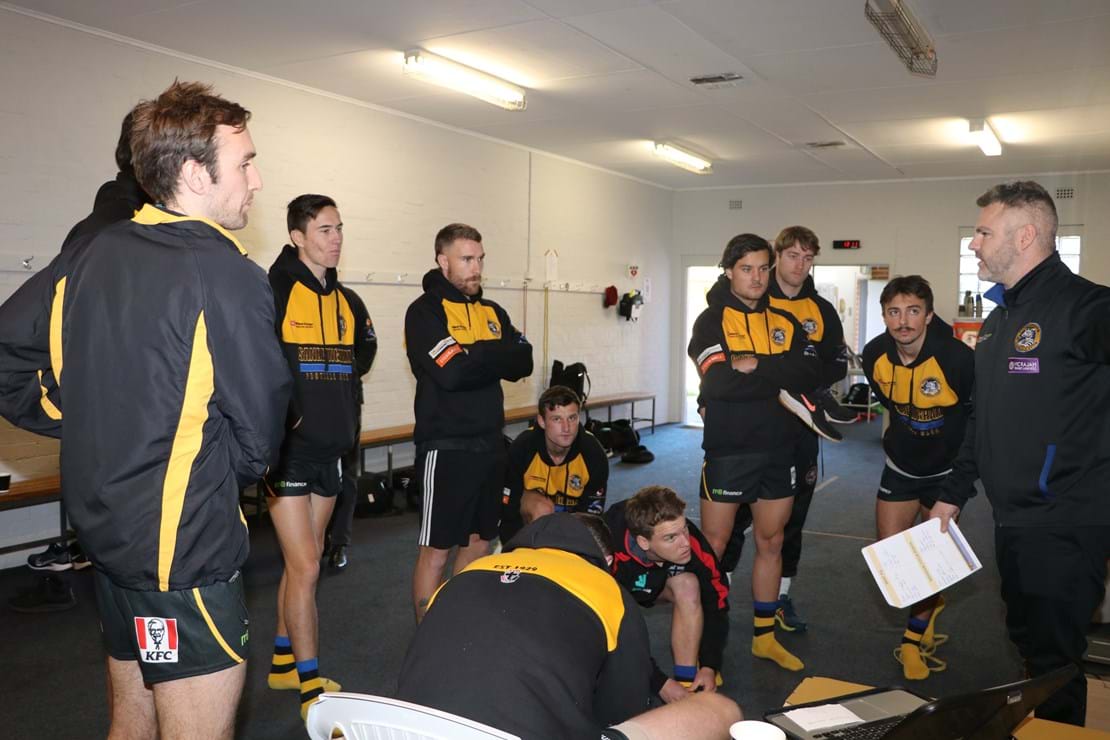 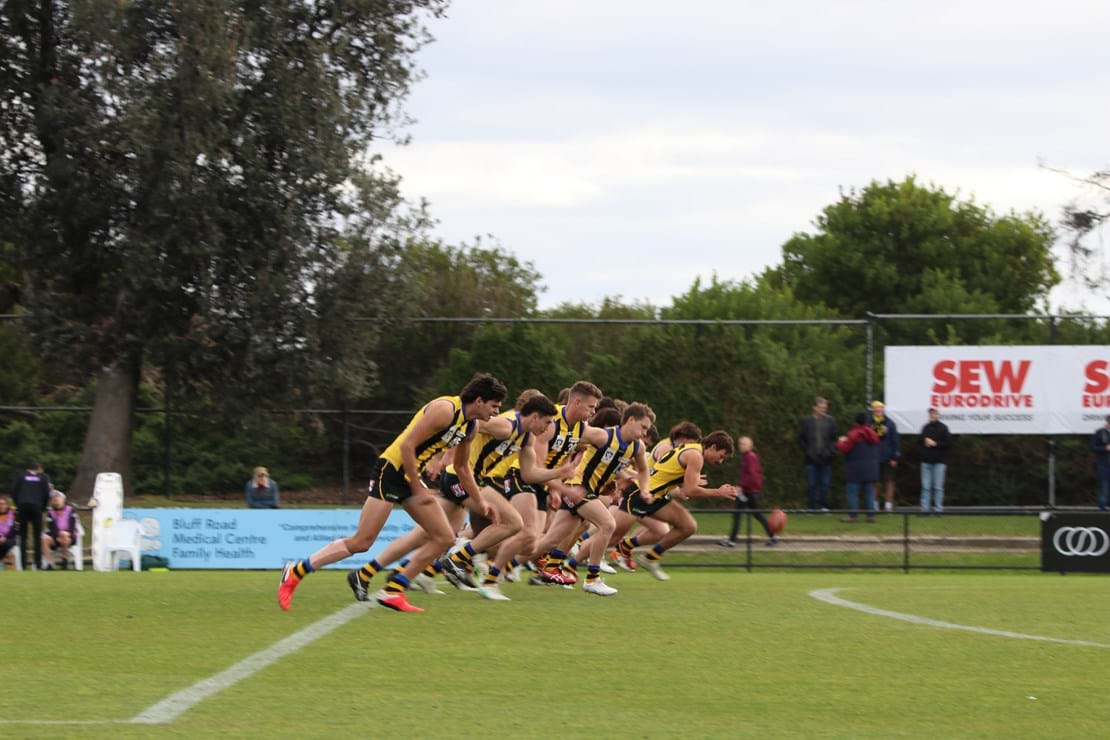 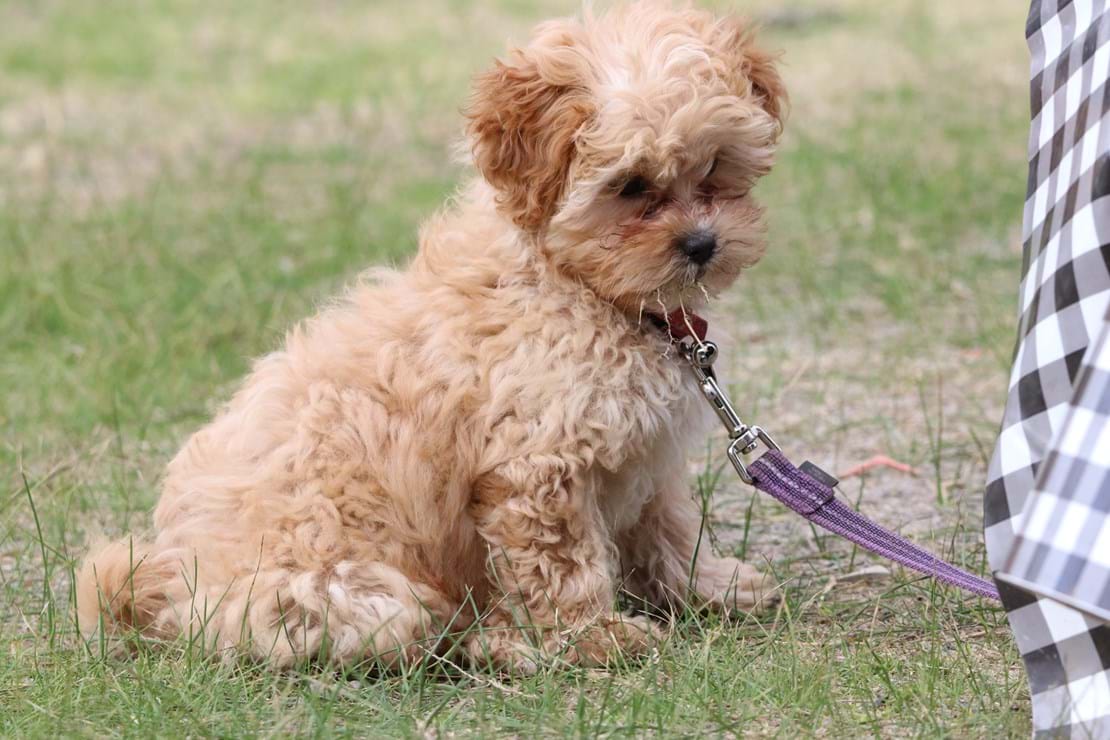 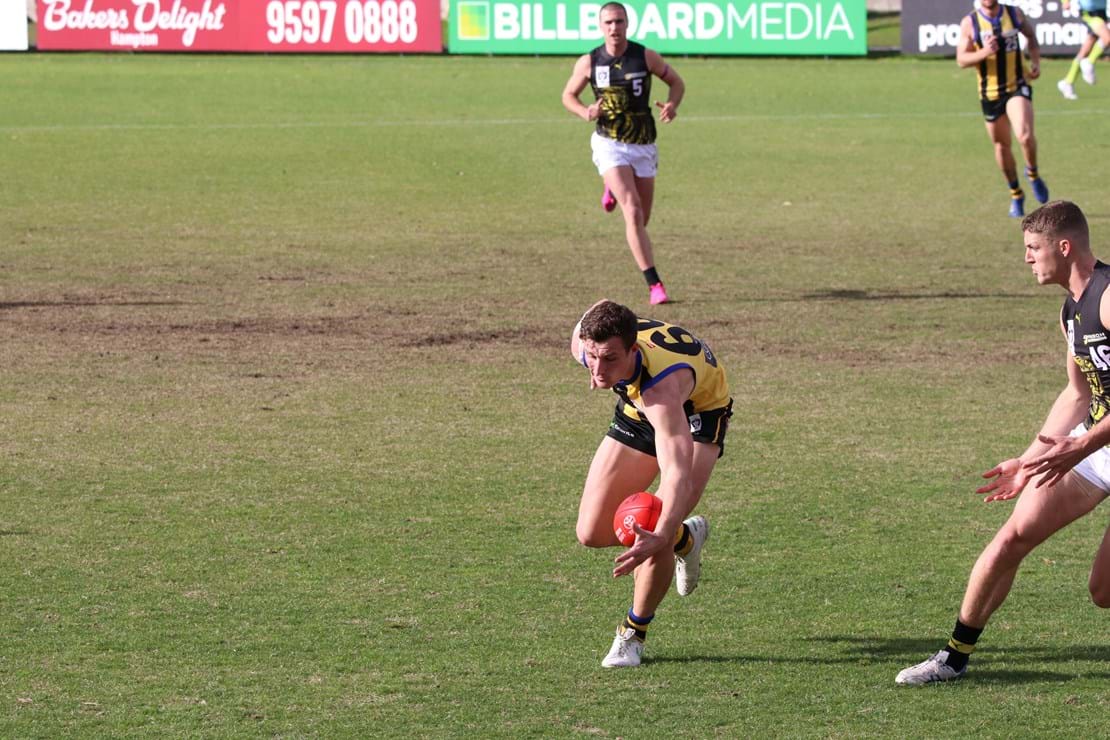 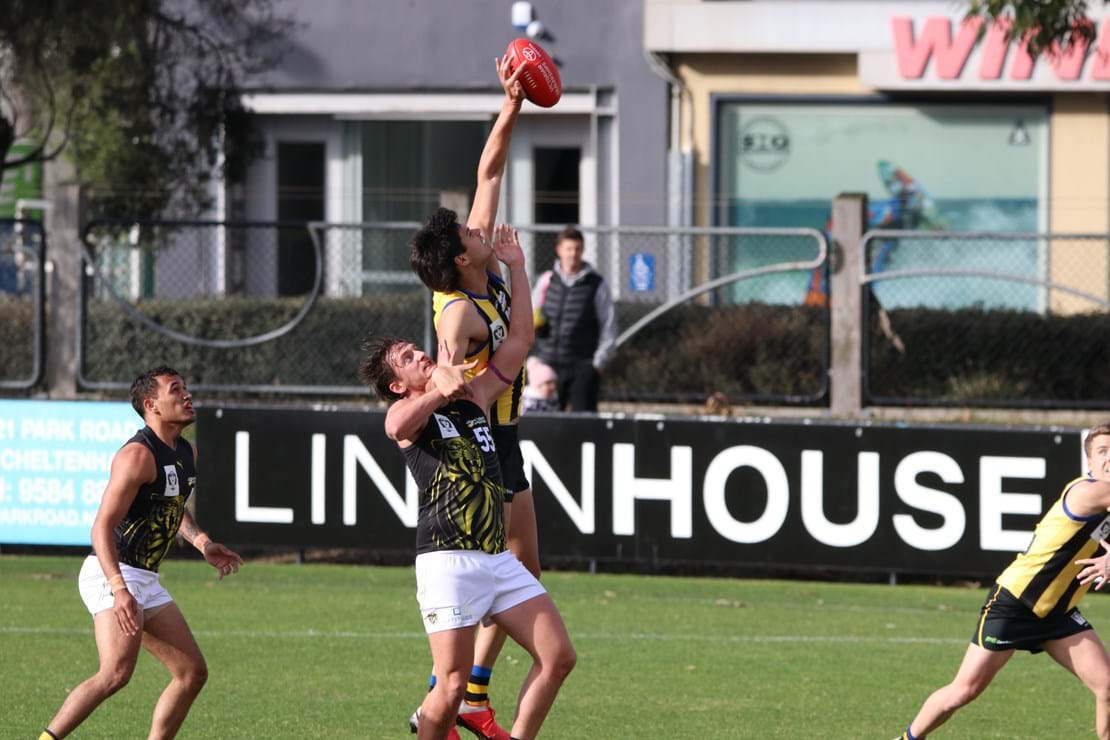 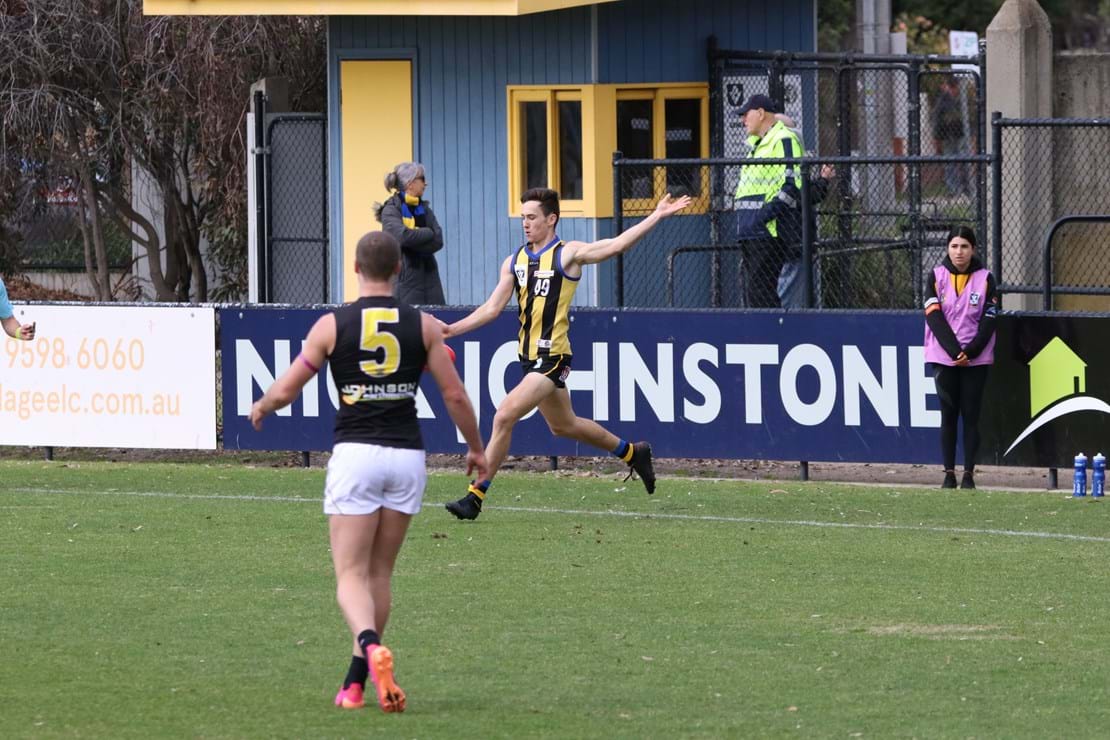 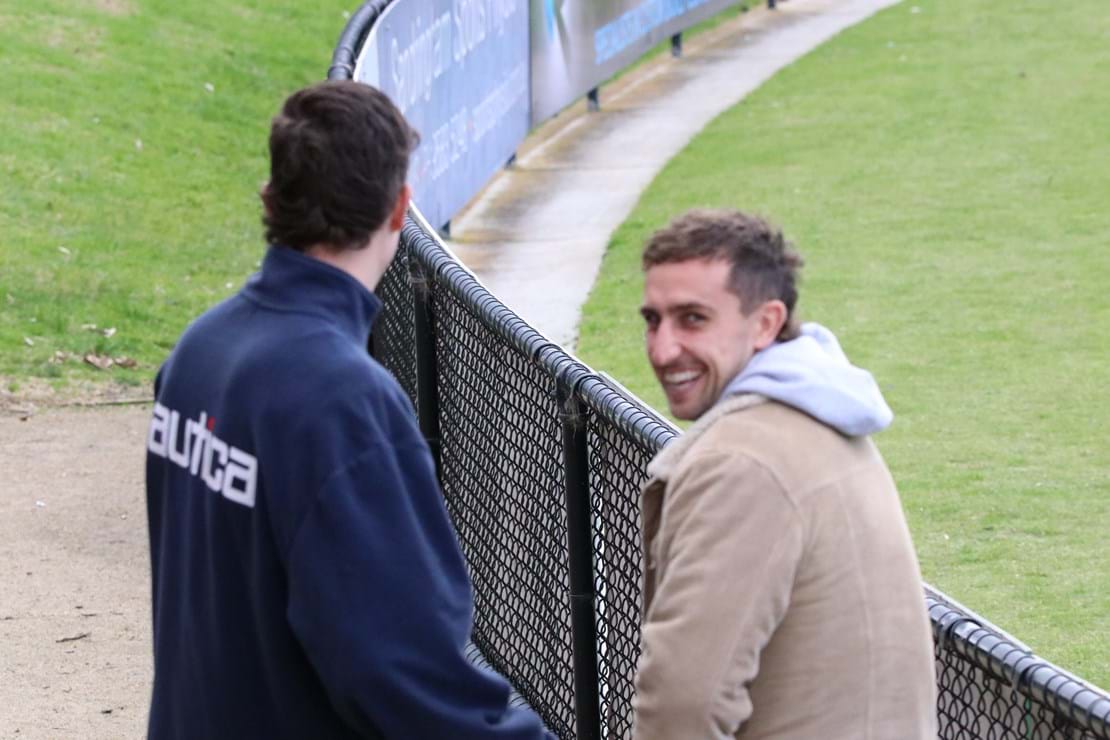 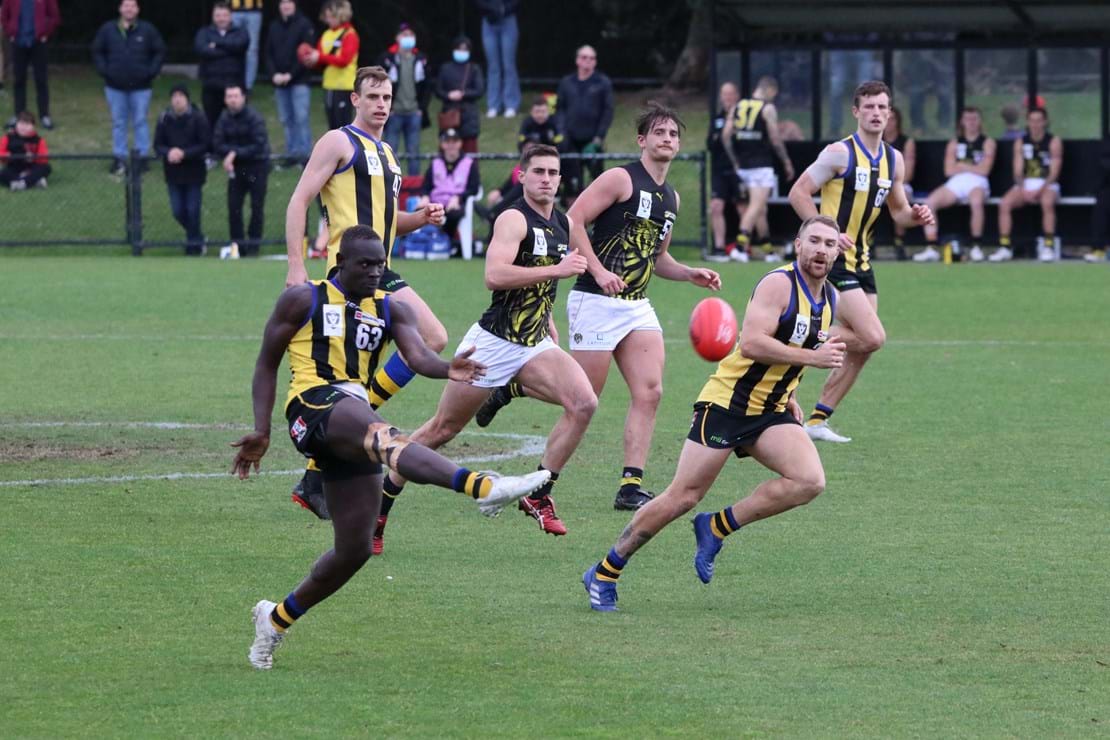 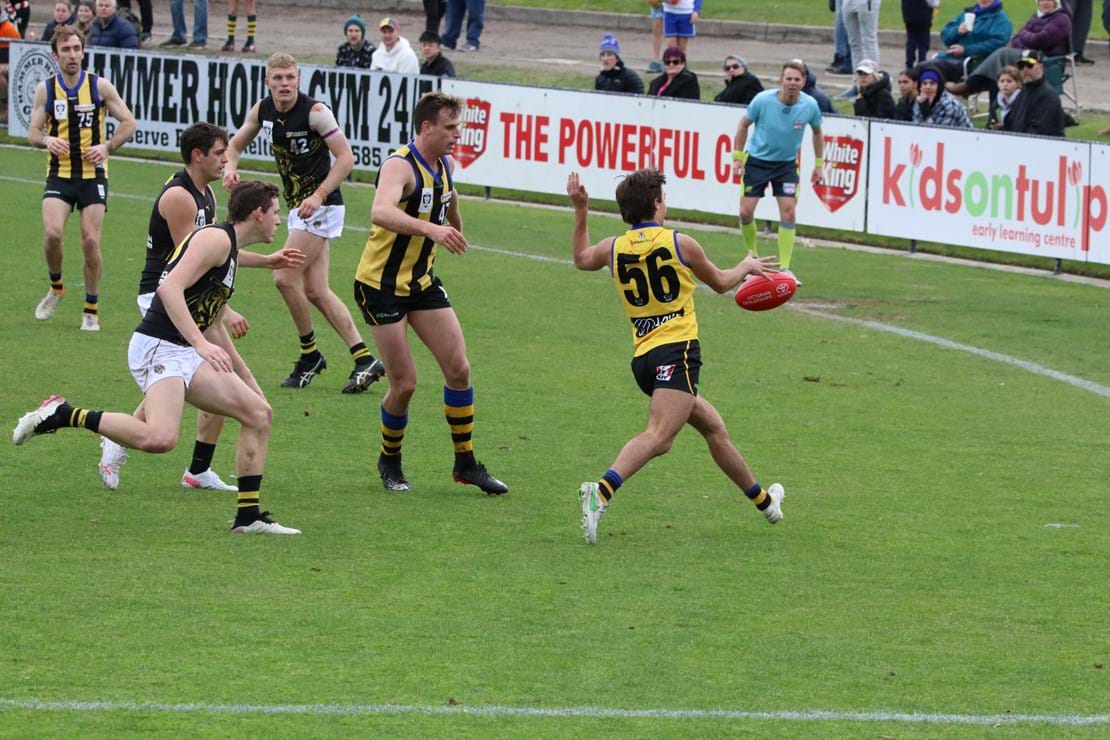 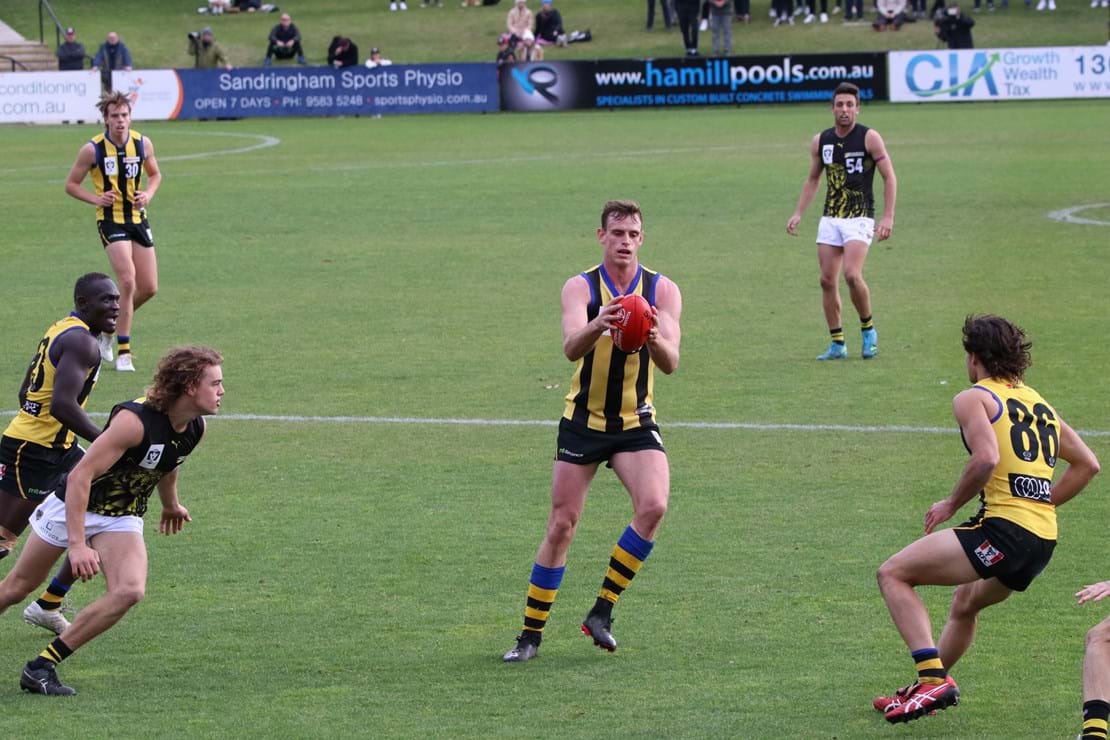 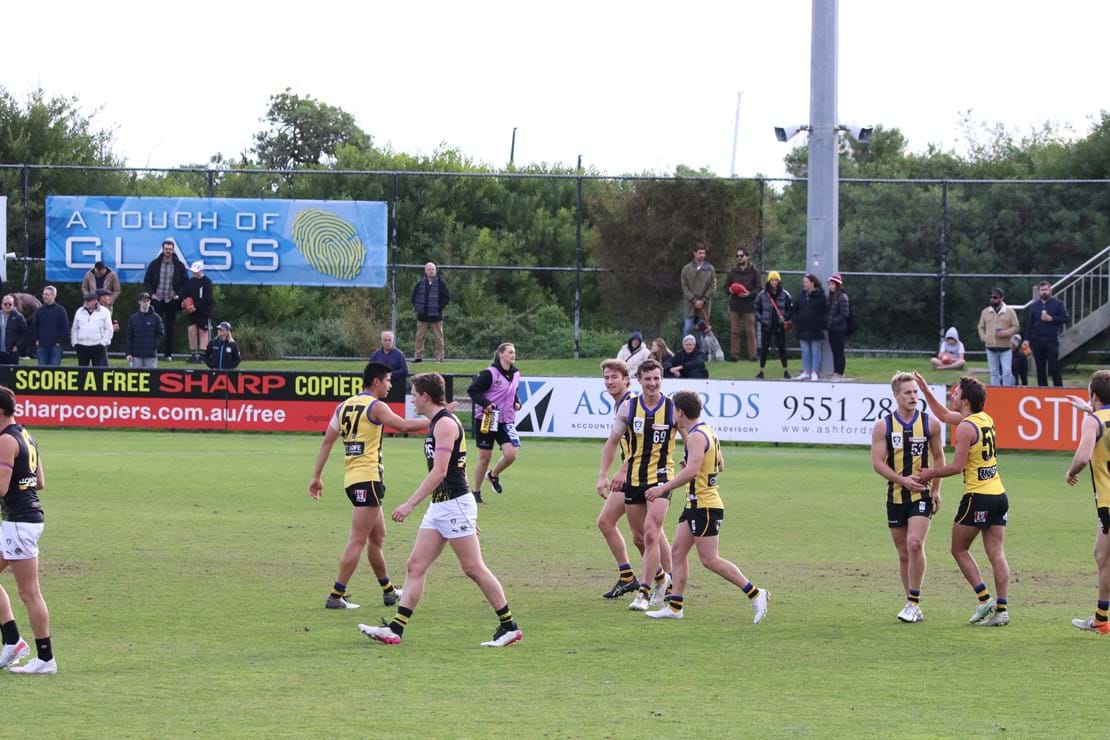 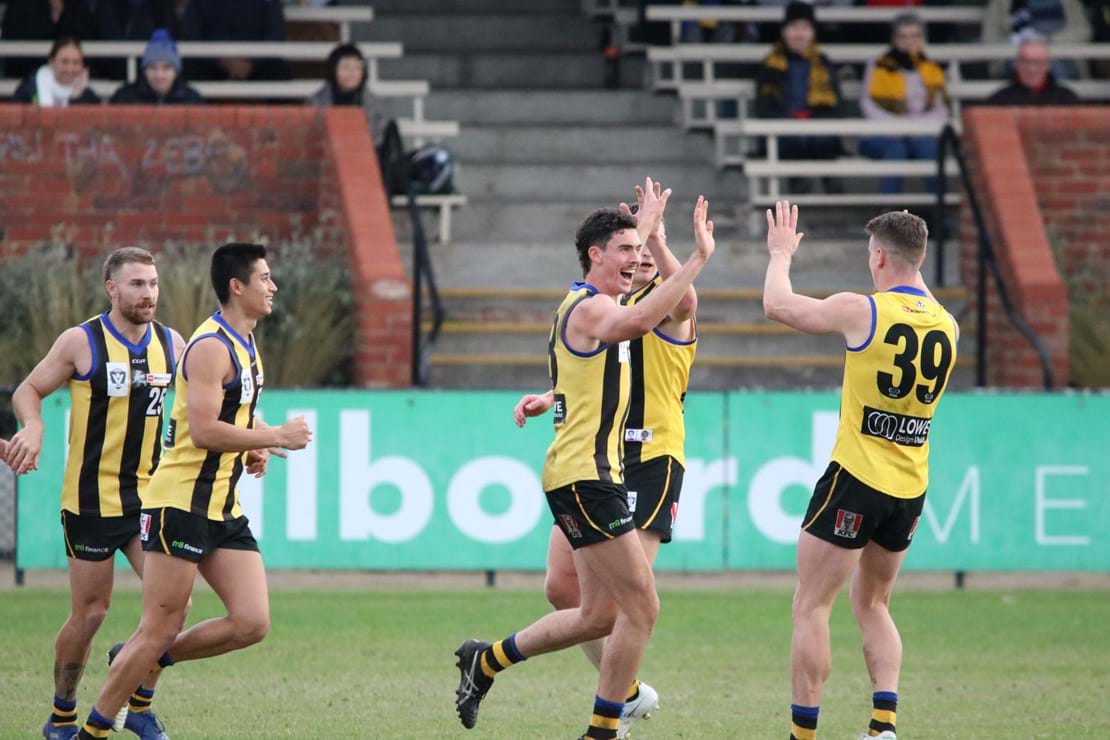 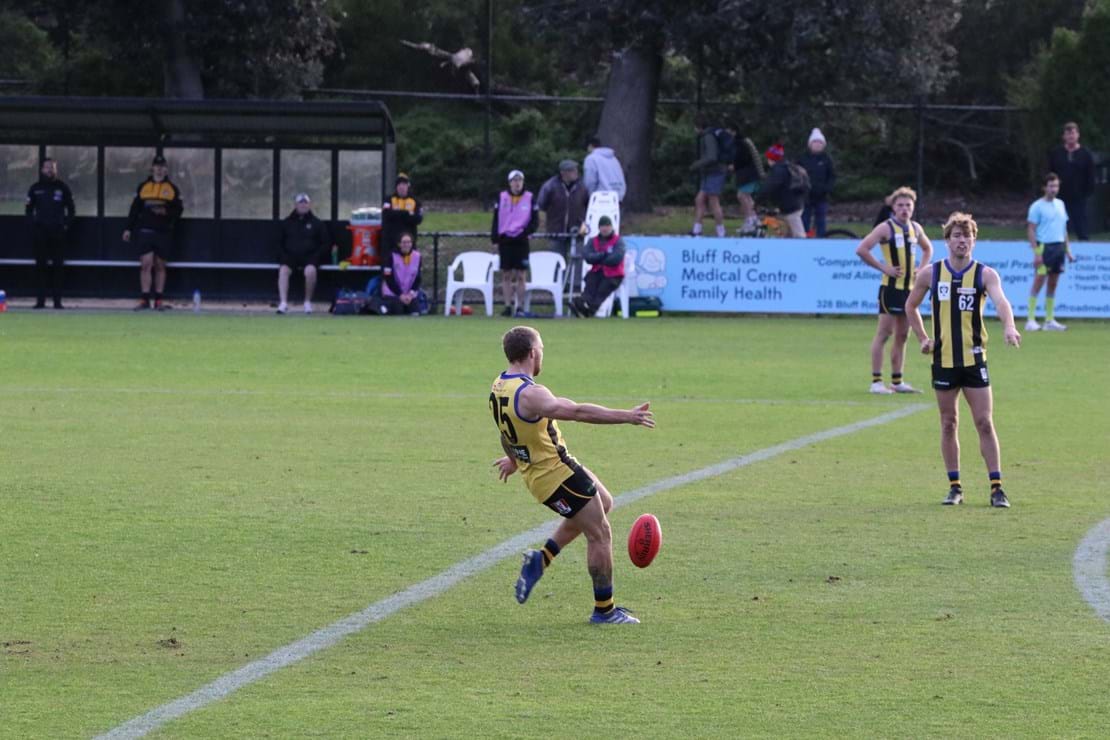 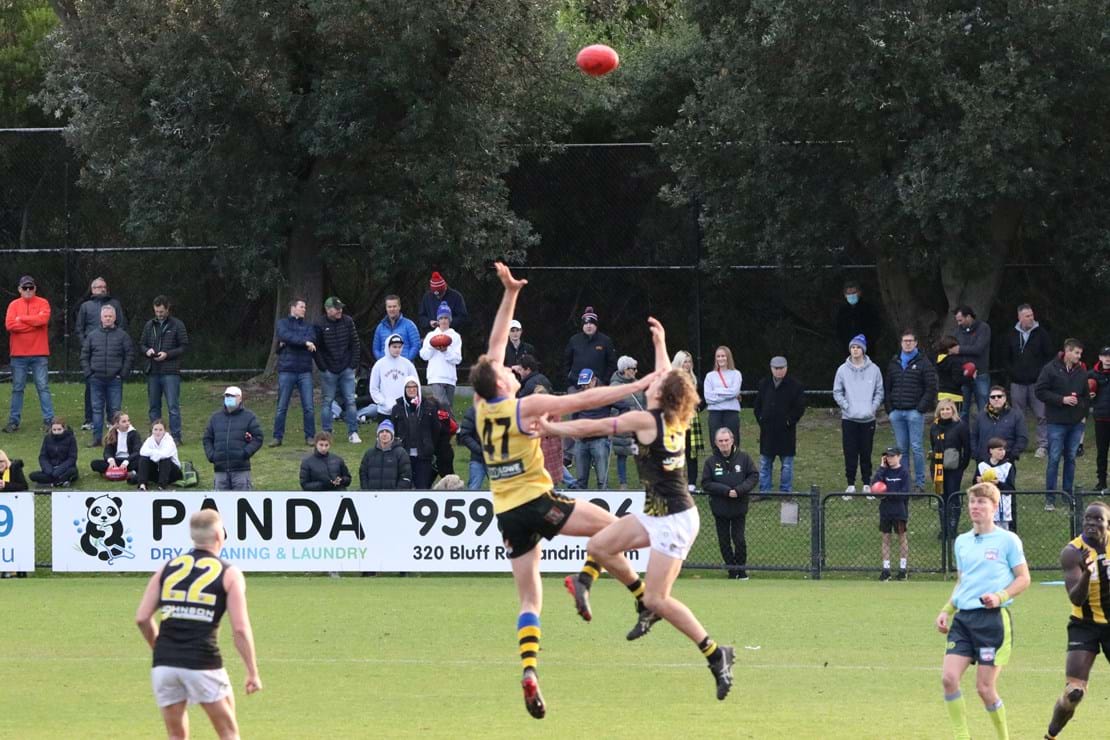 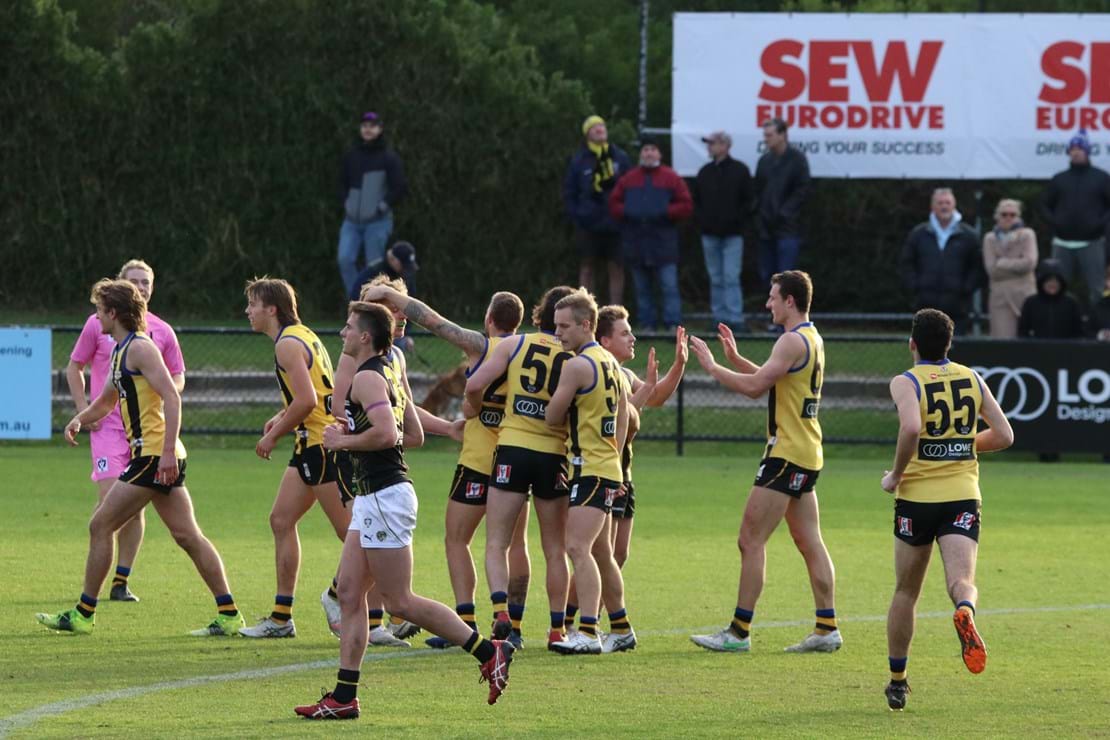 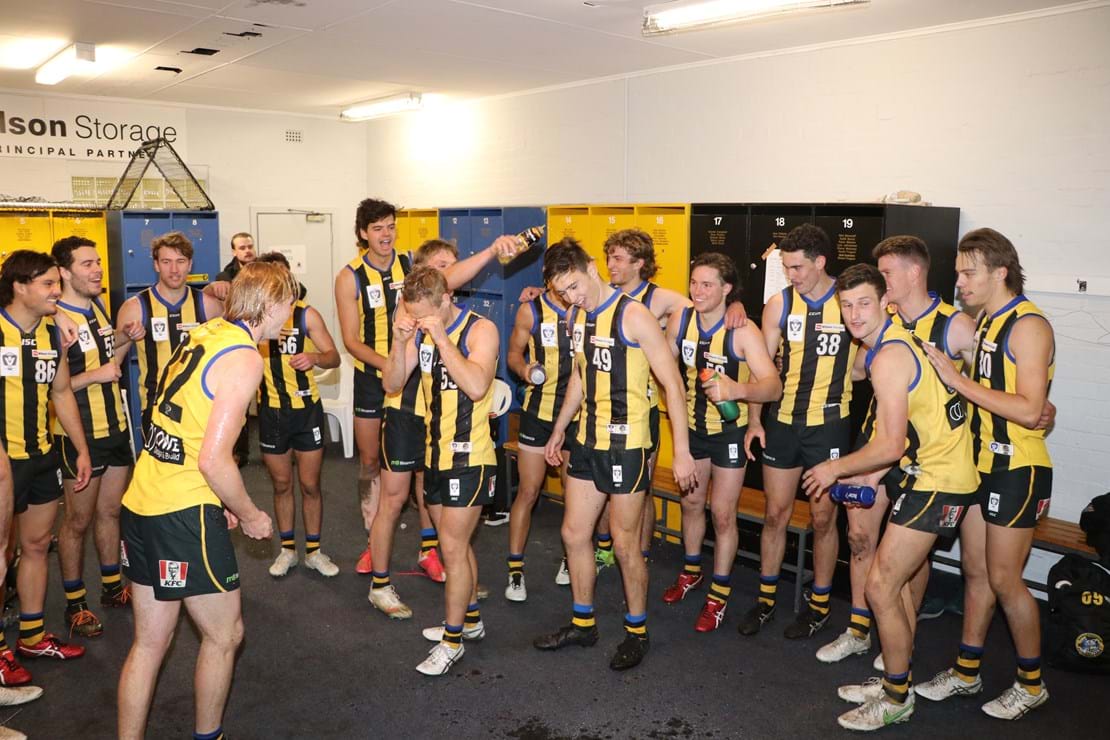 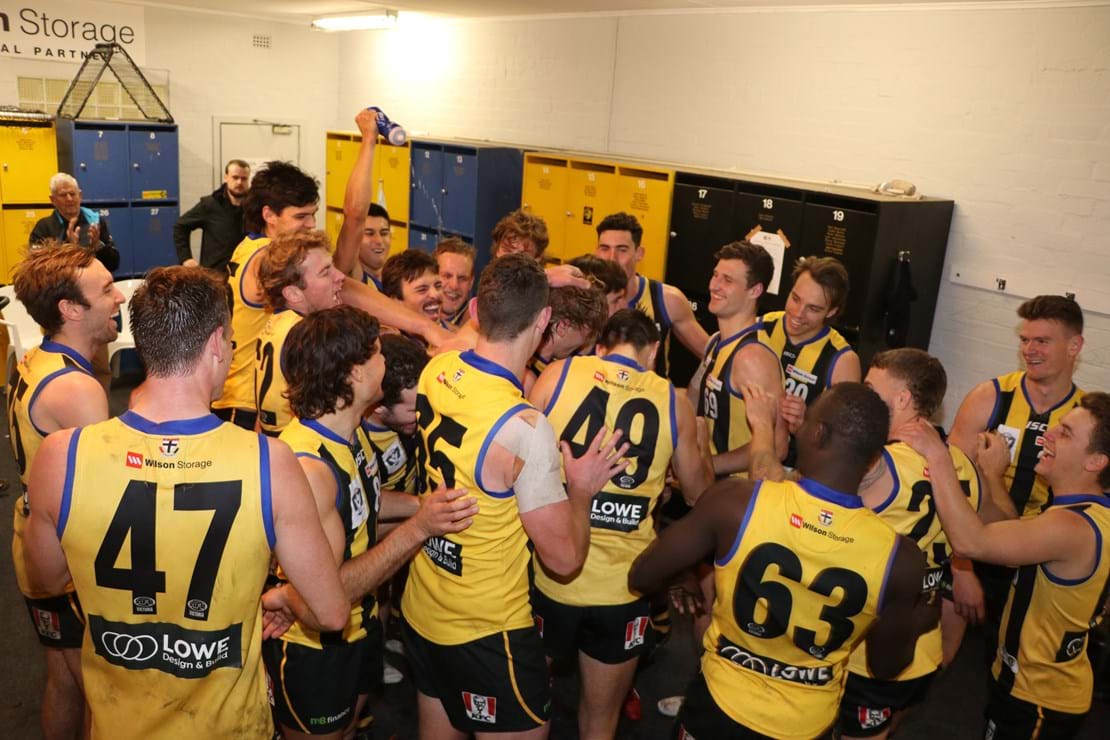 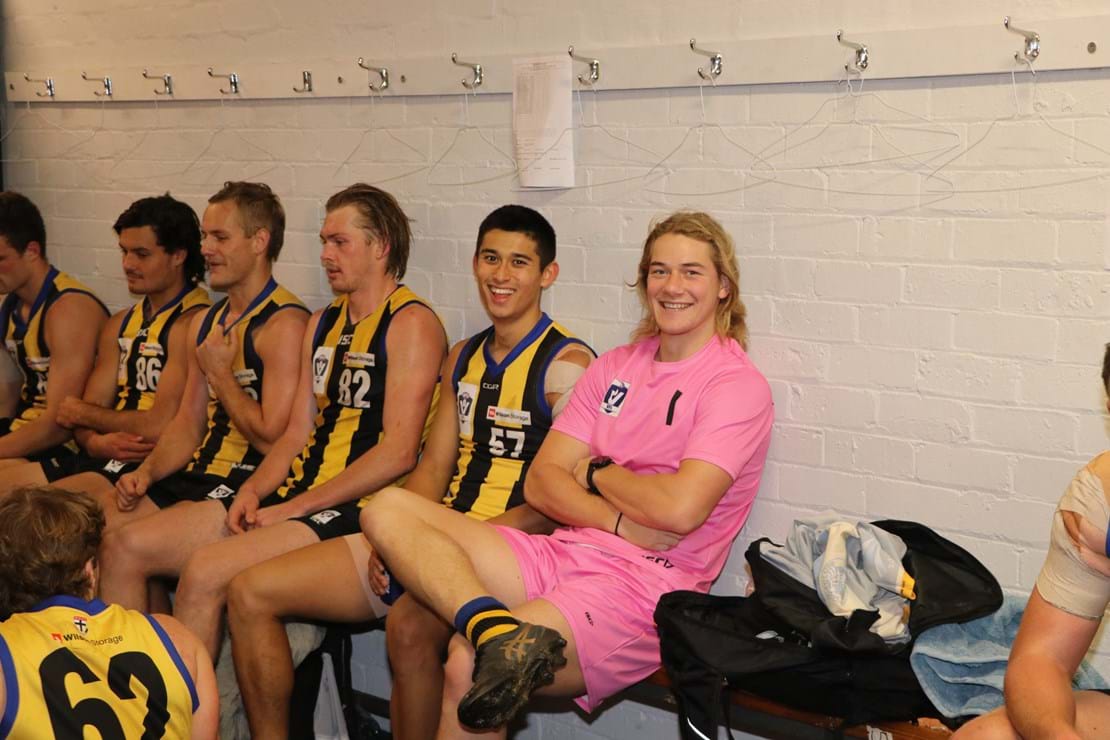 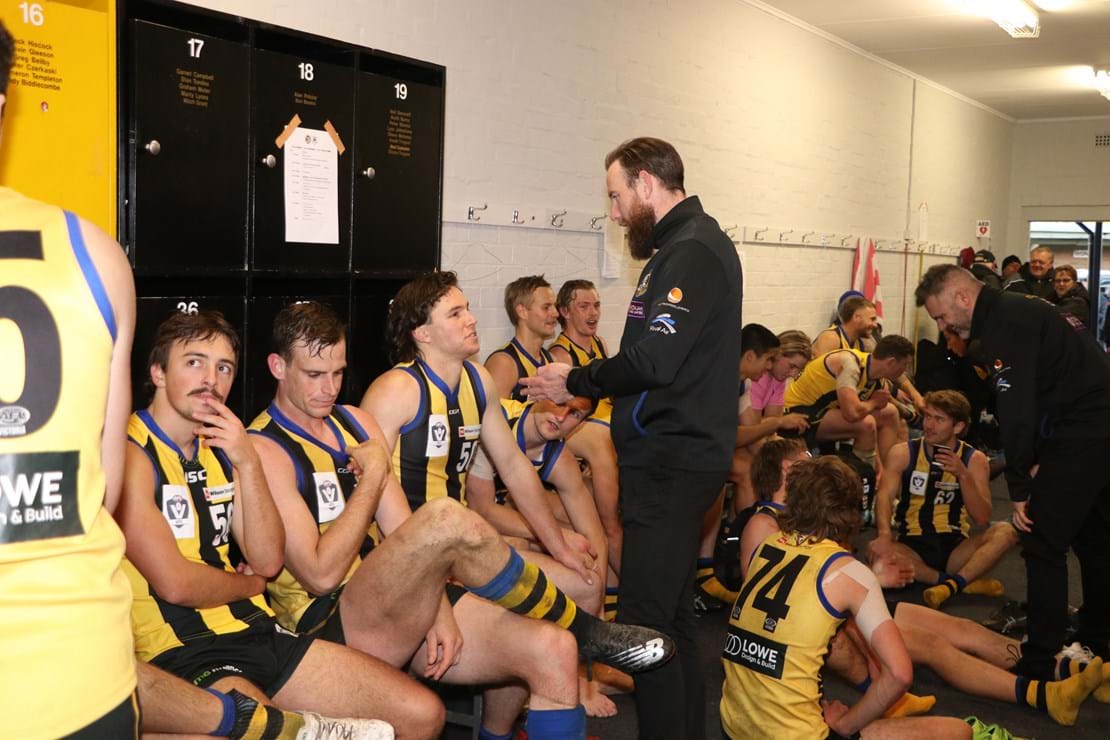 It was a beautiful day for football, with sunny conditions and a hint of a slight breeze as a boisterous home crowd turned out to watch their beloved Zebras in action.

It took a while for the Zebras to recapture their pre-bye form, as Richmond dominated possession early and took advantage by converting the first 2 goals of the match.

In defence, Darragh Joyce looked assured, repelling multiple inside 50 entries when his team was under siege.

The home crowd applauded some individual brilliance from Jack Lonie who lifted his team with a bone-crunching tackle in the centre square.

Vice-captain Goy Lok was also impressive through the middle of the ground, providing some desperately needed run and carry for his side.

The Zebras got their first two goals of the match through Dunell who continued to impress with his work close to goal.

Heading into the first break, the Zebras trailed by two goals, but the mood was buoyant, as they competed well towards the end of the quarter and played a high-intensity brand of football.

The opening minutes of the second quarter were played in Richmond’s forward half, with Lachlan Street kicking a long-range goal from the 50-metre arc to open the scoring.

Aided by a slight breeze, Chris Carey followed suit with a booming kick from a similar distance to get one back for the Zebras.

The Zebras capitalised on some excellent forward pressure, cutting the margin to just 11-points when Oscar Lewis goaled after running back with the flight of the ball to take a courageous contested mark.

Down the other end of the ground, the Zebras were equally impressive, as Oscar Clavarino and debutant Dan Frampton led the way with their intercept marking to stop several forward thrusts.

Richmond got one back through Thomson Dow, but the home side quickly recovered, as Cody Henness kicked his first for the afternoon.

The Zebras hard work earlier in the quarter paid off as they came home with a wet sail to finish a see-sawing first half, adding another two goals in red time to open up a six-point lead at the main break.

The third quarter started in a scrappy fashion as both teams failed to take advantage of some gilt-edged chances close to goal, with no goals scored in the opening seven minutes.

Finally, it was mid-season draftee Cooper Sharman who broke the deadlock for the Zebras, as his teammates got around him to celebrate his first in Sandringham colours.

When Clavarino goaled minutes later to extend the lead to 18 points — courtesy of a 50-metre penalty — the Zebras were well on top.

The Zebras locked the ball in their half through some frenzied forward pressure, led by Lewis who sent the crowd into raptures with a bruising run-down tackle on the wing.

Sandringham maximised their forward half dominance, with Lonie dribbling through his first of the afternoon to give the Zebras a five-goal lead at the halfway point of the quarter.

After winning a few centre clearances in a row, the Tigers hit back strongly, kicking three late goals to cut the margin to 10-points at the final change.

With the game on the line in a crucial last quarter, the Zebras were desperate to get the early jump and extend their slender 10-point lead.

The Zebras took advantage of a breeze that was getting stronger, as dark clouds set in over Wilson Storage Trevor Barker Beach Oval, kicking the first three goals of the quarter to reestablish their five-goal buffer.

Dean Kent was crucial for his side in a half-forward role, setting up several scoring opportunities for the fast-finishing Zebras.

Despite holding a big lead, the Zebras were forced to defend for long periods of the quarter, with Josh Caddy cutting the margin back to 23-points with plenty of time left on the clock.

Across half-back, Frampton showed maturity beyond his years, controlling the play with a couple of crucial marks to settle the Zebras when the Tigers were pressing.

After a tight-tussle towards the end of the match, Dunell popped up for his fourth of the game to seal a hard fought 30-point victory for the Zebras against a talented Richmond side.

Debutant, Dan Frampton said he enjoyed the experience of playing in his first game in Sandringham colours.

“It was a strange feeling because I was actually really nervous before the game but super excited at the same time, and even in the last quarter I was still super excited,” he said.

Frampton was full of praise for senior coach, Jake Batchelor, who has mentored him during his time at the Zebras.

“I like to mimic my game on how he used to play — he was a similar type of backman — so I like to take notes from him, especially on body work.”

Senior coach Jake Batchelor spoke about how pleased he was with his side’s response after a difficult first quarter.

“There’s always going to be ebbs and flows in a game, so it was really great to change the momentum so quickly,” he said.

“We nullified their handball game through the corridor and guarded the defensive space really well.”

The Zebras now move to 3-3 for the season ahead of Round 12 VFL action and sit in 13th, as they work their way up the VFL ladder after a slow start to the season.