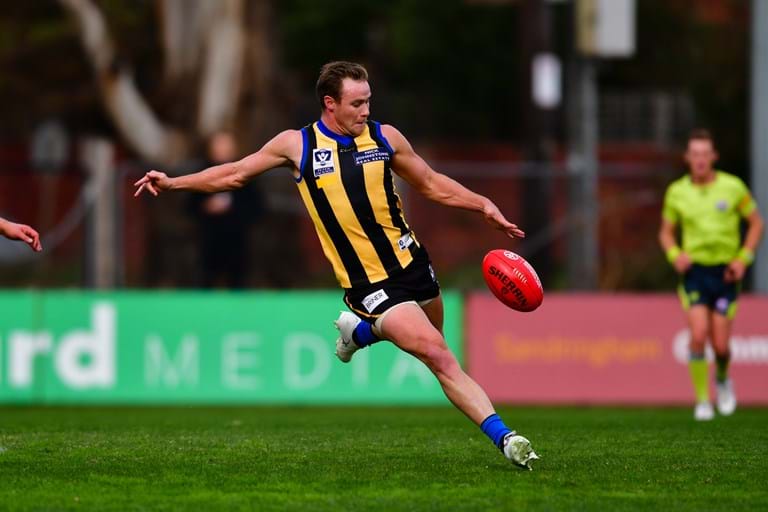 Sandringham have gotten their first win since Round 2 after a huge win against Werribee at home on Sunday. Following a tightly contested first quarter, the Zebras lifted their intensity when Werribee couldn’t, and reached their highest score of the season thus far.

Sandringham’s first goal came within the first three minutes from Josh Battle, but Werribee were quick to answer back and even up the score line. The first quarter was well-contested, with neither team letting go and making it a real shootout between the two sides. But quick goals from Nathan Smith and Rowan Marshall, gave the Zebras a handy 15-point lead going into the second quarter.

The intensity from the Zebras increased to another level in the second as the boys left the Tigers behind, scoring five goals to one. Consecutive goals from the Zebras left the Werribee boys goalless until late in the quarter, which gave us the edge going into the second half, holding a lead of 42 points.

Contributions on the scoreboard came from just about everywhere, as the boys shared the ball around well all over the ground. Tackling pressure was outstanding and work around the stoppages was much better than it has been in previous weeks. Brede Seccull had 20 touches by half time and his presence on the field for his first year at the Zebs continues to be influential.

The second half started with Sandringham coming out with all the momentum. Connellan scored his third goal for the day in the third minute of the quarter, and young gun Hayden McLean followed soon after with his first for the day.

But a lapse in performance midway through the third quarter allowed Werribee a taste as they reduced the margin with two quick spurts in play for consecutive goals. But the Zebras held tight, and going into the final quarter held a lead of 47 points.

Despite the significant margin, Werribee kept at the Zebras and were not going away so the boys really had to keep working hard to maintain the lead. But the Zebras were able to keep

their intensity at an impressive level all day and were able to come out 51-point winners.

St Kilda listed midfielder David Armitage was one of the best on ground, with 39 touches for the game and laying 10 tackles. He worked hard all day in applying pressure, making a solid case for senior selection next week.

Co-captain Myke Cook really stood up this week, and led from the front with 27 touches, laying 4 tackles and kicking a goal, making himself one of 13 individual goal kickers for the Zebras.

In his first game in Zebras colours, Jackson Hille made his mark on the game with 16 touches and 8 marks. He laid 4 tackles and applied good pressure along the half back line. An outstanding performance from the 18-year-old.