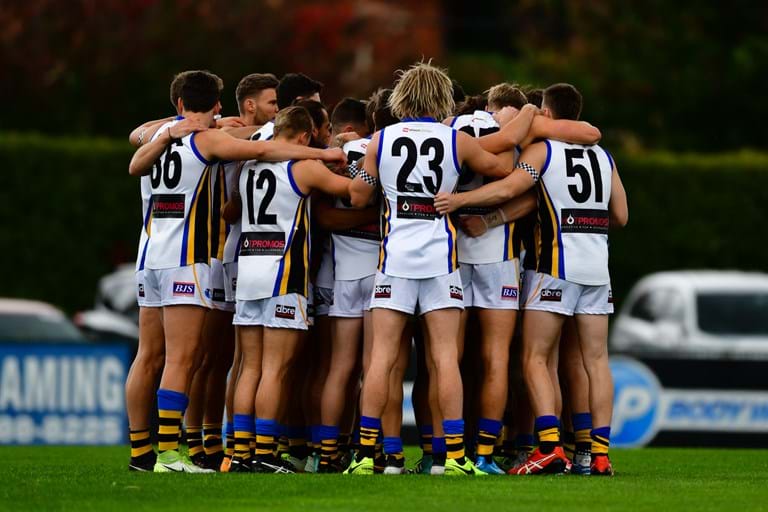 The Zebras were unable to bring Box Hill’s dream opening run to an end this weekend, suffering a 64-point loss on Saturday in the Blue Ribbon Cup. Sandringham struggled to convert against the ladder-leaders, in a match that was tightly contested everywhere but between the sticks.

Box Hill scored the first goal of the match and the Zebras were quick to answer back, but the Hawks just continued to pile on the goals making it increasingly difficult for our boys to stay in it. Goals from Tom Lamb and Daniel McKenzie in the first quarter kept us in it, with returning Saint Nathan Freeman working hard around the ball and showing promising signs.

At the end of the first quarter the Hawks led by 20 points, giving the Zebras plenty of room to improve. At the beginning of the second quarter, Jack Lonie scored opening up the game and giving the Zebras a sense of hope. But the Hawks weren’t going to let us have it that easy, converting much better and not allowing Sandringham any opportunity.

Despite dominating the time inside forward 50, Sandringham were unable to convert and make the most of their opportunities. Box Hill were hard to stop defensively and managed to stop the Zebras scoring when the ball was in possession, making it difficult to score.

At half time, Box Hill had the momentum, despite a hard-fought contest from the Sandy boys. Brede Seccull’s efforts to create pressure on Box Hill’s midfield were outstanding, and his tackling pressure was crucial in moving the ball forward.

In order to get the four points, Sandringham would really have to dig deep and work harder at applying more pressure inside the forward 50. Box Hill’s ability to lock it down and move the ball forward would otherwise be difficult to compete with.

The second half began with a much higher intensity from both sides, with neither team being able to score until the tenth minute, when Box Hill extended their lead. Even though the Zebras had a much more physical start in the second half, the Hawks were just simply working harder and made themselves difficult to stop once they got the ball moving inside 50.

Going into the final quarter, Box Hill had a lead of 51 points, creating a difficult task for the Sandringham boys. The fourth quarter lacked intensity as it appeared to be all over.

At full time, the boys had been unable to make a dint in the deficit and went down by more than 10 goals. But there were some positive individual performances to come out of the loss.

In his first game since July last year, injury plagued, St Kilda listed midfielder Nathan Freeman had 28 disposals and was making good use of the footy. His tackling pressure was outstanding and he played with a sense of confidence that had an impact on his Sandringham teammates.

Brede Seccull had another exceptional performance and was moving the ball inside the forward 50 really well. He laid 6 tackles for the game and had 21 disposals, making good space to be an option with 4 clearances from stoppages.

Ed Phillips had 37 touches and is building a strong case for AFL selection.