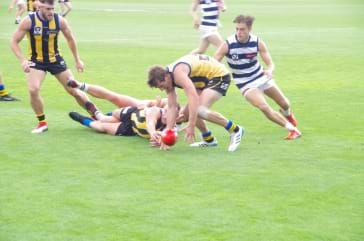 Sandringham have backed up their round one victory with another tough win against Geelong away on Sunday. After conceding the first three goals in wet conditions, Sandringham lifted the intensity in what was a low scoring affair in windy weather.

The first quarter was not a desirable one for the Zebras, who only scored three points, while the Cats scored 3 goals. But there were good signs, with the tackling pressure evident from the first bounce.

Goals to Billy Longer and Tom Lamb in the second quarter kept the Zebras’ spirits up, and going into half time there were only 8 points in it. The weather had started to clear up, but the wind was still proving to be an issue for both sides.

David Armitage and Maverick Weller both had a prominent impact on the first half, gathering 18 and 14 disposals in the midfield respectively. The contest improved drastically in the second quarter, and despite small issues with accuracy, the ball was moving into our forward 50 much better and we reaped the rewards of that.

Going into the second half, neither team were clearly on top. It was still anyone’s game and the Zebras were going to have to keep up the intensity if they wanted the four points. After they had let the margin get back to 8 points, the Cats were starting to feel the pressure and would have to continue fighting hard if they wanted to hold onto that lead.

From the first bounce of the second half, it was on. The third quarter began with quick goals from both sides. From there, it was goal for goal all quarter and the Zebras were able to get the last of the quarter to bring the margin to just 2 points going into the final term.

At the start of the last quarter, the Cats came out firing, scoring the first two, and it wasn’t looking good for the Zebras. But when Beau Bailey kicked two back to back goals to bring the margin back to 2 points, the intensity lifted again.

Jonathan Haidon really stood up in the final quarter as well, with a goal to bite back and get back in front. His impact was really felt in that final quarter with 3 kicks into our forward 50 including that goal.

27 minutes into the final term, the Zebras had the biggest lead they’d had all day, with an eight-point buffer. But the Cats were able to bring that back to just 2 in the dying moments of the game. Sandringham though, were fierce until the end, and managed to hold off the Cats until the siren finally went.

Efforts from David Armitage and Billy Longer had a really positive impact on the side. Armitage had 34 disposals, and 22 of those were contested. His tackling pressure was right at the level that Sandringham players pride themselves on, with 7 for the match. Longer had 53 hit-outs for the match, and proved himself superior over the Geelong ruckman Zac Smith, he even managed to snatch himself a goal to help get Sandringham over the line.

Sandringham will be looking to go three from three next week when they face Port Melbourne at Trevor Barker Beach Oval on Sunday at 2pm.