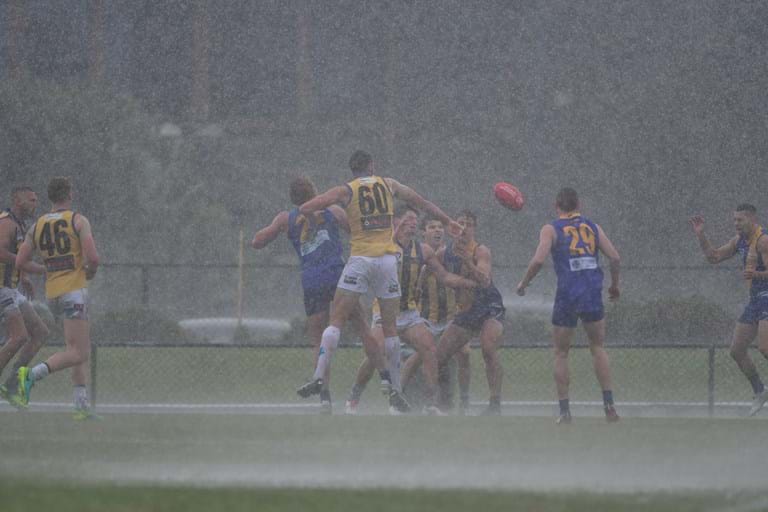 It was a bitter pill to swallow this week, as Sandringham remained goalless for the first time in their 89-year history. Suffering a loss against Williamstown, it was a tough game in less than ideal conditions. The trip across the Westgate was largely unsuccessful, as everyone was forced to work hard for possessions, and a sheet of rainfall made it near impossible to anticipate the next kick.

It was only the fourth minute when the weather really turned it on and it began pouring down hard on Burbank Oval. The first score for the match was a behind, which came in the 17th minute from Kade Answerth, followed by a number of behinds each time the ball was down our end that quarter.

At the first break, the Zebras were 5 points up, having kept the home side scoreless. The rain had turned the oval into one giant puddle, as every step and bounce of the ball caused a huge splash. The ball was heavy, making it near impossible to get a clean possession, or a decent kick away.

In the second quarter, the ball was down their end of the ground the whole time. The Zebras did not score, while the Seagulls made the most of their opportunity and had six scoring opportunities converting two goals.

It was made obvious that the wind was having a clear impact on the game, and if Sandringham wanted to get the win they would need to capitalise on every opportunity that came their way.

But in the second half, the Zebras again failed to make the most of their chances, and scored just three behinds in the third quarter, and one in the last. Despite keeping Williamstown to just one major in the third, the real damage was done in the final term.

As the weather began to settle slightly, the Seagulls were able to turn it on and really use the wind to their advantage. Sandringham were simply not ready to compete, as the opposition kicked eight goals in the final term and were left pretty much unguarded.

The wet weather meant that every opportunity needed to be taken head on, and Sandringham simply failed to do so. The heavy ball made it difficult for kicks to make the distance, and the ball was kept low – just 50 marks were taken for the game between the two sides.

Tom Hickey was a shining light on a gloomy day for the Zebras, with 58 hitouts and eight tackles. As was returning St Kilda veteran Sam Gilbert as he collected 24 disposals, 17 of those being contested.

“It was really tough conditions in a game that was already difficult to score; we’ve never been involved in a game where we haven’t kicked a goal,” said coach Aaron Hamill.

“Williamstown adjusted to the conditions a lot better than what we did. We fought it out, but we were exposed in the contest against an opposition who just wanted it more than what we did.”

In a tough, contested match, the Zebras were simply beaten by the better team on the day. Unfortunately, the Seagulls won the ball out of congestion much better and Sandringham struggled to find the big sticks.

With the bye this week, the Zebras will have a bit to think about during the week off.