The Southern Saints continued their charge towards VFLW finals glory, defeating Port Melbourne by 34-points in an action-packed elimination final at ETU Stadium. 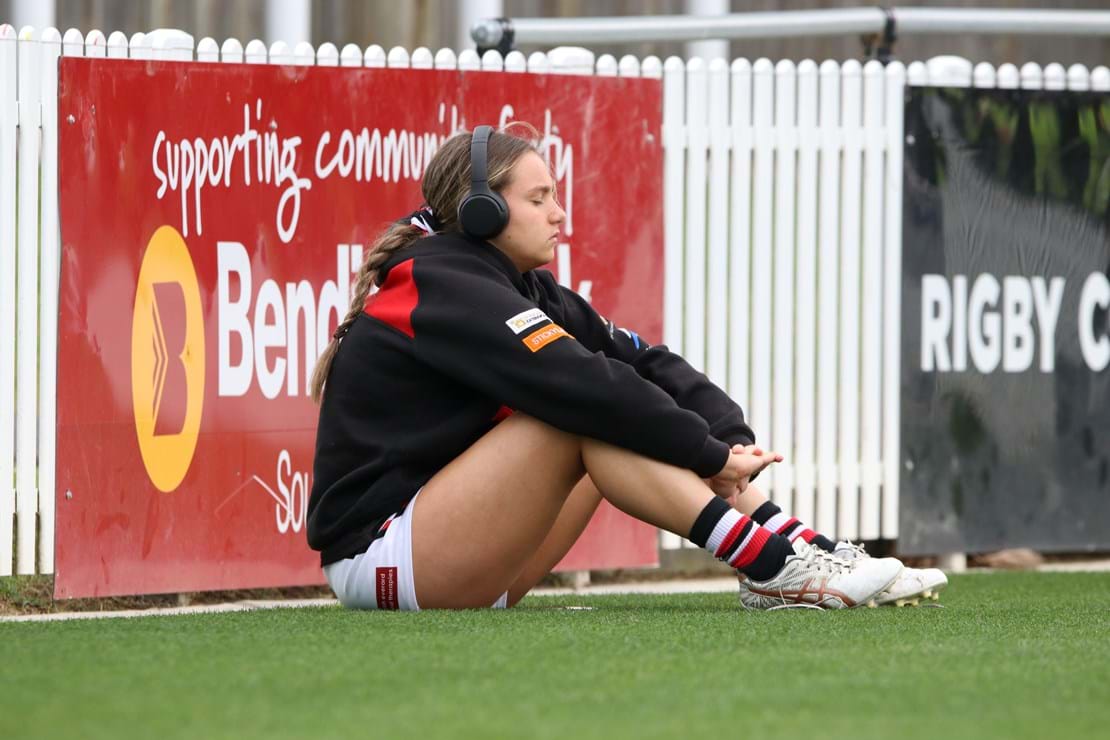 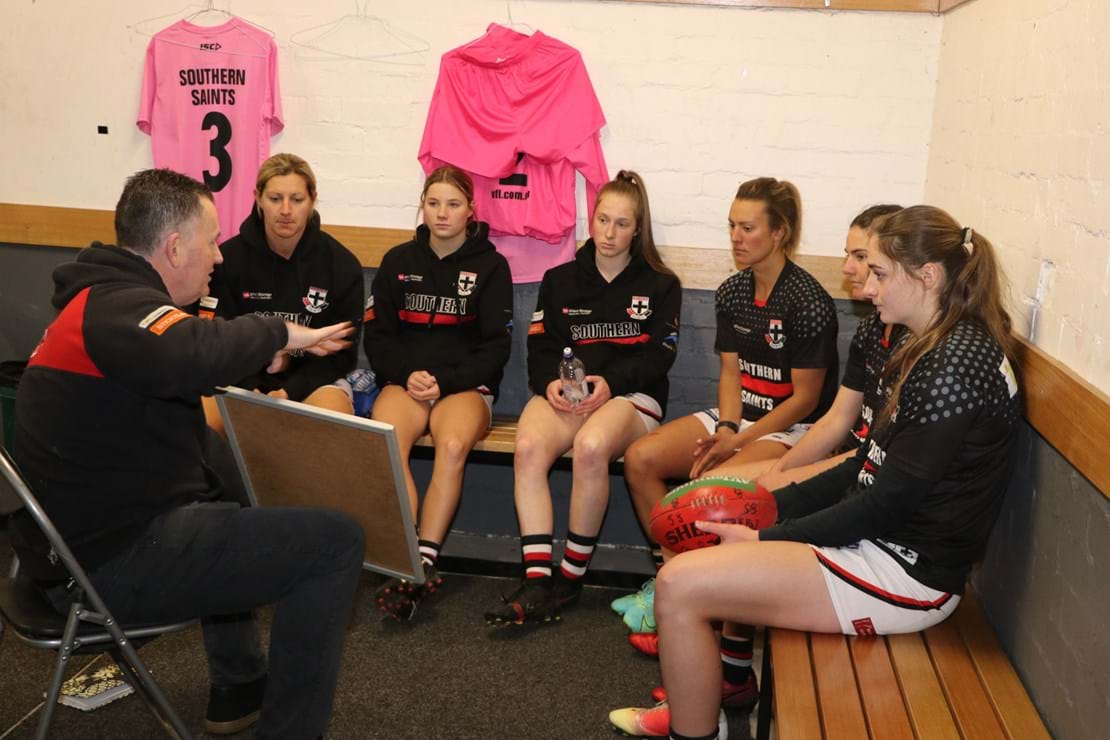 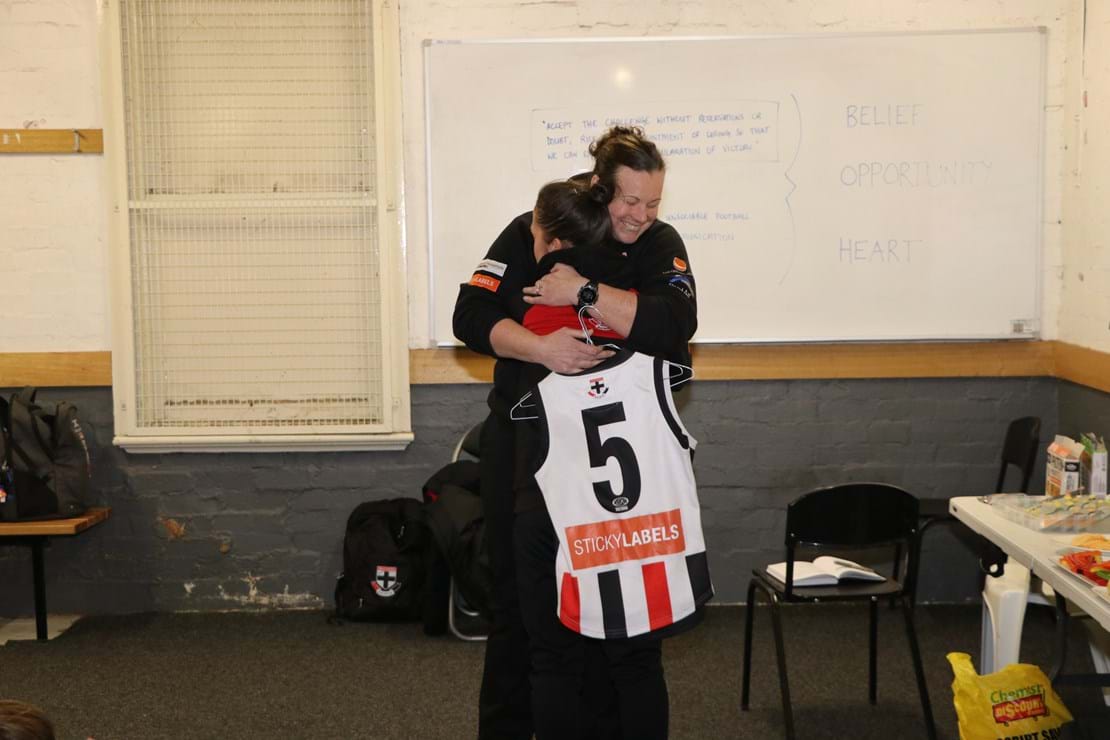 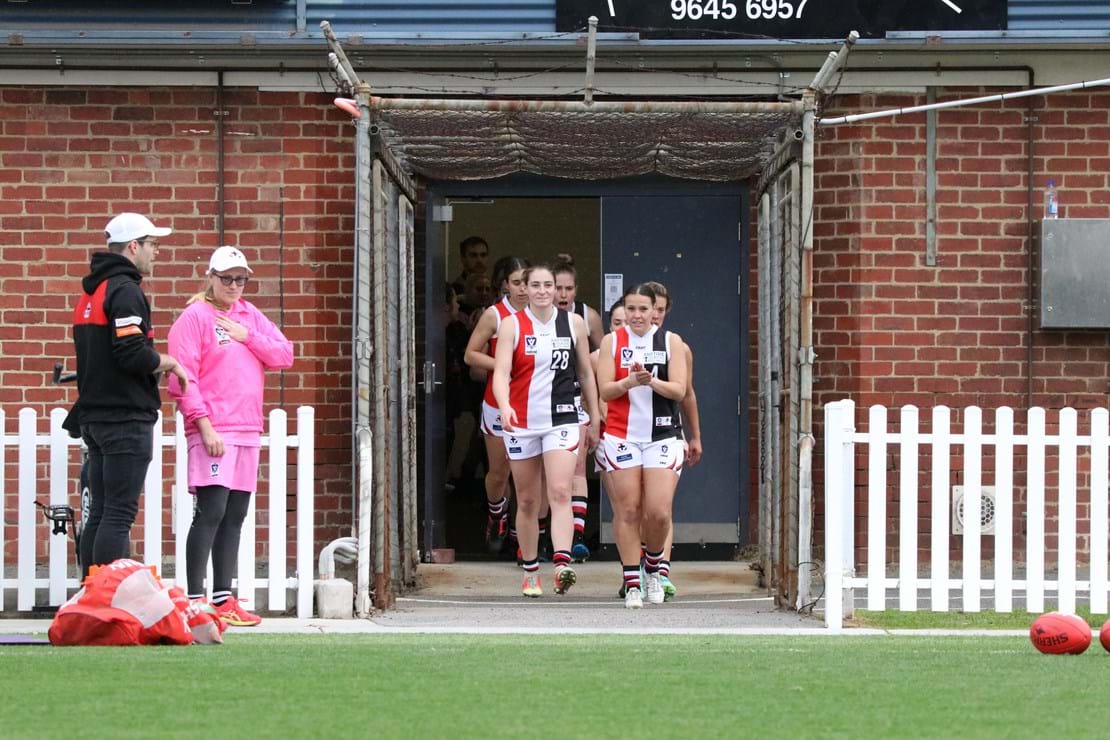 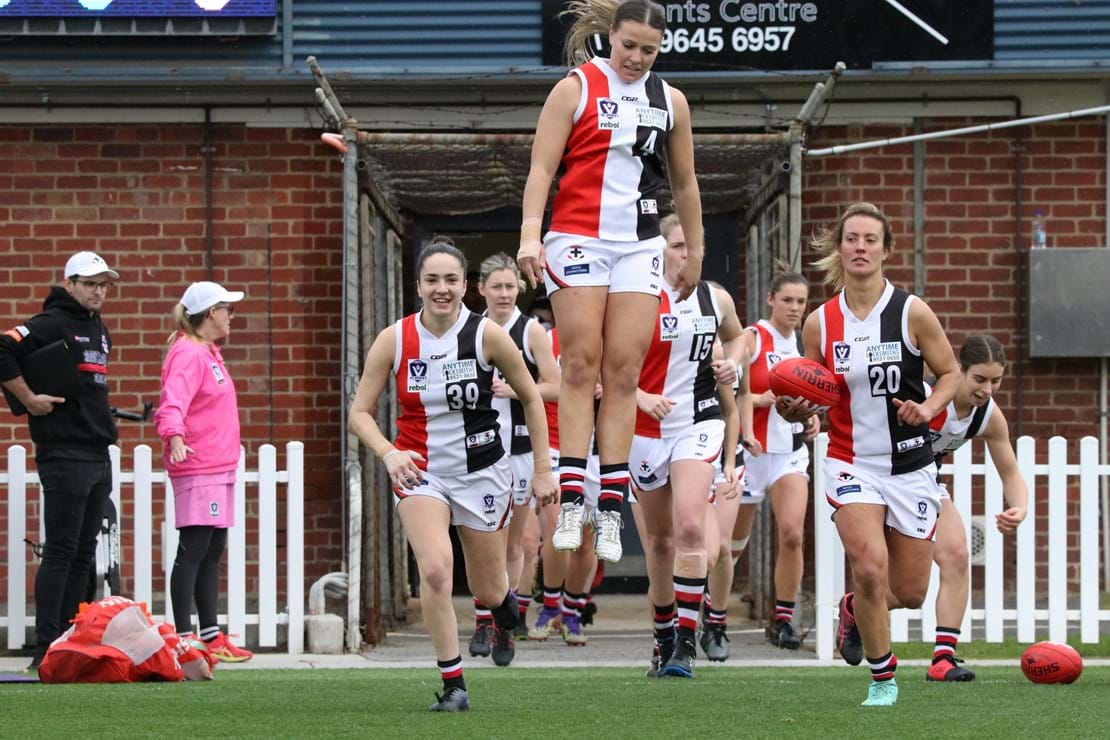 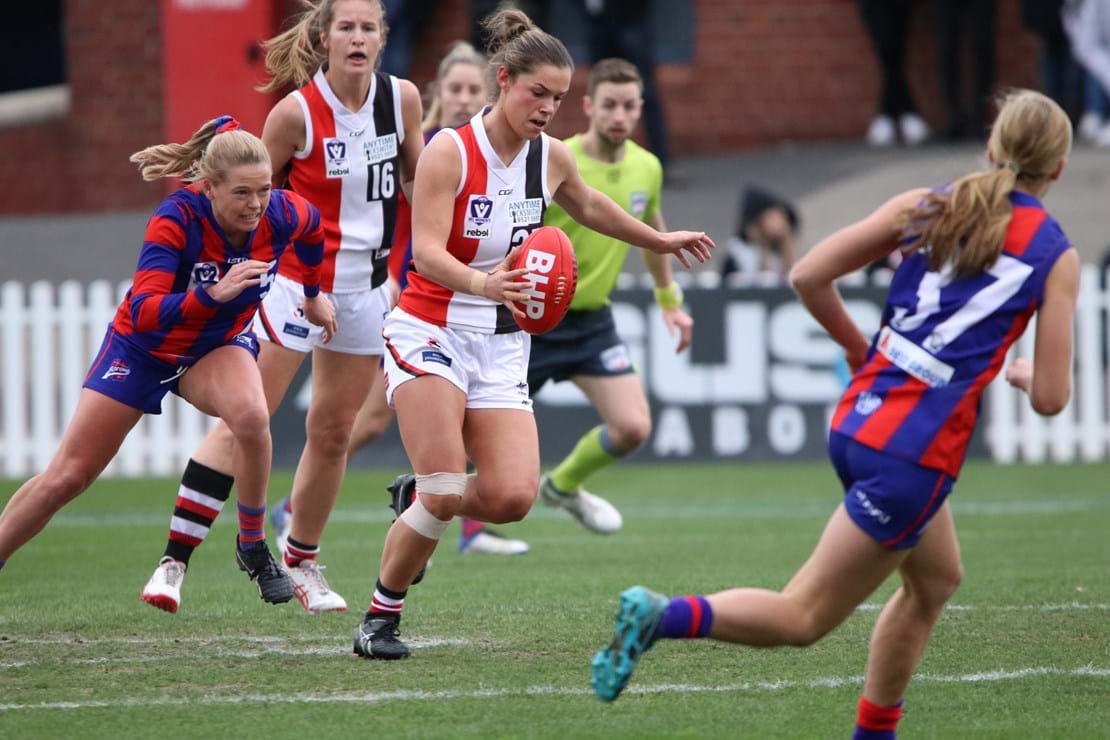 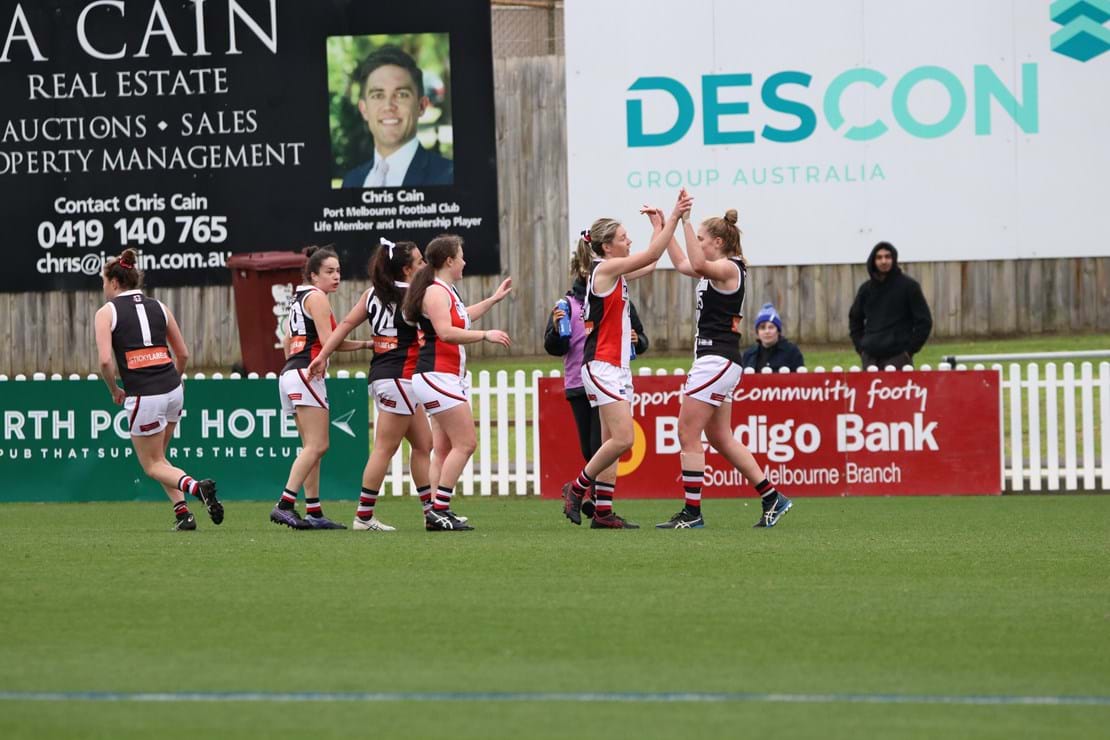 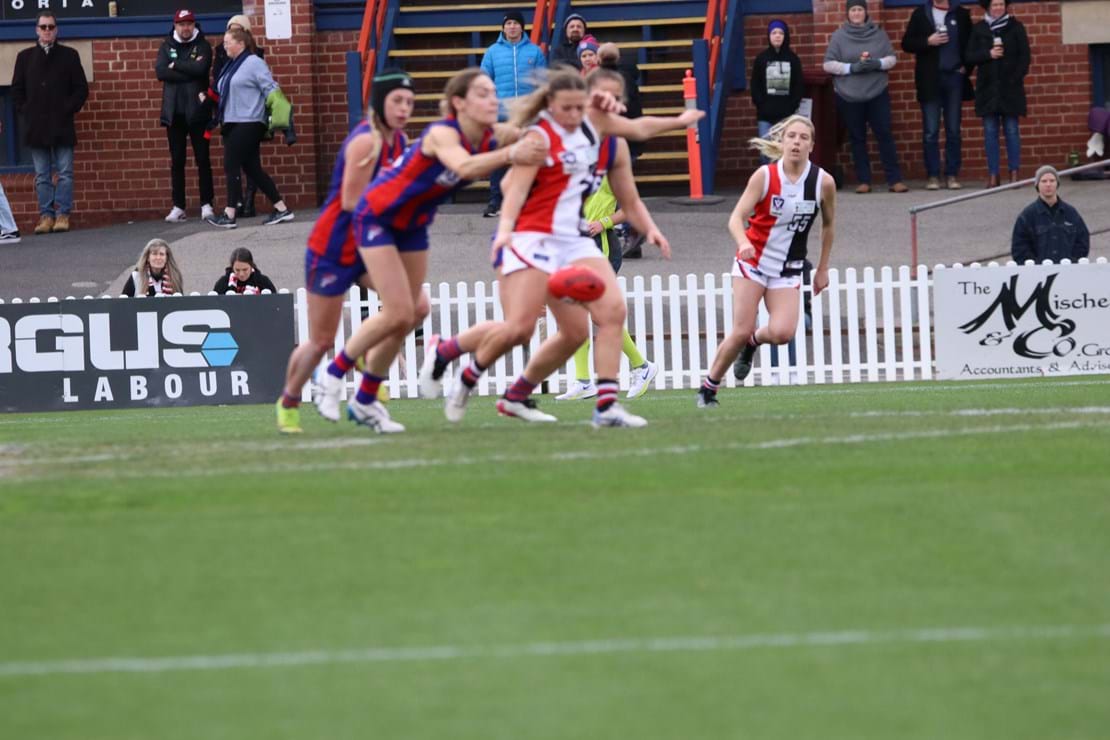 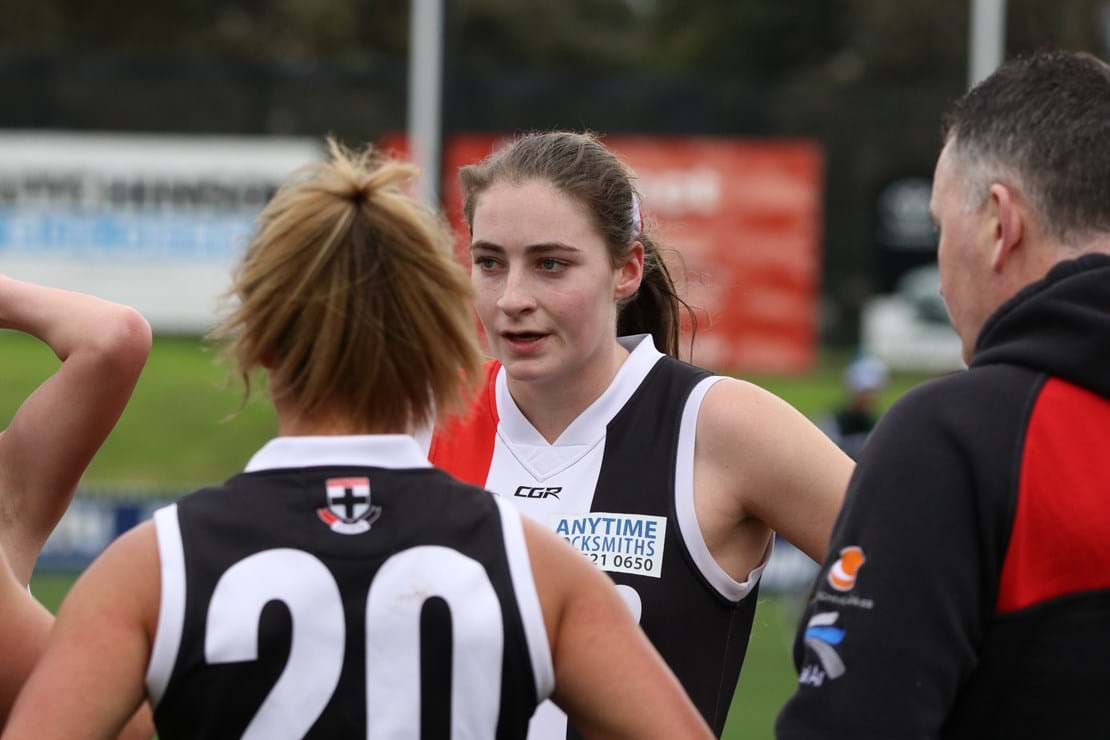 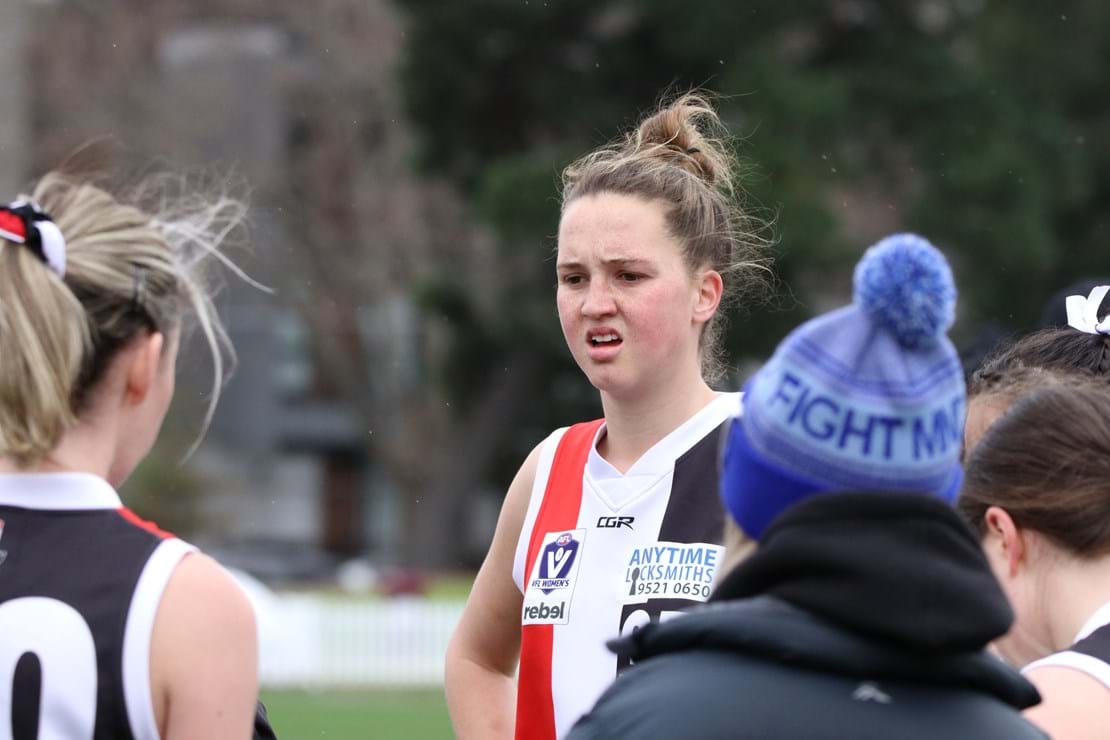 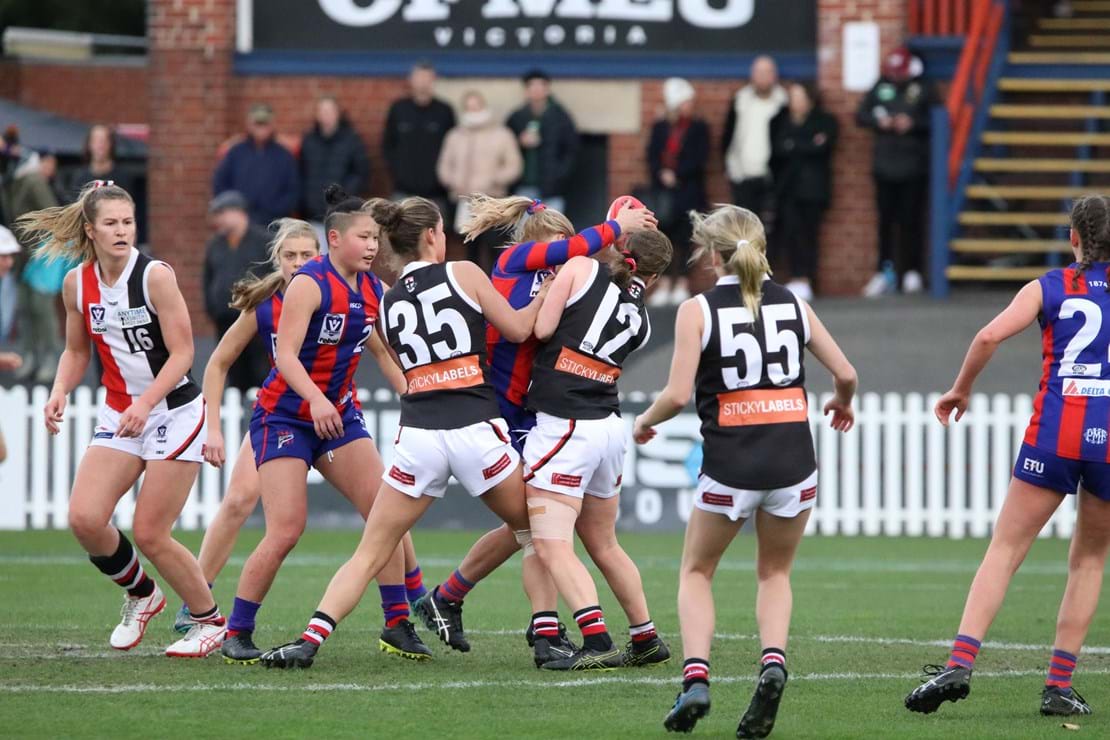 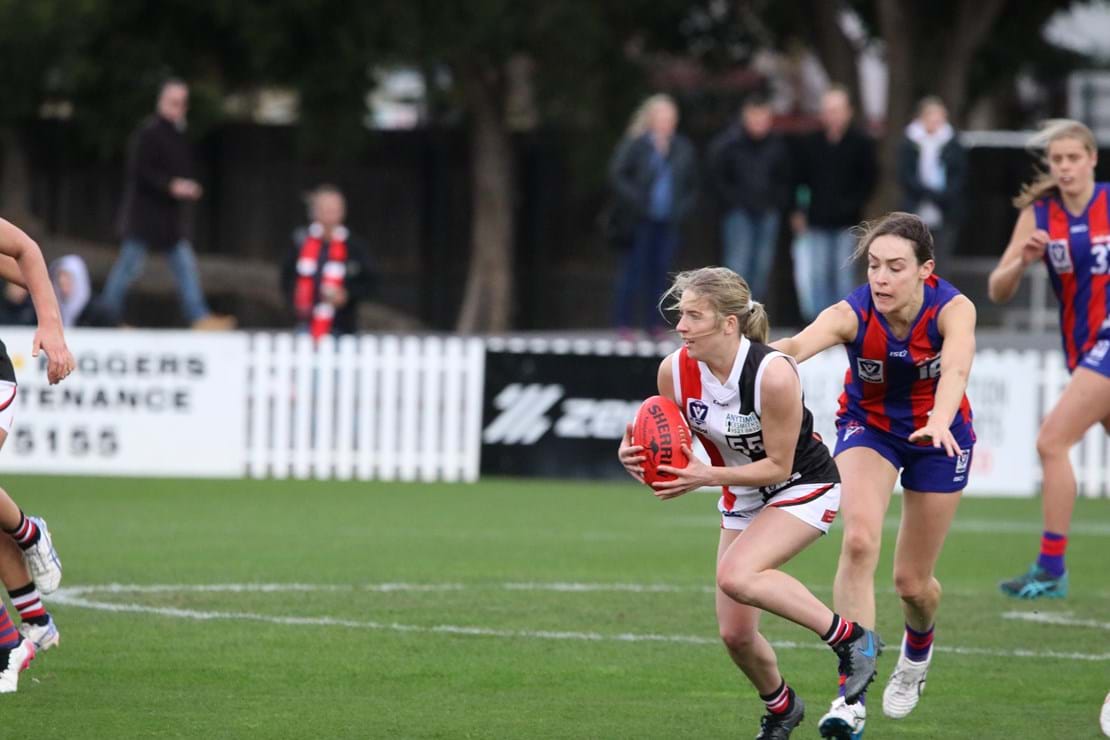 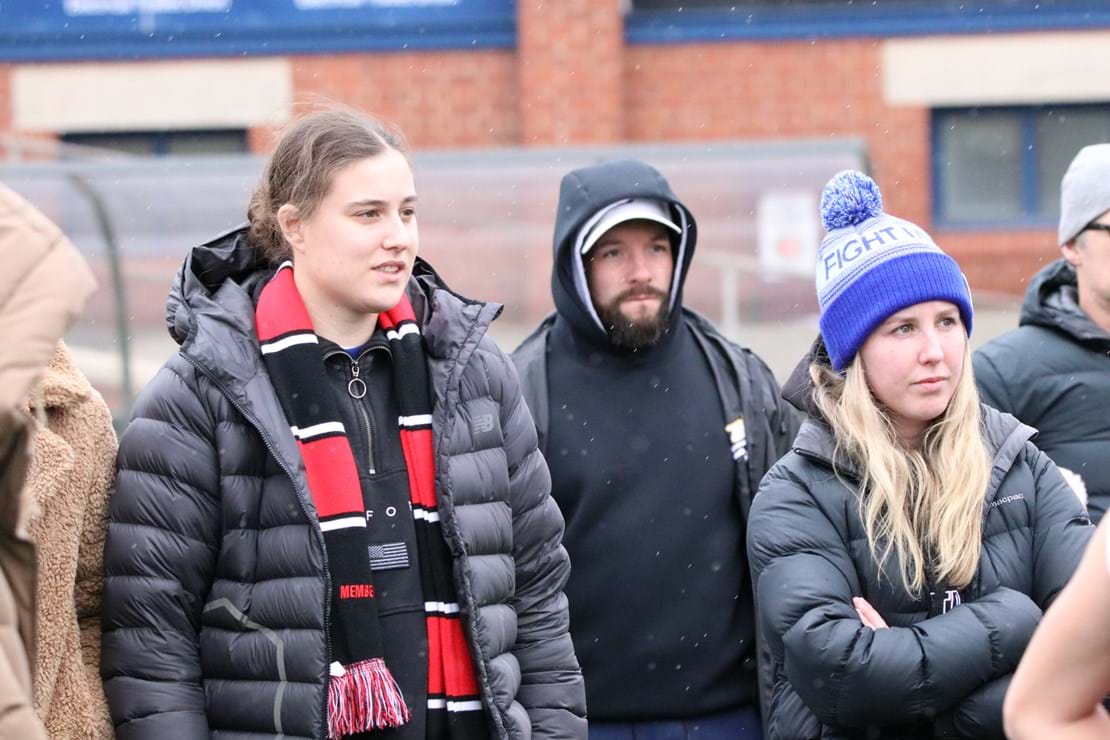 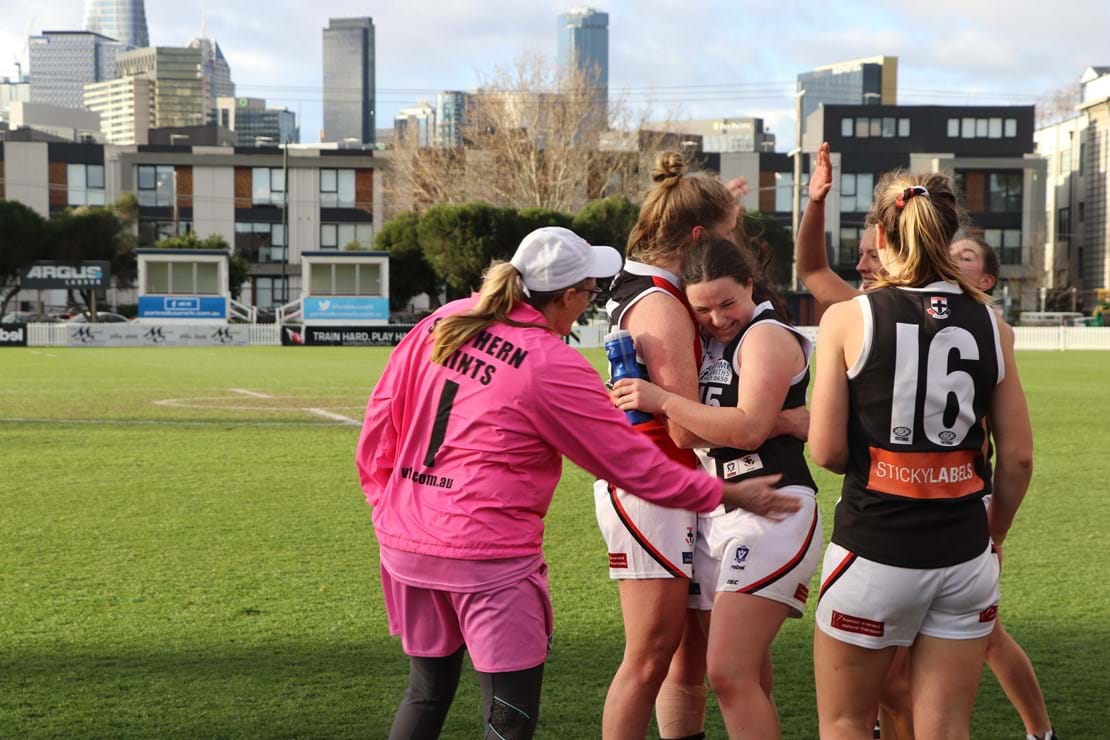 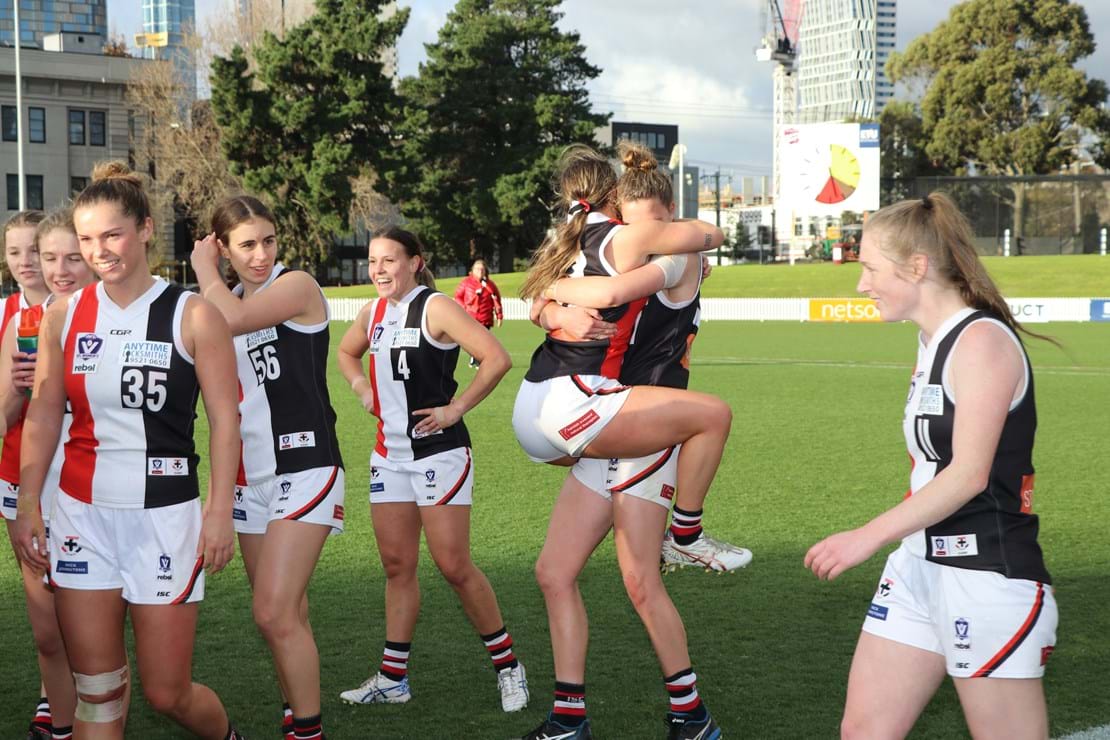 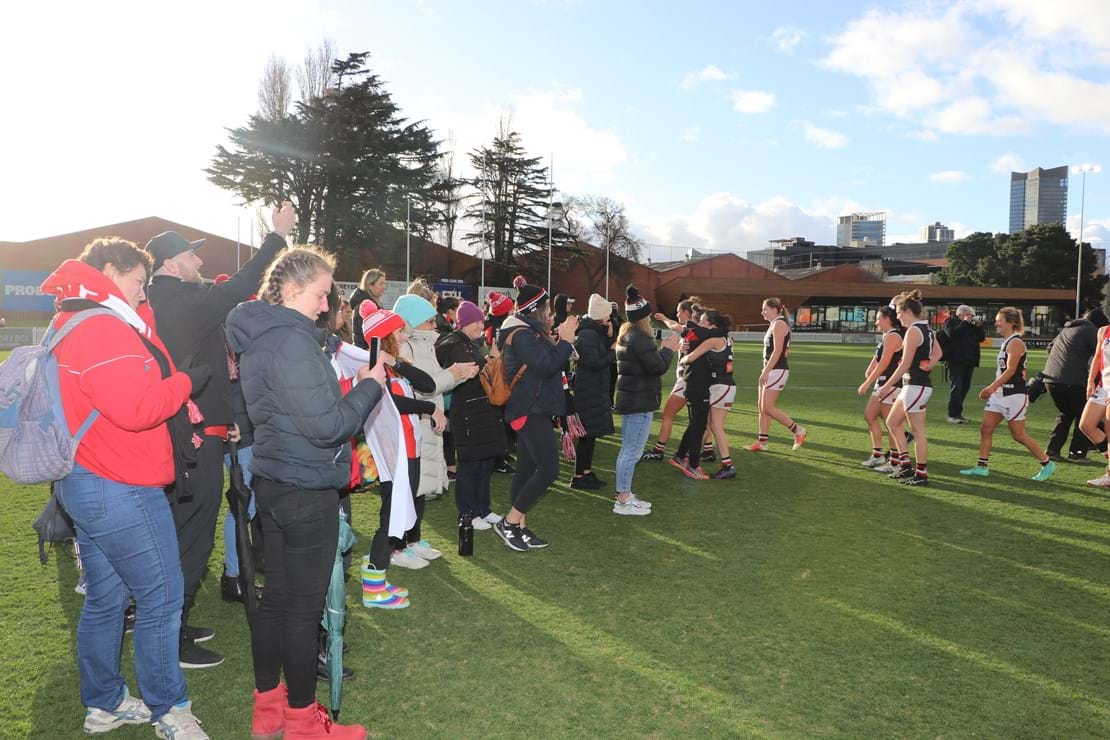 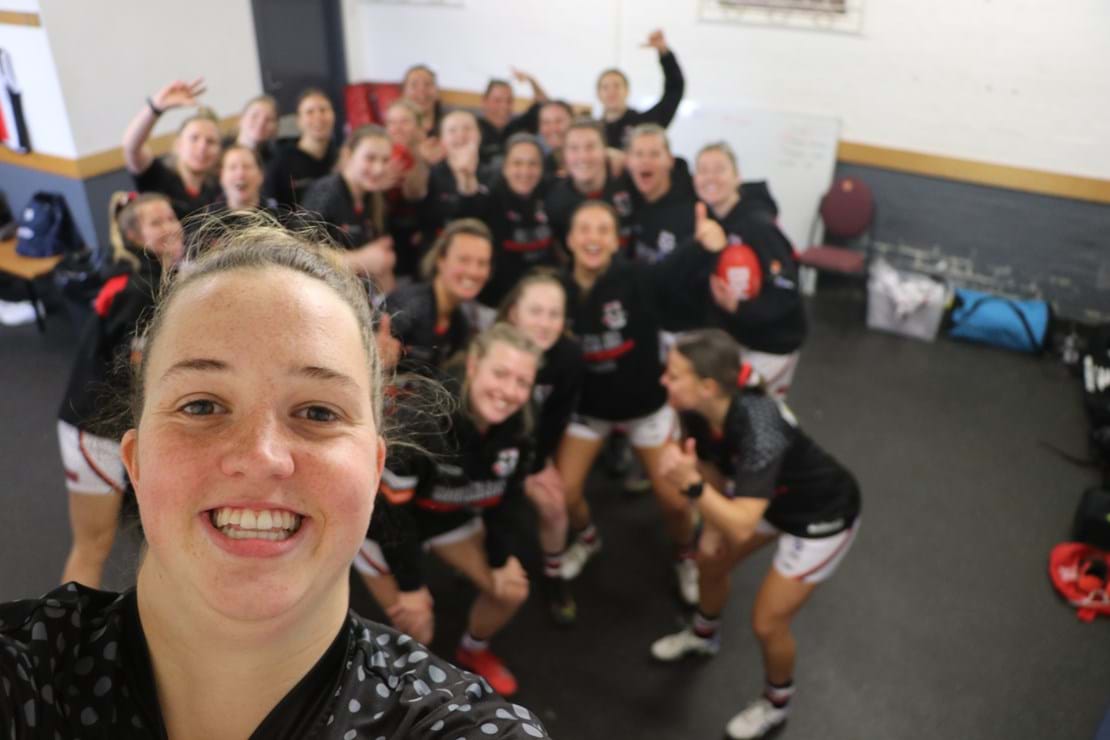 The match was played in front of a large and vocal crowd as fans from both sides turned out to watch the girls in action.

Rain began to fall at the start of play, making it harder for the sides to handle the ball cleanly.

It was Port Melbourne who did the early attacking as they kept the ball inside their forward half, but they struggled to score in the windy and slippery conditions.

Hannah Stuart started well for the Saints, applying some good tackling pressure around the contest.

It took until halfway through the quarter for the first major to be scored as Brooke Vickers finished off a chain of handballs for Port Melbourne which sent the home crowd into a frenzy.

The Saints hit back quickly through Tayla Kearns, who started strongly up forward and managed to get on the end of a Tyanna Smith kick for the Saints first.

The Saints were kicking with the wind in the second term, but conditions were extremely tough for football as the rain began to fall harder and the breeze swirled.

The game quickly became a contest of territory where any method of moving the ball forward was a good one.

Alexandra Hynes was working hard in the ruck as the conditions called for multiple stoppages, and the Saints had some early chances through Smith and Stuart, but neither were able to convert.

Tara Bohanna was given a 50 metre penalty midway through the quarter which allowed her to goal from square, levelling the scores.

The Saints were pressing the issue but they struggled to make Port Melbourne pay as the rain continued to fall.

Finally, the Saints got their goal through Kayla Ripari who finished with a snap at the top of the goalsquare to give the Saints a small 9-point buffer into half time.

Under lights and with a semi-final spot to play for, the Saints started the second half where they left off as a precise kick from Bohanna led to a Jess Matin mark and goal.

The Saints were threatening to blow the game open, as they continued to attack against the wind.

The sun broke through for a fleeting moment and cast a picturesque light over ETU Stadium, and it seemed to have an effect on Port, who scored a goal against the flow of play to cut the margin to 10-points at the midway point of the quarter.

Gabi De Angelis was looking dangerous across half-forward, showing a clean set of hands in slippery conditions, but the Saints couldn't add any further majors, and as the three-quarter-time siren sounded, the Saints held a small lead with a quarter to play.

The season was on the line for both teams as the last quarter got underway and the pressure could be felt across the ground, as the crowd let their collective voices be heard.

The Saints did all the attacking early, but again some wayward kicking kept Port Melbourne in the game.

Midway through the quarter, the Saints were rewarded for their effort as Bohanna ran into an open goal to open up a 20-point lead.

The Saints looked to be in control and a brilliant Matin kick out of mid-air gave them an unassailable 28-point lead with 5 minutes to play in the final quarter.

Although the skies had cleared, it was suddenly raining goals for the Saints and De Angelis was rewarded for her hard work all day as she kicked her first.

The Saints were too strong in the end, coming out convincing winners in tough conditions as they romped home by 34 points and booked themselves a spot in the semi-finals.

Southern Saints coach, Dale Robinson said she was delighted with her side’s ability to put together a solid performance across the whole game.

“I thought we played some really good footy over four quarters which we probably haven’t done for most of the season, but today, we put the pressure on right from the start and to only give away two goals when they had a pretty good wind advantage was really strong,” she said.

“I think Deanna Joliffe really stood out, we gave her a tagging role on Ellie Mckenzie and she kept her relatively quiet all day.”

“Hannah Stuart and Madi Cap (Capsalis) were strong in the middle and down forward Jess Matin, Gabi De Angelis and Tayla Kearns stood up really tall.”

The Southern Saints move onto the semi-finals where they’ll face Geelong, with details of the clash to be announced during the week.