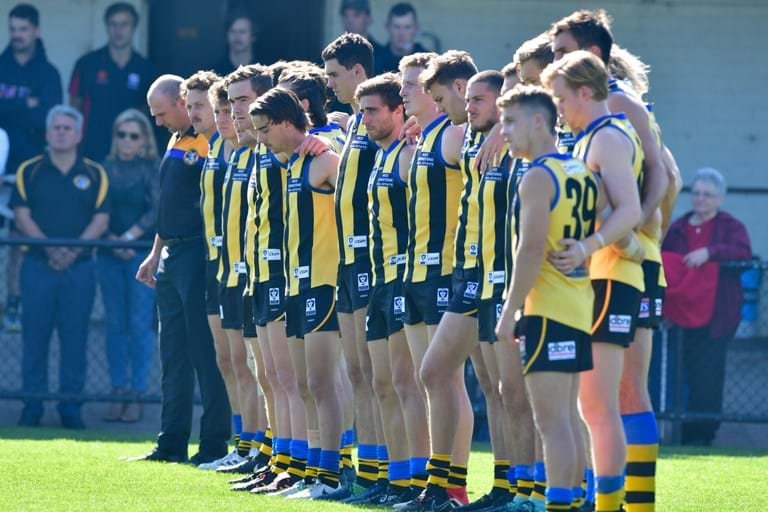 Sandringham have suffered their first loss this week at the hands of reigning premiers Port Melbourne. Despite beautiful, sunny conditions the Zebras were unable to retain the Tony Scully Cup in front of a stellar crowd on Sunday in the ANZAC round. It was a tight contest right up until three quarter time, as the previously undefeated Zebras really took it to one of the best in the league.

The Borough came out firing, with a goal in the first minute and the game was on. It was a tight contest from that moment on, and Sandy really fought hard to get the ball into our forward 50. Unfortunately, our conversion in front of goal was an issue as the boys really struggled to capitalise on the opportunities they gave themselves.

There was plenty of attacking pressure from our side, fiercely led by Ed Phillips and David Armitage, which allowed the Zebras to keep the ball in the forward line and eventually led to our first goal.  However, Port Melbourne were not going to let the game get away that easily, scoring two more quick goals. But Sandringham held the lead going into the second quarter despite their inaccuracy, as they had eleven scoring shots just in the first quarter.

The second quarter provided spectators with the same tight contest as the first, with goals from Nathan Wright and Tom Lamb. But Port Melbourne, again not to be outdone kicked two in a row to make it really difficult to hold any real momentum. Brede Seccull’s tackling pressure in the second quarter was outstanding, as he led the way with 8 disposals and 5 tackles. At half time, Port Melbourne had taken the lead, mainly due to the Zebras again struggling to convert their opportunities.

The first half had good intensity, and both sides were playing with everything they had. However, the challenge of accuracy and conversion was a real issue, and going into the second half, it was definitely something for the boys to work on.

Tom Lamb started the second half with a bang, as he scored the first goal of the third quarter within the first two minutes as a result of an incredible team effort to move the ball out of the Borough’s forward line. But Port didn’t take long to answer as they snatched back the lead, before Armitage answered back with his first to bring the margin back to just 1 point.

The conversion in the third was a lot better, and for both sides it seemed like the goals just kept on coming. Tom Lamb scored his fifth for the day in spectacular style, with a scissor kick over his head which put him in contention for the PJVFL Top 5 Plays of the Week. But it was back and forth the whole quarter, which meant that to get the win Sandringham would really have to step it up in the fourth quarter.

Unfortunately, that’s where it all came undone. In what was an intense final term, Port Melbourne came out on top scoring the one and only goal for the quarter. If Sandringham were accurate earlier on in the game, it could’ve been a completely different match.

In his first game back for the club since injuring himself in a practice match against Williamstown, Brede Seccull had an unbelievable game. His pressure was outstanding all day, which resulted in 10 tackles. He had 31 touches and was easily one of the best on the ground.

David Armitage had another outstanding game for the club, playing with a point to prove. He was the number one disposal getter with 33 touches for the match, and 19 of those contested. His attacking pressure was vital in Sandringham’s fight against Port Melbourne.