Saints and Bombers inseparable at The Hangar

The Southern Saints have come away from The Hangar with two points following a draw with the unbeaten Bombers. 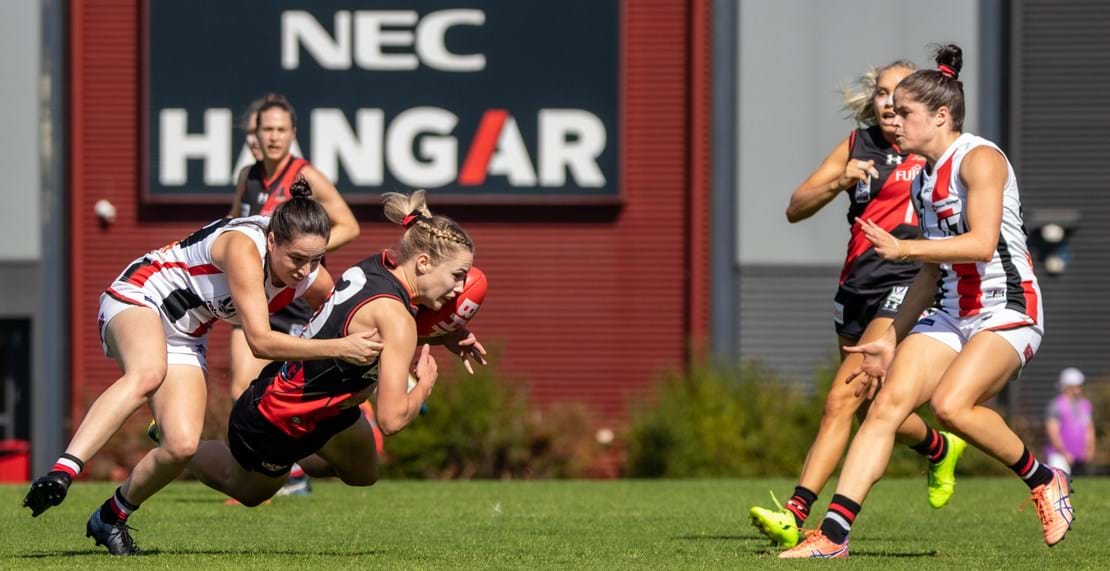 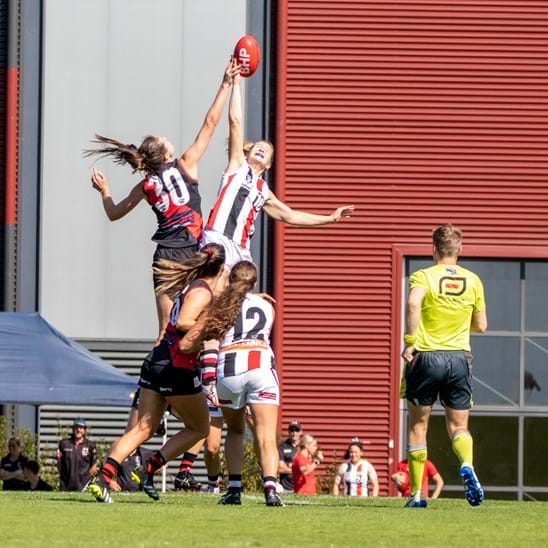 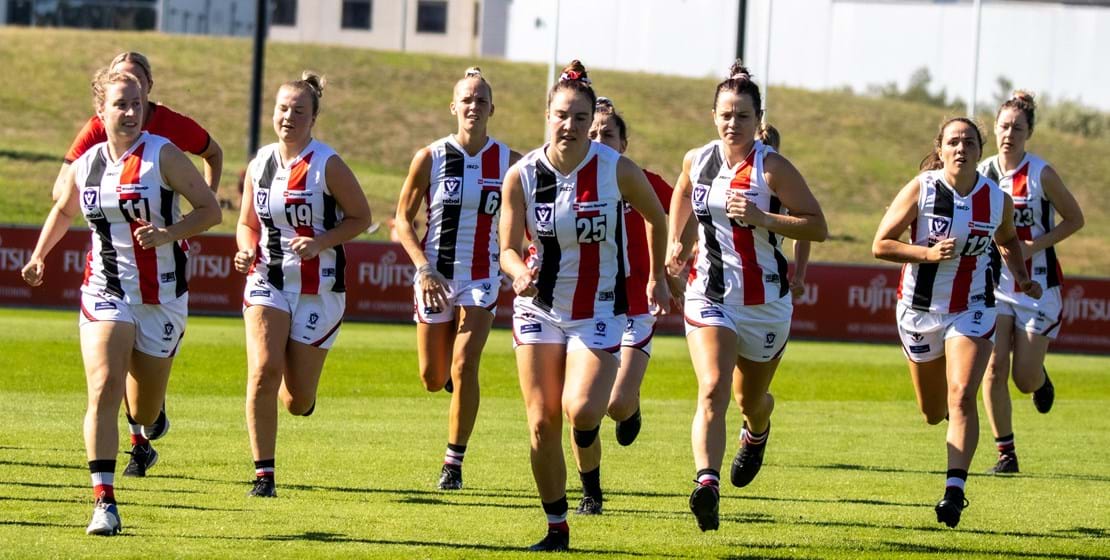 In an all-time classic on Sunday, we picked up our first ever draw and continue our unbeaten streak against Essendon.

Hannah Stuart kept up her unbelievable start to the season, finishing with game-highs in disposals (22), clearances (9), kicks (19) plus had six tackles and a goal.

Winnie Laing continued on her merry way and worked hard on the wing. She had 15 disposals, four tackles plus two clearances on the day.

Olivia Flanagan came back into the side for her third game of the season and provided some X-Factor up forward, kicking two goals and having 11 disposals plus two marks and Alexandra Hynes fought gallantly in ruck against Simone Nalder, acquiring 24 hitouts, eight disposals as well as an equal game-high seven tackles.

On a warm and windy morning at the headquarters of Essendon, we were kicking with the wind to begin the contest.

After locking it inside our forward 50 in the first few minutes, Stuart snapped truly to kick the first goal of the contest in the first three minutes. But Essendon responded a few minutes later after a quick transition play.

Two minutes later we moved it quickly from our defensive half, with Olivia Flanagan selling Lauren Caruso some candy and kicking her first on return and our second inside the first eight minutes. Essendon then responded once more only a few moments later before the contest started to get scrappy.

With only a few minutes left, the Bombers kicked their third after more quick movement from their defence. Tessa Boyd then got a free kick right on the final siren, converting from 40 metres out to make it all square at quarter time.

It was a lean second quarter against the wind for us, with an early goal from Essendon giving them back the lead.

Our defence stood firm once more despite Essendon consistently getting it inside forward 50. However Frew managed to launch a bomb just inside the forward arc to give them a 13 point lead 12 minutes into the quarter.

From there it was a fairly even contest to end the quarter, with the Bombers missing a late chance but still holding a 14 point lead at the main break.

It was a similar story to start the second half in the first three minutes. But it was us who struck the first blow of the quarter, with Laing setting up Kayla Ripari for her first of the day, cutting the margin to seven points.

Four minutes later Tessa Boyd had her second set shot of the day after a free, converting from 20 metres out and getting the margin down to one point.

As we continued to keep the ball in our forward half and apply plenty of pressure, De Angelis was on the end of a beautiful Rebecca Neaves set up. She slotted it on a tight angle to give us the lead by one straight kick.

With four minutes remaining Oliva Flanagan kicked her second of the game, and our fourth of the third, to give us a handy 14 point lead heading into the biggest fourth quarter of our season.

The Hangar became a pressure cooker in the first few minutes of the final quarter. But as Essendon continued to press hard, our defence stood its ground once more.

12 minutes into the final term the Bombers managed to kick the first of the quarter, with Heil kicking her second of the game and making it a single digit ball game once more.

It became more congested after that, with stoppages all across the ground. However the Dons pressed hard once more and it paid off, scoring a goal to tie things up.

The tension out in Tullamarine was sky high as Essendon charged forward once more, and there was one more twist to the tale, with the Bombers getting a chance to take the win after the siren.

From just outside the 50 metre arc the Bombers missed everything as the match ended with the first draw of the 2022 VFLW season.