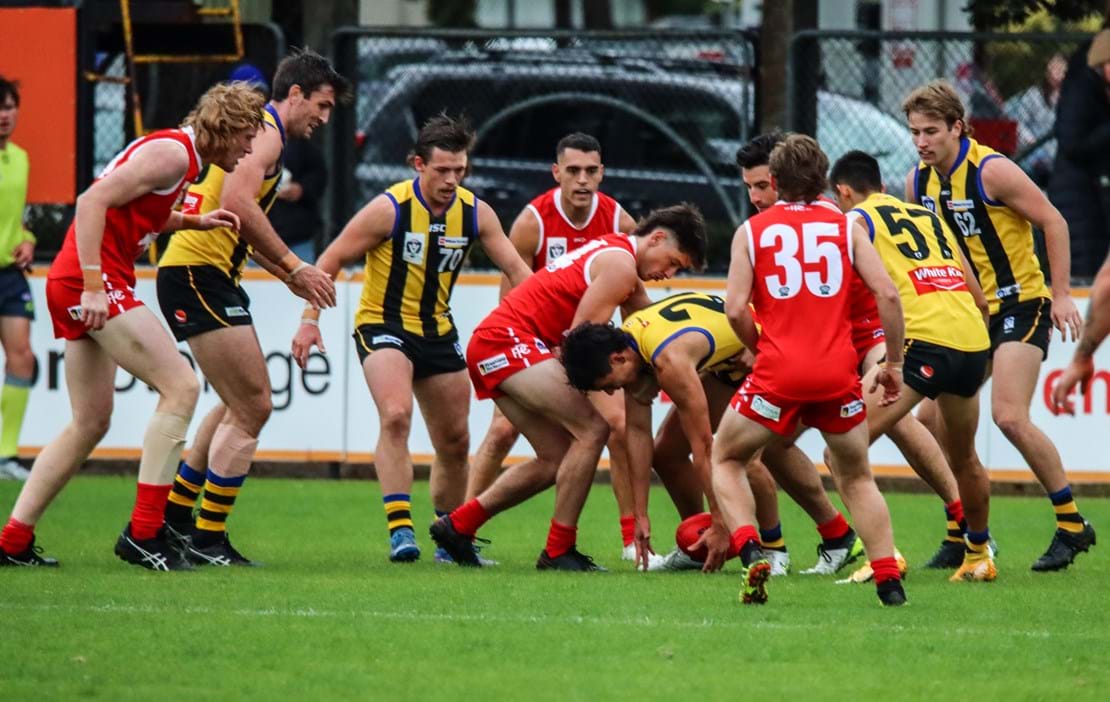 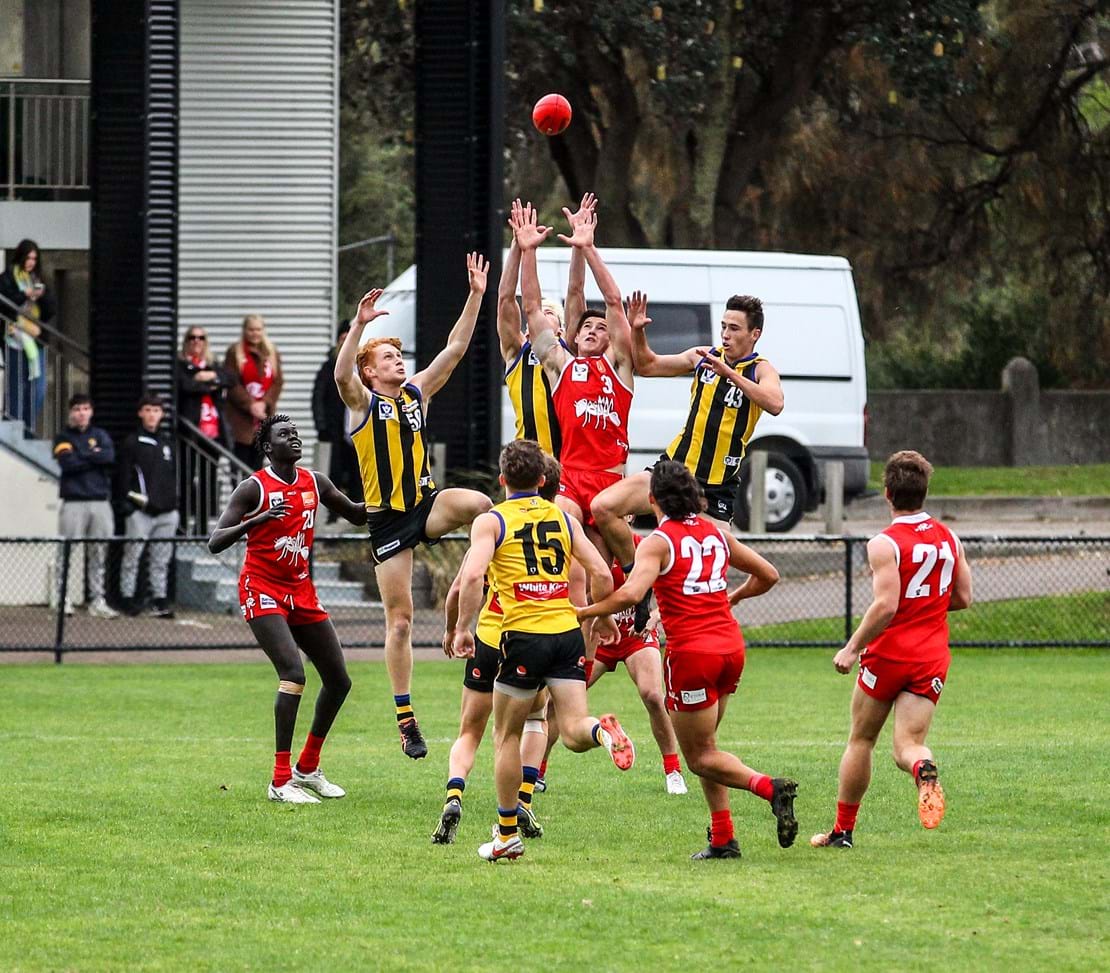 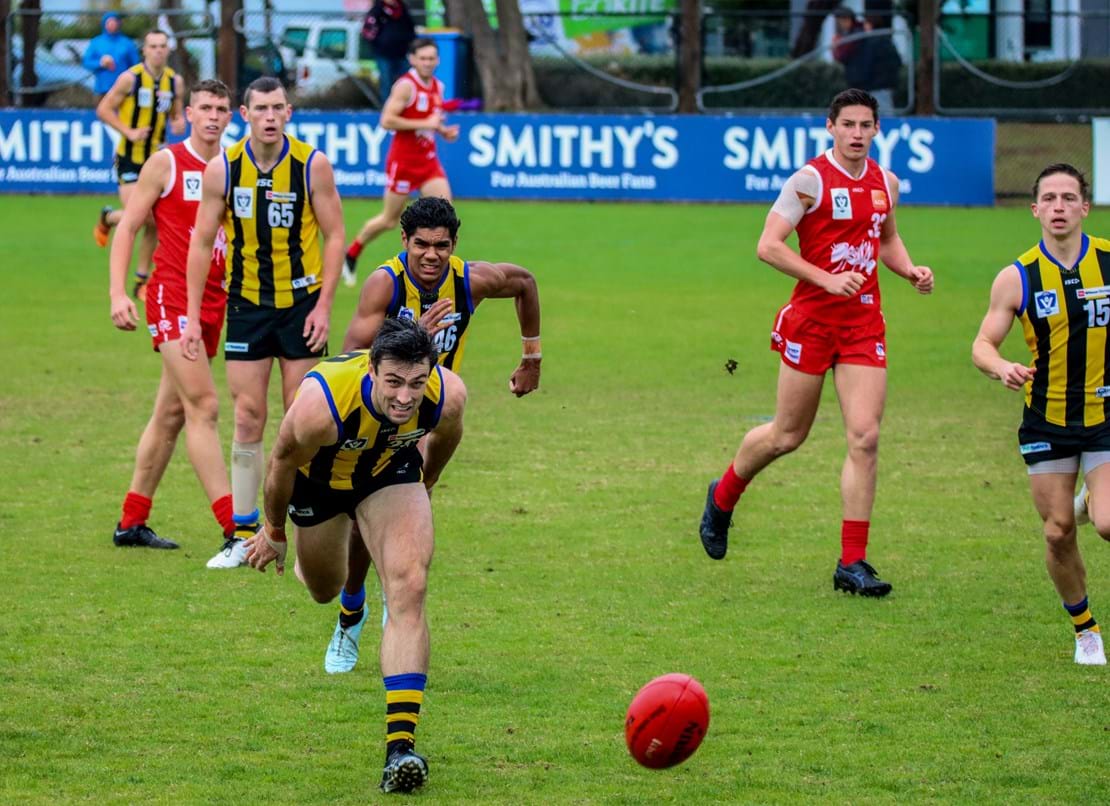 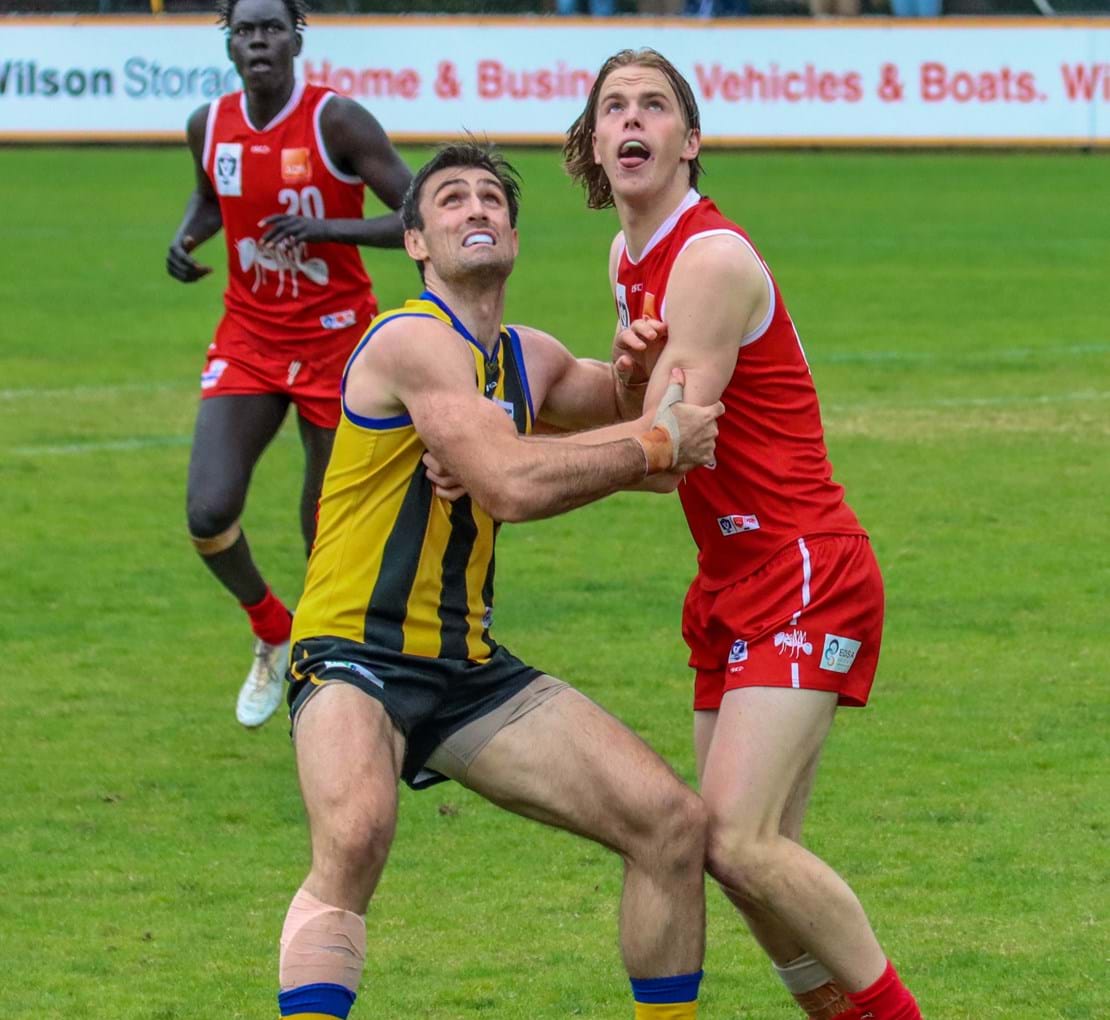 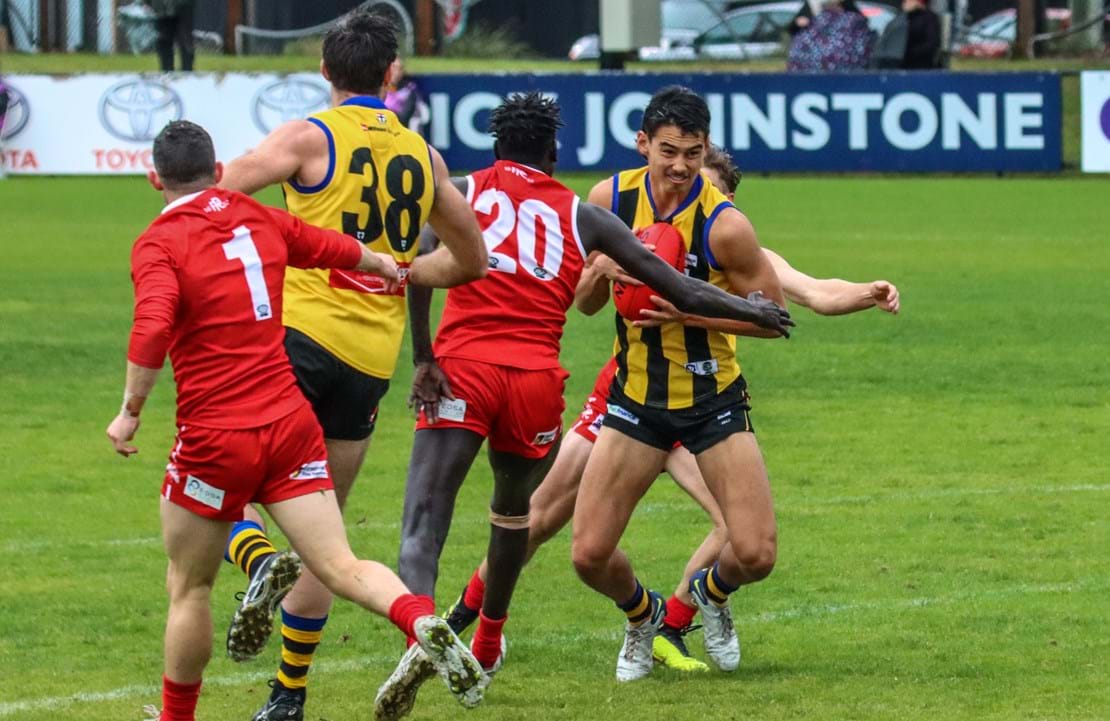 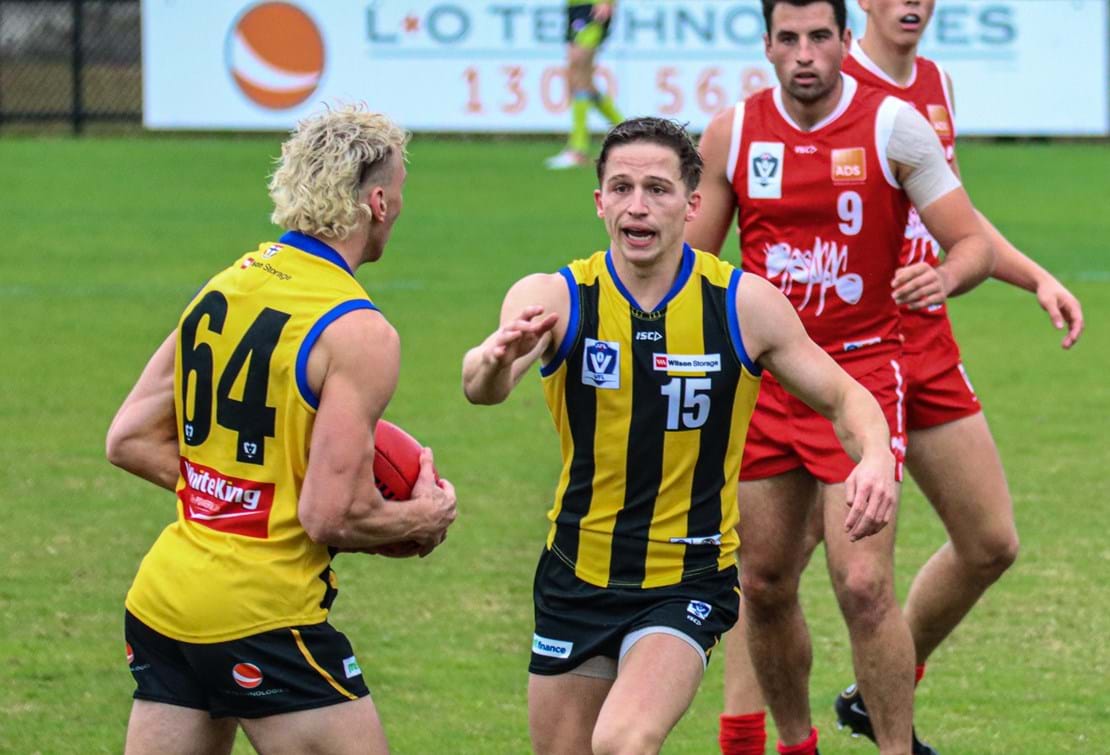 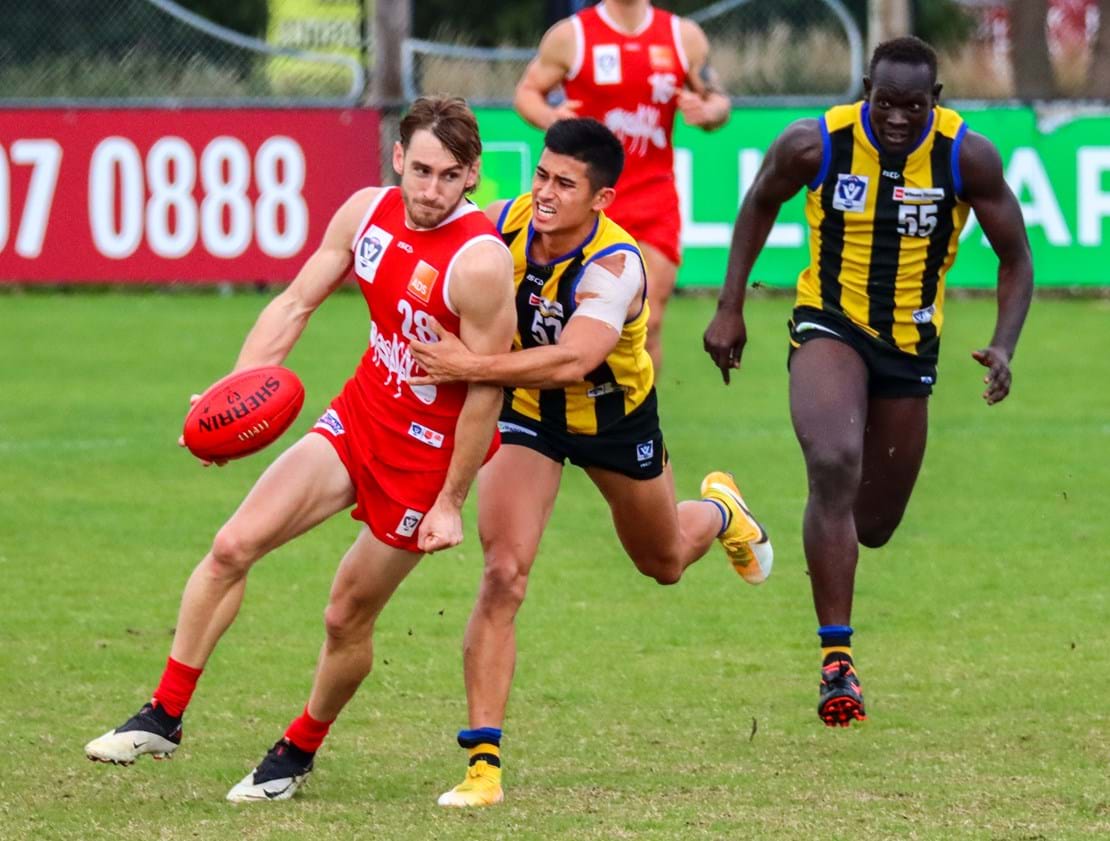 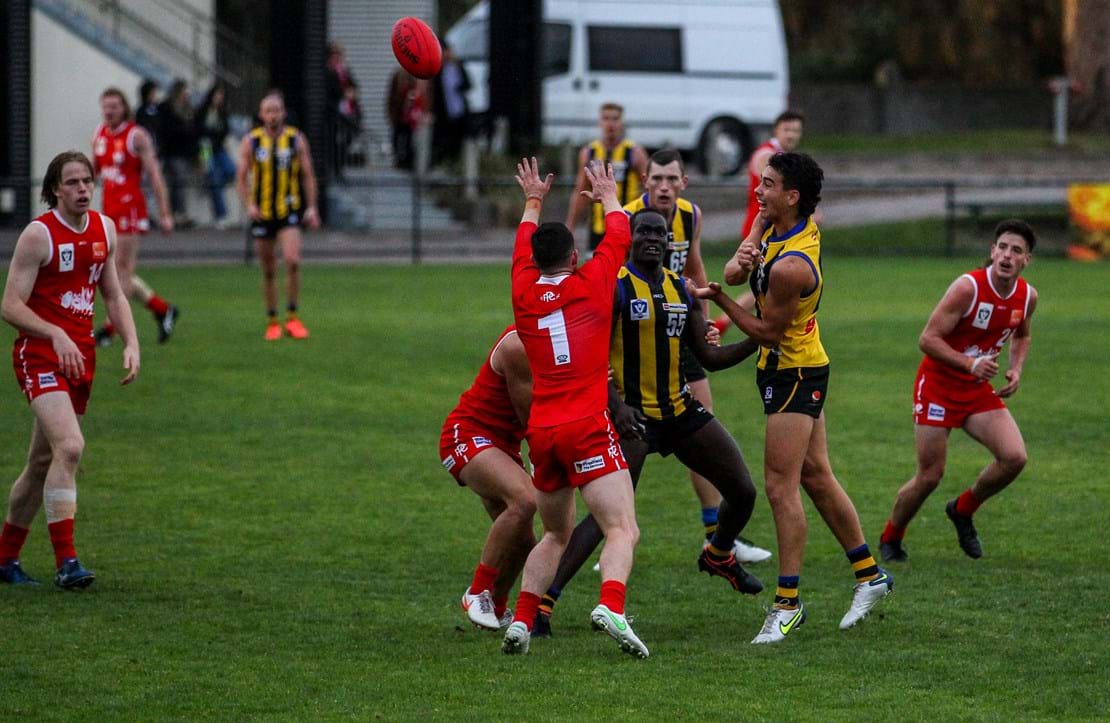 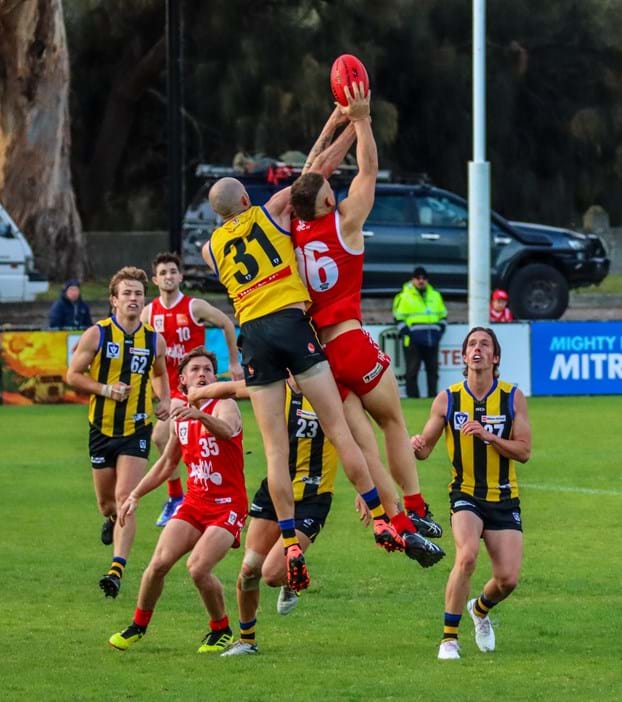 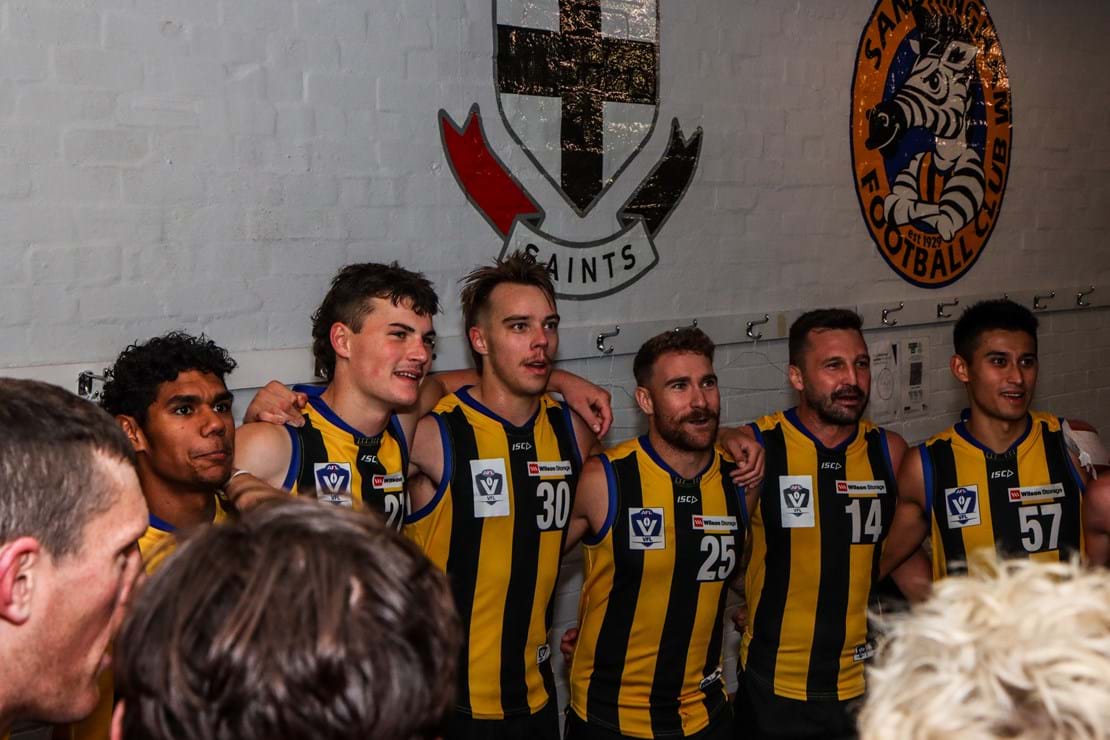 Coming into the match as strong favourites, a strong first half performance paved the way for our second consecutive victory and third win in four games.

Jake Lohmann followed up from his solid outing against Frankston with a livewire performance, kicking two goals and acquiring 14 disposals, two clearances and five marks.

Vice-Captain Goy Lok was also a strong presence up forward, particularly in the second half, and in the midfield, getting 14 disposals, three clearances and kicking two goals.

Some of the AFL-listed players also played key roles. Mitch Owens got the most disposals (32) and equal-most clearances (10) on the day, Tom Campbell had 22 disposals, 38 hitouts, eight clearances and a goal to his name whilst Jarrod Lienert, in his first Zebras game, collected 31 disposals, 22 kicks & eight marks.

On a cold, wintery day at home, it was a fairly even start to the contest at Wilson Storage Trevor Barker Beach Oval, with both teams getting scarce chances early on. But it was the Bullants who got the first goal of the match right before the seven minute mark.

It remained fairly even following that goal, however 11 minutes in we started to get the ball deep into our attacking half. Cooper Sharman kicked our first of the match to give us the lead.

The Bulants in turn responded, pressing forward, however our defence stood firm and conceded only a few behinds. As we briefly started to press ourselves, Oliver Lowe managed to kick our second consecutive goal 25 minutes into the first term.

Our next goal came only two and a half minutes later, with Lohmann converting an easy set shot. Campbell then took a strong mark inside 50 and converted his set shot as we ended the term leading by 17 points.

The ball went from end-to-end at the start of the second term before Dean Kent slotted a set shot from just inside the 50m arc for the first goal of the term.

We continued to press after that goal, with Lohmann taking another mark inside 50 eight minutes into the term. He converted the set shot to give us our sixth consecutive goal.

After an even next three minutes, Blake Watson roved a pack inside our forward 50 and snapped truly for our seventh goal. Right before the 15 minute mark Cooper Sharman then slotted a set shot as we rushed out to a 40-point advantage.

The Bullants came charging hard in time-on of the term. However our defence once more stood firm and conceded only four behinds as we took a six-goal advantage heading into the main break.

It was a similar story to start the third term, with our defence standing strong against a hard Bullants press, before they kicked the first of the term six minutes into it.

The contest became end to end after that goal. It wasn’t until the 23rd minute that the next goal of the match came via the Bullants to cut the margin to four goals.

Two minutes later we got the centre clearance, with Lok snapping truly on the run to get our first of the term. Mere moments after that Jack Billings launched one from outside 50 and it went through the big sticks to restore our half-time advantage.

The Bullants got the final goal of the quarter, plus a late behind, as we took a 29-point advantage heading into the final term.

After an early press from the Bullants to start the fourth we quickly moved it down the other end, with Kent kicking the first of the term. Immediately afterwards we kicked another, a snap from Lok extending the lead out to 40 points.

It was an even few minutes before the ball predominantly locked in our attacking half around the 10 minute mark. However the Bullants found an opportunity to get out on the run and kicked their first of the term 13 minutes into it.

They then got their second consecutive goal four minutes later before the contest became much more even for the majority of time-on.

At the 29 minute mark the siren sounded to signal a five goal victory for the Zebras as we now move into fifth spot on the ladder ahead of our bye this weekend.