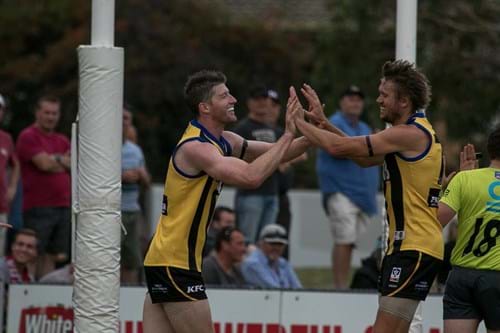 Williamstown kicked with a slight breeze in a scrappy opening stanza. The Gull’s struck first with their early dominance, as Rodda converted his 20 metre set shot.

Sandringham’s defenders soon found their rhythm and began to drive the ball from defence into attack.

Answerth kicked our first in the 19th minute, after a series of slick handpasses through the centre.

The Final minutes of the quarter saw scoring liven up. Sandy kicked two courtesy of O’ Toole and Fox, but the Gulls were able to kick two of their own, holding a 3-point lead at quarter time.

Our forward half pressure led to the first of the second quarter, as Dunstan marked and converted a sharp opportunity from the arc.

From there the game turned into a shootout. Wheeler and Ottavi kicking for Williamstown, whilst Marsh and Young kept Sandy in front.

The latter part of second saw a swing in the game’s momentum. Our pressure resulted in repeat entries, which proved too much for Williamstown’s defence.

Durras Seccull juggled a contested mark and converted a close range set shot for his first goal in VFL football.

Dunstan was able to add his second for the quarter, snapping a classic front and centre from 30 metres out.

Going into the main break we held a lead of 13 points, making the most of a breeze to the grandstand end.

Our clinical conversion and repeat forward 50 entries were the difference in the 2nd quarter, which negated Williamstown’s extra in defence.

The Gulls had the breeze in the third and were looking dangerous to open proceedings.

Some good intercept marking from White helped keep them at bay and from there we were able to rebound.

Gilbert got us underway in the 3rd converting an easy set shot after a 50 metre penalty.

We were disciplined defensively throughout the quarter with players dropping back. Longer helped the defenders and was key to quelling any Williamstown forward forays.

Our third came courtesy of a brilliant string of handballs through the centre with Young getting on the end for an easy goal.

The Gull’s answered back with a quick reply in the 22nd minute, their first since the 16th minute of the second quarter.

We went into the final break with a 24-point buffer and a chance to upset an undefeated Seagull’s side.

The fourth quarter saw a drop in the wind, but both sides missed early opportunities.

Williamstown scored the first major in the 4th minute finding a way over the back of our defence.

Clark was able to kick our first in the 16th minute, thanks to a Williamstown turnover in our forward 50.

The Gull’s refused to go-away, as Rodda asserted himself into the game kicking the next two goals.

By the 23rd minute the margin was just 12 points, with Sandy needing an answer to Williamstown’s late surge.

Durras Seccull was the answer, as he responded with his third courtesy of some Rice forward craft. But Seccull wasn’t done, taking a contested grab at the top of the square and kicking the sealer.

A number of strong performances were key to our first win of the season. Clark, White and Armitage all found plenty of the ball, whilst D. Seccull and Fox looked dangerous up forward.

We have the bye this week, giving the boys a deserved break. Next, we take on Frankston Dolphins on Sunday May 5 at 2:10pm, RSEA Park for M8 Finance Round 5.