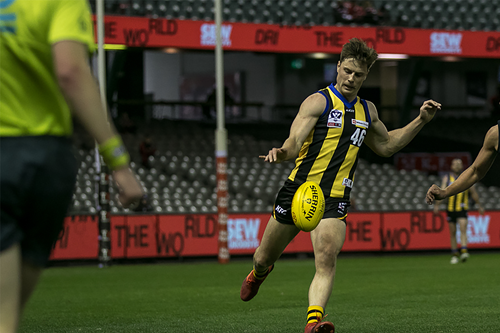 Sandringham come from behind to beat the Northern Blues, with six unanswered goals in the third securing our place in the top eight.

The Blues started the game well, applying plenty of forward pressure, which resulted in their first two goals to Lang and Lebois.

Our first came after Hind intercepted a misdirected kick, with Armitage finding himself on the end of a handball chain for an easy goal.

Despite our pressure and intensity lifting, the Blues continued to score, with Kerr and Owies both converting their chances.

Batchelor set up our response, sending a long ball into Rice who made no mistake, slotting his set shot from the top of the square.

The Blues were able to jag a goal back just before the break, with Kerr taking a strong mark and converting the set shot. This gave the blues an 18-point margin at the first break.

The Blues started the second quarter brightly, as Owies dribbled through a goal from a very tight angle. Sandy needed to respond and looked to attack the Blues through the corridor.

Answerth provided a much-needed spark, starting a nice chain of possessions in the middle, which he then got on the end of and ran into an open goal.

The Blues answered back immediately, with Keppel marking and converting his set shot from 10 metres out on a slight angle.

Despite some promising ball movement, Sandy was unable to score for the remainder of the quarter. However, we managed to slow the Blues scoring and went into the main break down by 16 points. Our forward 50 entries would need to improve if we were to mount a comeback in the second half.

After controlling possession at the start of the third quarter, we managed to convert our dominance on the scoreboard. Hind was the beneficiary of good forward pressure, snapping the first of the quarter from 30 out on a slight angle.

From here the floodgates opened, as we went on to kick six goals to none for the term. Great attacking play through the centre and quick ball movement gave us good opportunities. King, Haidon and Seccull all hit the scoreboard to put us in front for the first time.

Fox finished the quarter off strongly, kicking two in quick succession. His second was one for the highlight reel, fending off a defender and then kicking the banana from a few meters inside the boundary.

It was a dominant third quarter, as we controlled the tempo of the game. We had nullified the Blues’ rebounding by increasing our tackling pressure and cleaning up our forward fifty entries. We went into the final break with a 17 point lead and the momentum.

We continued to control the tempo of the game, as we deprived the Blues of meaningful possession. We extended our lead to 31 points with the help of Fox kicking his third, and King his second. However, the Blues weren’t willing to go down easy, snapping their goalless run with three goals in a row.

The lead was now just 11 points.  However, it was too late, as we held our nerve to register our fourth win of the year! A strong second half sealed the victory, with Seccull, Armitage, Fox and Clark being the notable performers.

Next Sunday we travel to Piranha Park, where we face Coburg for our Round 9 clash, kicking off at 12:30pm.