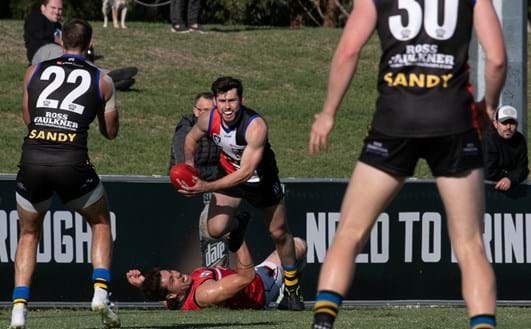 RSEA Park saw its first taste of VFL football on Sunday, as the Sandringham Zebras defeated the Frankston Dolphins by two points. The Zebras win followed a strong performance by the Southern Saints, who defeated Collingwood in their VFLW match earlier in the day.

Frankston opened the scoring against a strong breeze in the first quarter, before Durras Seccull kicked truly after taking a strong mark deep in the forward line.

St Kilda duo Dunstan and Armitage were prolific through the midfield, with 17 disposals, six tackles and a goal between them at quarter time while Bailey Rice was lively up forward, scoring a goal late in the quarter. Despite a ten possession first quarter from Frankston’s Aloysio Ferreira, the Zebra’s held a 16 point lead after a hard fought first term.

Kicking with the wind in the second term Frankston hit back with a five goals to zero, leading by ten points at half time. Billy Longer was dominant in the ruck, and although the Zebras had patches of good ball movement, they were unable to capitalise.

The Dolphins struck first after half time, but goals to Rowe, Gilbert and Rice saw the Zebras take the lead. Both sides pushed hard through the third quarter but is was Sandringham who made the most of their opportunities, taking a 17 point lead into the final quarter.

Kicking with the wind, Frankston had the majority of attacking play early in the fourth. Nathan Brown, Sam Gilbert and Jack Noone stood tall in defence, while Kade Answerth made his presence felt around the ball.

Frankston scored the first major of the term after more than twelve minutes of play and followed with another shortly after, bringing the Zebras lead to just three points. From that point onwards the Frankston forward line was locked down like a prison, and despite their best efforts the Dolphins were unable to score, leaving the crowd to collectively let out a sigh of relief as Sandringham finished two point winners.

The Zebras will be looking to win a third consecutive match next Sunday, when they take on Collingwood at Victoria Park.