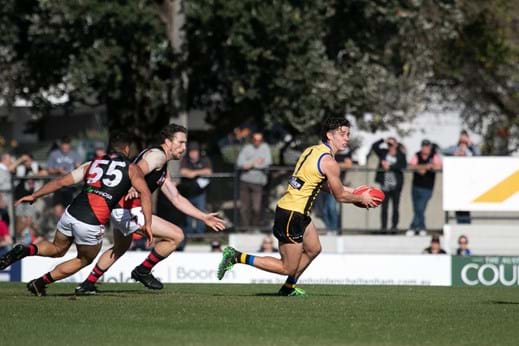 The Sandringham Zebra’s have gone down to Essendon by 13 points at Wilson Storage Trevor Barker Beach Oval.

Long range goals were the order of the day, with both teams making the most of a strong wind to the grandstand end.

Kicking with the wind, Essendon raced out of the blocks early with the first three goals, before Anthony Seaton put Sandringham on the board with his first goal for the club. Despite the Zebra’s efforts, the first quarter belonged to Essendon, who led by 33 points at the first break.

Max King hit the scoreboard early in the second quarter, kicking truly after taking an intercept mark just outside the 50 metre arc. Making the most of the wind, the Zebras kicked two more goals through Armitage and Rice bringing the margin back to 15 points.

The Zebras tackle pressure kept them in control throughout the second term, with the Bombers rarely moving the ball into their forward half. Darragh Joyce kicked his first VFL goal from outside 50, and the Bombers led by just one goal at half time.

Hunter Clark and Brandon White led the Zebras for first half disposals, while Billy Longer took the points over Zac Clark in the ruck. Neither team found a multiple goalkicker before half time.

Essendon kicked two goals early in the third, before Sandringham worked their way back into the contest. Despite kicking against the wind, the Zebras looked the better side through large patches of the third term and left themselves with a deficit of just 16 points coming into the last quarter.

Essendon came out firing in the fourth term and kicked the first three goals to take a lead of 32 points. A few missed chances and the wind dying down, did not help the Zebras chances of a comeback.

Max King kicked his fourth goal late in the game from another contested mark, before a scrappy Bailey Rice goal brought the margin back to 13 points. But it was too late, as the siren sounded shortly after Sandy were building momentum.

The Zebras now turn their attention to their Advanced Sawing & Drilling Round 8 clash with the Northern Blues. Sandringham return to Marvel Stadium on Sunday the 26th, kicking off at 11:50am before the Saints play Carlton in a double header.