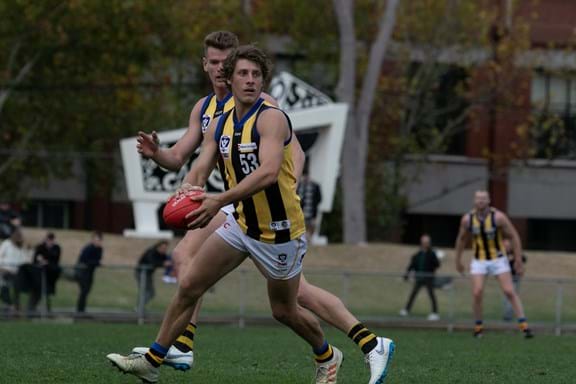 The Sandringham Zebras have defeated Collingwood in a Mothers Day thriller, with Sandringham coming out one point winners in the low scoring affair at Victoria Park. Billy Longer was dominant in the ruck, Brede Seccull worked hard through the midfield and top St Kilda draft pick Max King was the talk of the stands in his first VFL game.

The first quarter resembled a ping pong match, with the ball travelling back and forth to each end of the ground, with neither team able to capitalise. Sam Rowe scored the games first major from a strong mark inside 50 after nearly 15 minutes. Kade Answerth was busy early with 8 early touches, while St Kilda young gun Max King scored his first ever VFL goal with an opportunistic soccer off the ground to ensure Sandringham led at quarter time.

The game tightened up in the second quarter, with both teams playing tough football around the contest. Nathan Wright broke the gridlock after ten minutes to score the first goal of the term, before Robbie Young’s goal from a boundary line set shot increased the lead further. St. Kilda duo Hunter Clark and Brandon White led Sandringham’s disposals at the half with 15 each, as the Zebras took a 7 point lead into the main break.

The low scoring football continued in the third with both teams contesting fiercely in the midfield. Sam Gilbert’s crumbing goal made it hard to believe he’d played 200 games in defence, and Sam Rowe’s impressive run up forward continued as he kicked his second goal of the day from a sharp angle. Despite Collingwood’s pressure around the ball, the Zebra’s pushed hard to lead by 13 points at the final break.

Collingwood came out strong in the final quarter, moving the ball well they kicked four unanswered goals to take the lead. In the final ten minutes of the game, Sandringham fought back, keeping the ball locked in their forward half for most of the remainder of the quarter but were unable to capitalise with a goal. After a string of five behinds, the Zebra’s launched their final attack with the scores level. Billy Longer took a strong contested mark in the centre of the ground before kicking high into the 50 where Sam Fox made the most of the opportunity and marked. Fox missed the goal, but the behind was enough to put Sandringham in front. The siren blew just moments later, securing the four points and the clubs third win in a row.

Sandringham debutants Ryan Carroll (Sandringham Community Combine) and Anthony Seaton (Sandringham Dragons) both had attempts to hit the scoreboard in their first VFL games but unfortunately were only minor scores.

Sandringham now sit outside the top eight on percentage alone, and will face 2nd place Essendon next week at home!