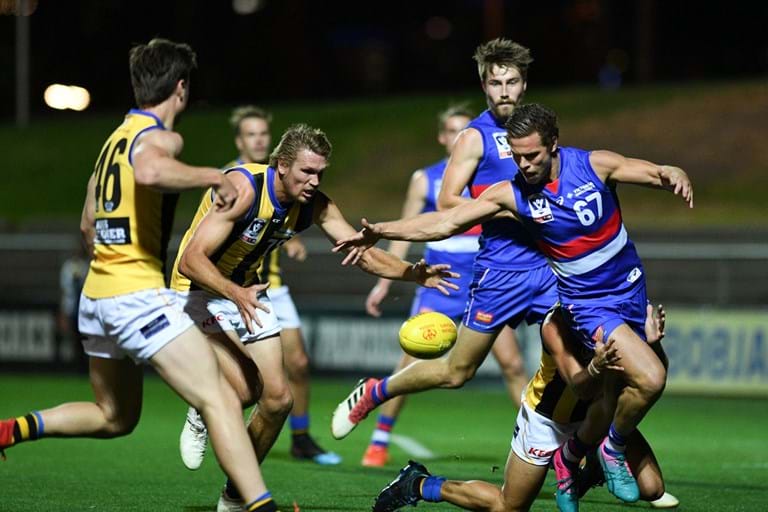 The Sandringham Zebras have gone down to the Footscray Bulldogs in their round one clash at the VU Whitten Oval. The Zebras fought hard and had periods of momentum during the loss but were unable to keep up with the Dogs.

Footscray scored the opening goal through Bailey Williams, with the Zebras scoring their first major shortly after through a Ben Long set shot.

Kicking with a sizable breeze Footscray pressed their advantage late in the term to lead by 15 at the first change, before Sam Fox gave the Zebras an early boost in the second quarter, kicking his second goal from a tough set shot.

Both sides had opportunities in the second quarter, but it was the home side who converted, scoring the next three goals, before Ed Phillips slotted his first major of the night.

The Zebras trailed by 21 points at the main break. Saint David Armitage wracked up the stats with 16 disposals at half time.

Footscray wasted opportunities in the early stages of the third quarter before taking advantage of the wind to lead by 41 at the final change.

The Zebras finished strongly in the fourth, kicking four goals, but were unable to chase down the deficit.

Gardener was impressive for Footscray with four goals, while Lipinski (26), Webb (24) and Hayes (24) lead the Dogs for disposals.

The Zebras attention now turns to their KPA Lawyers round two match against Box Hill at Marvel Stadium. The match will kick off at 11.40, and will be followed by Saints AFL side as they take on Hawthorn.