Lonie with a handful as the Zebras dominate Essendon

The Sandringham Zebras got back on the winners list in a dominant display, as they took down Essendon by 67-points in front of a rambunctious home crowd at Wilson Storage Trevor Barker Beach Oval on Sunday. 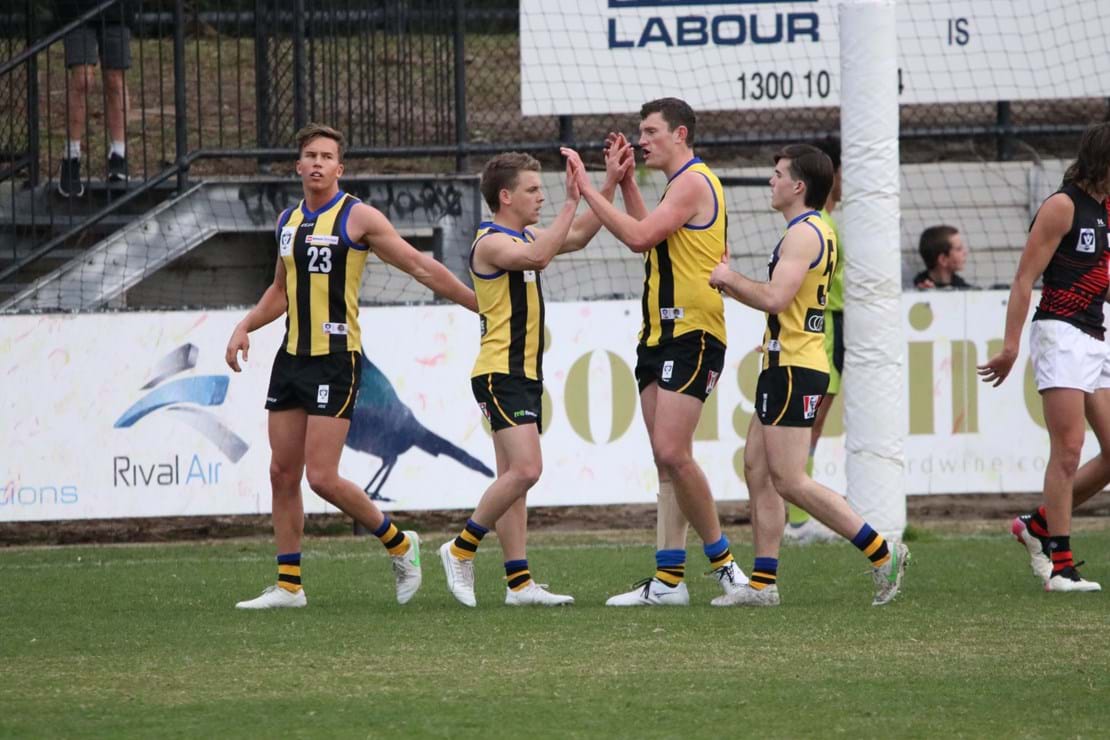 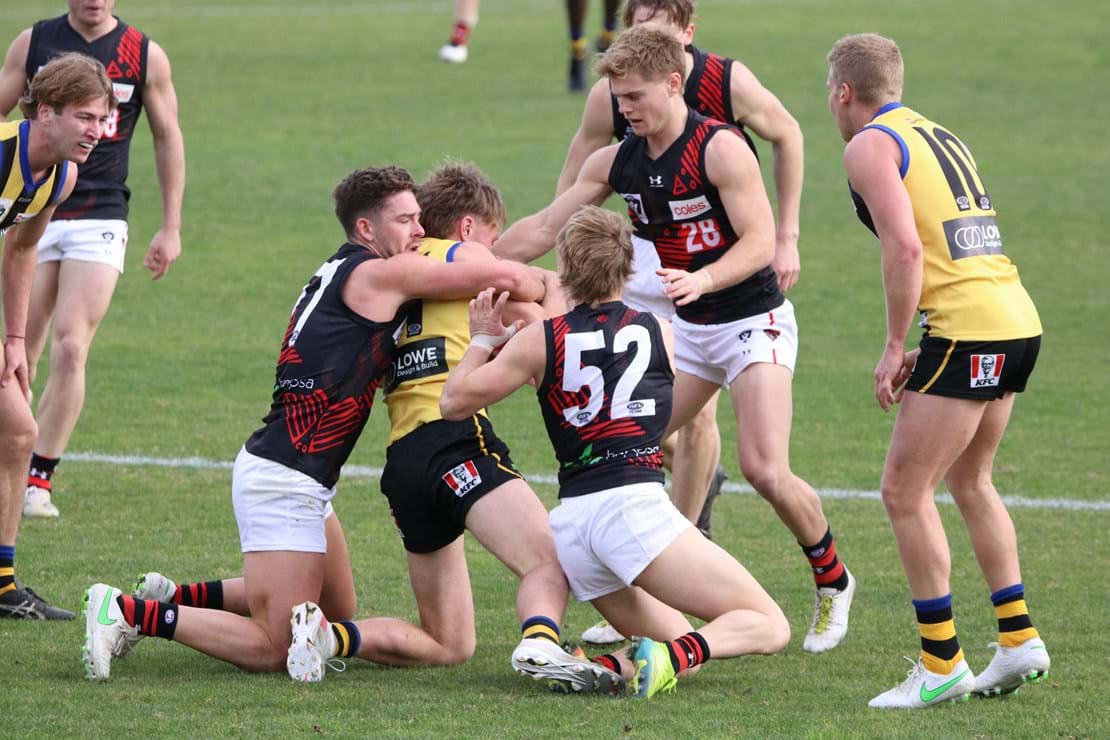 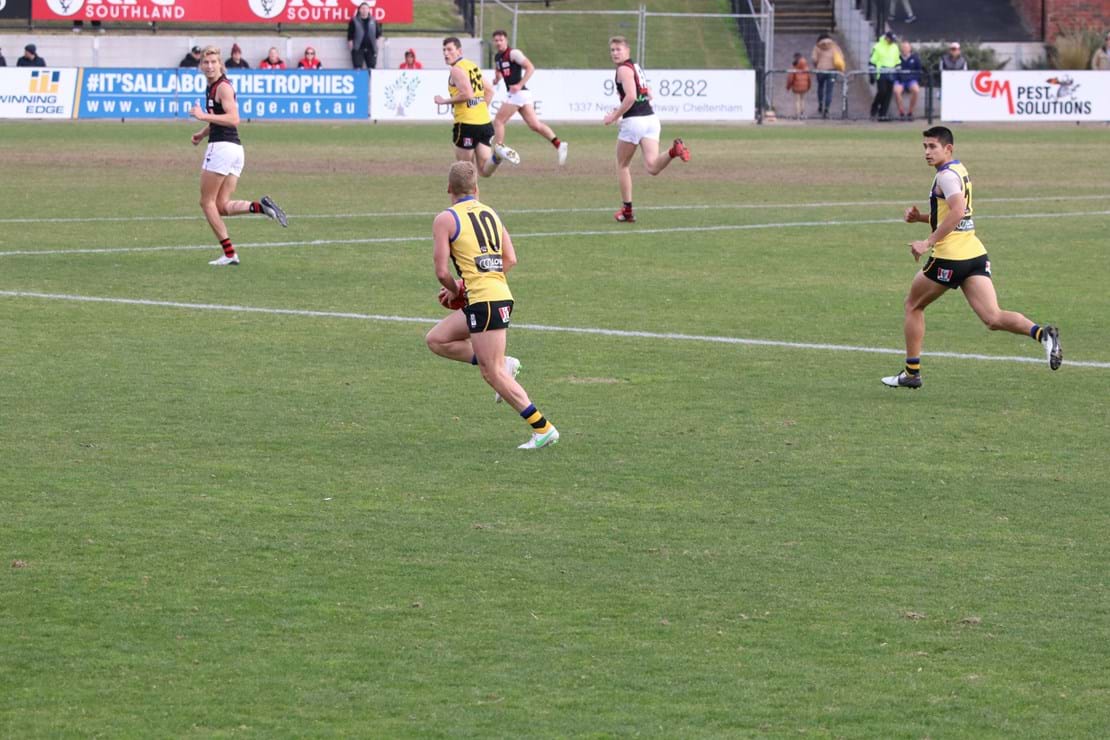 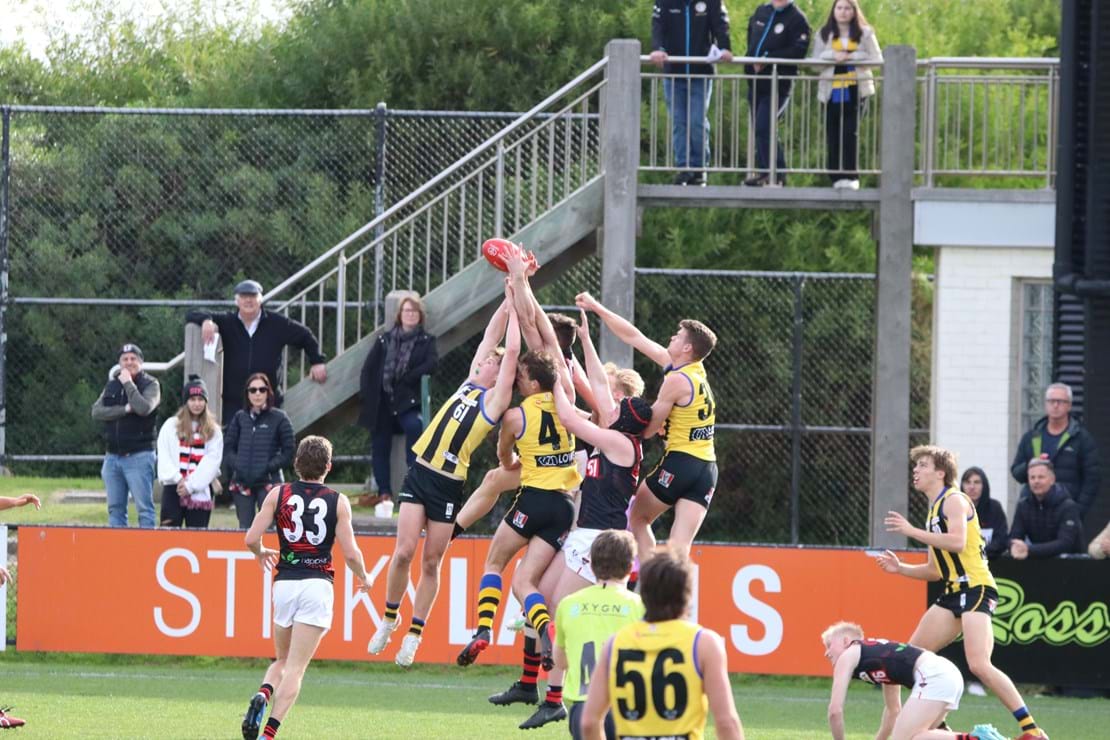 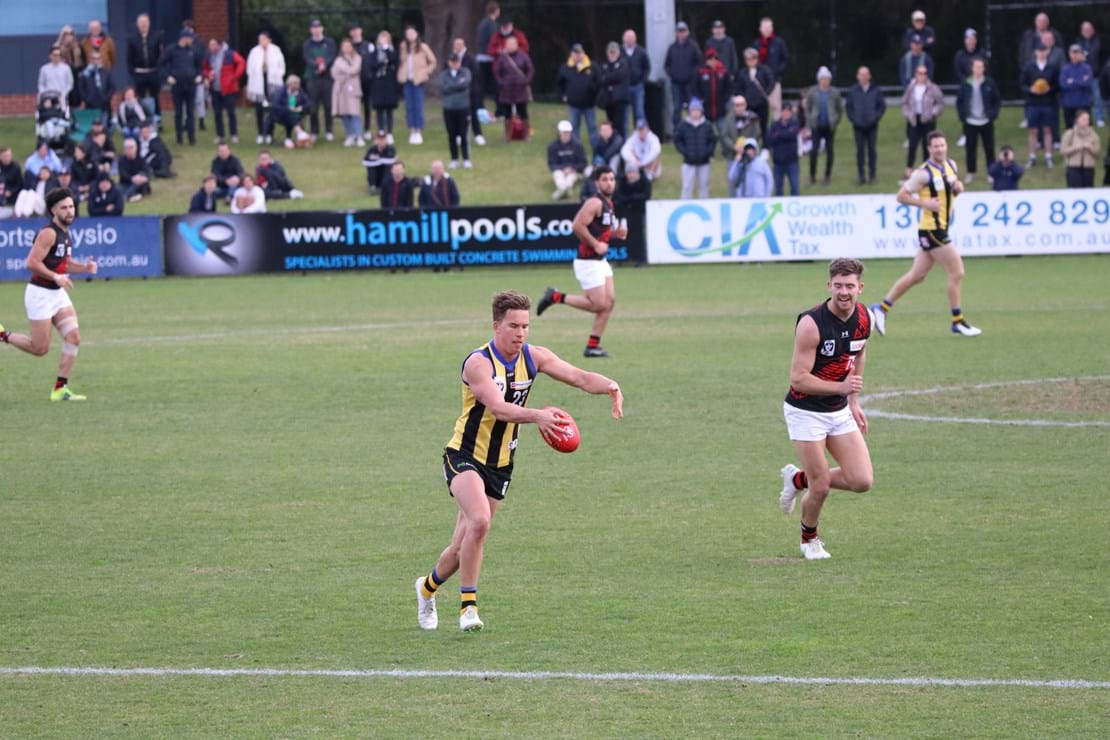 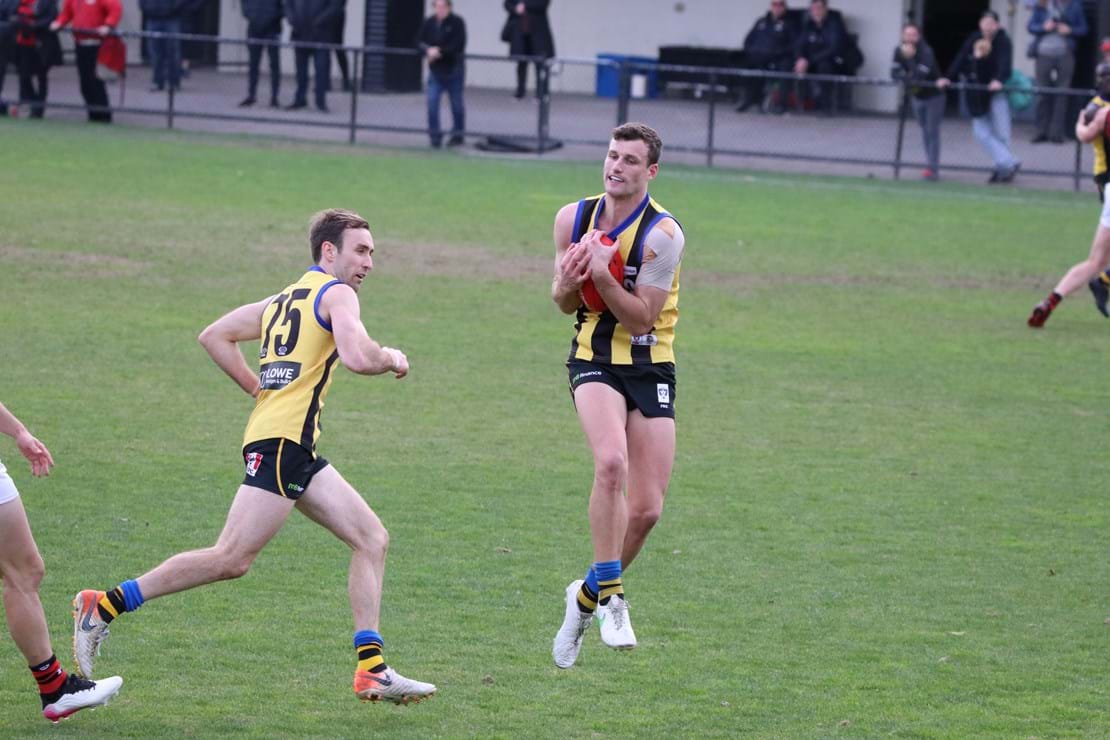 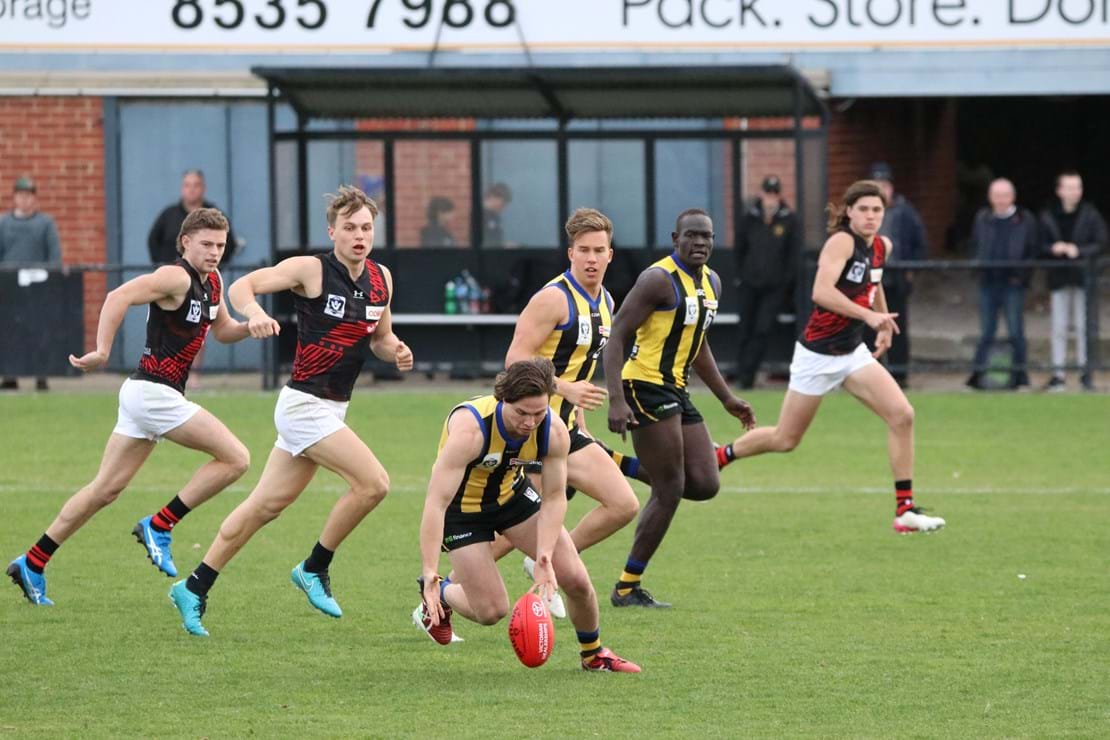 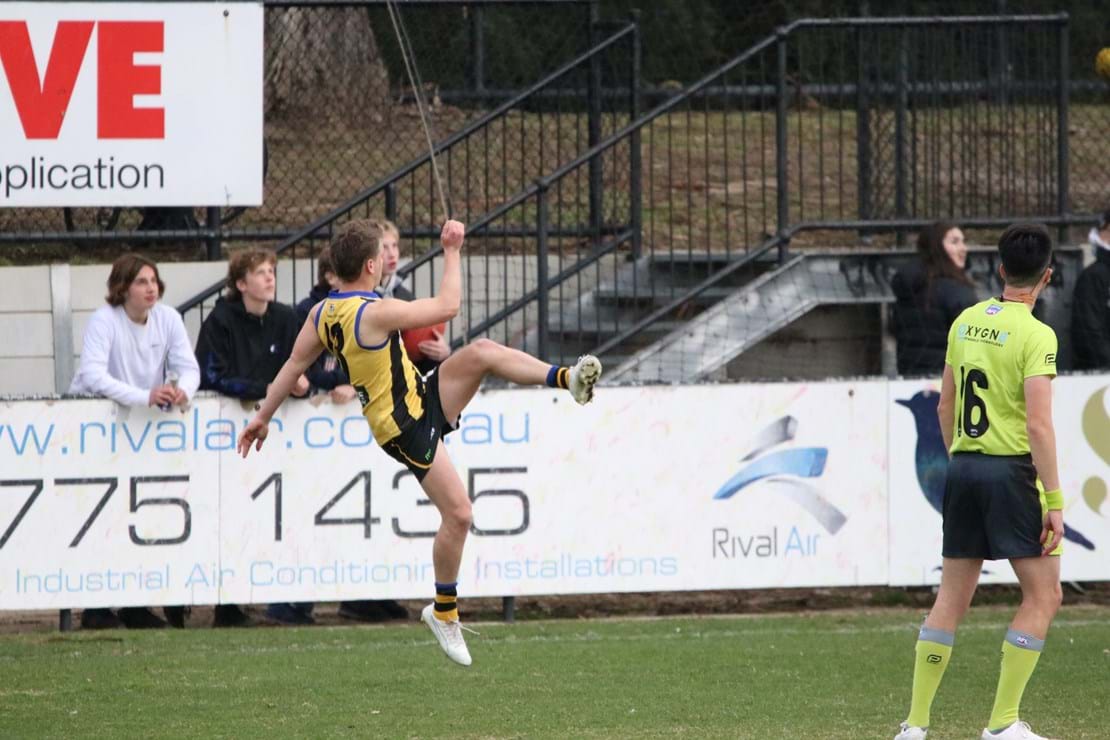 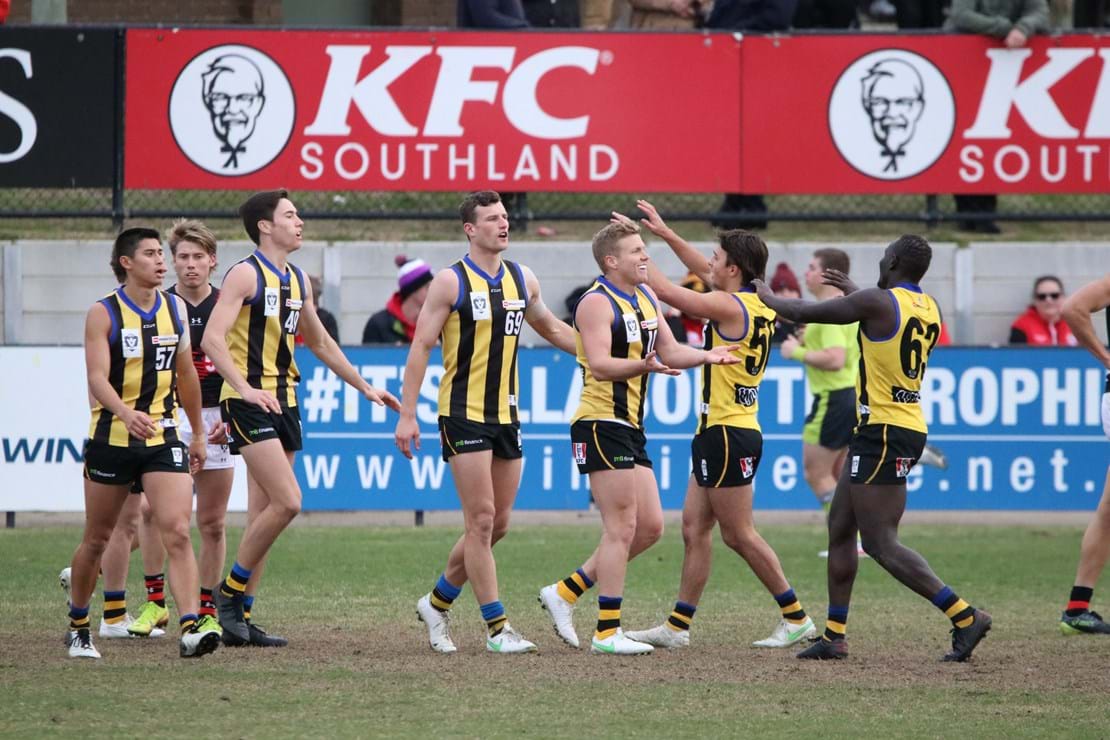 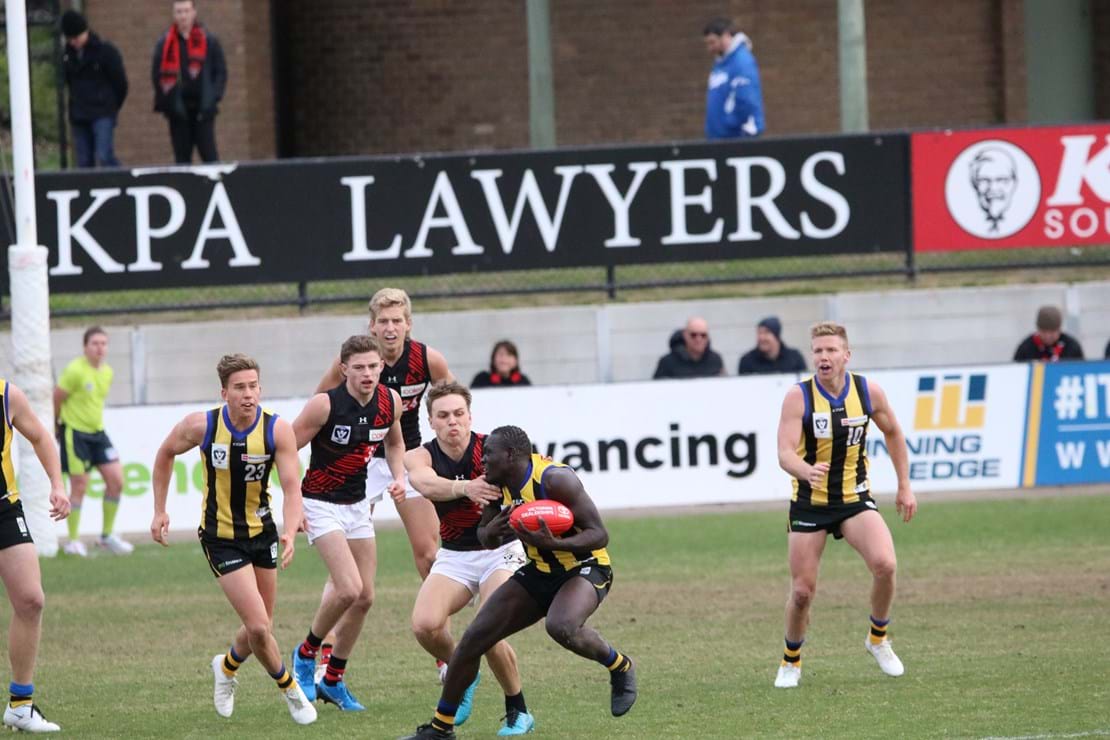 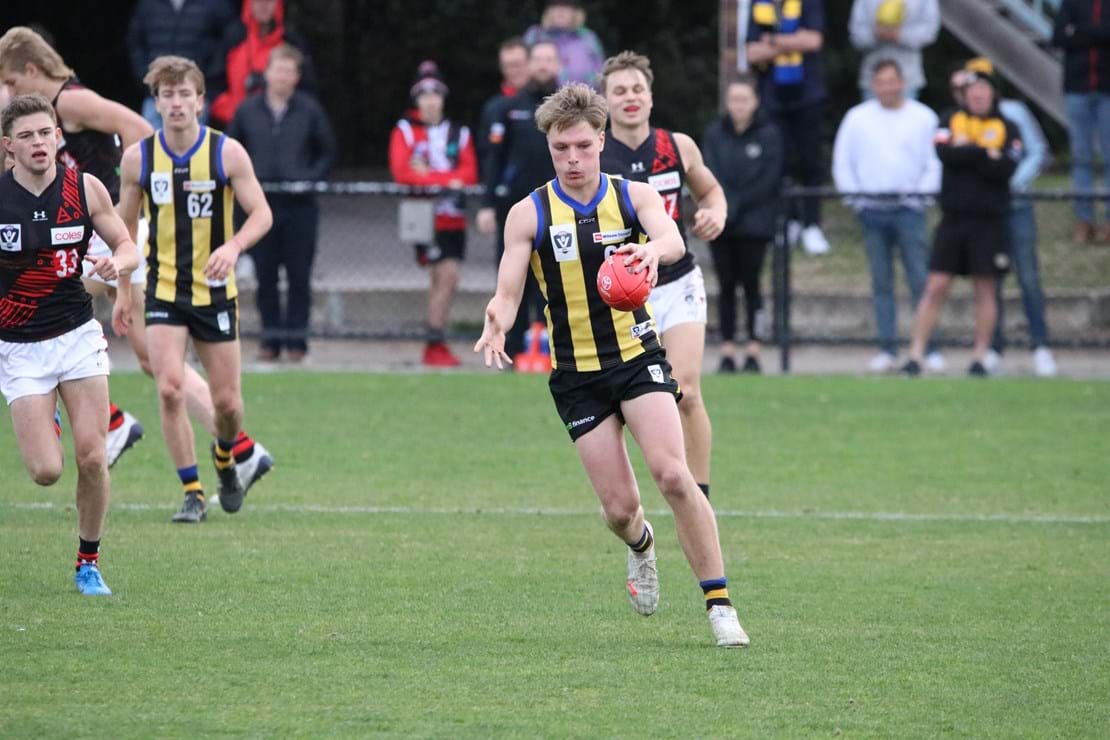 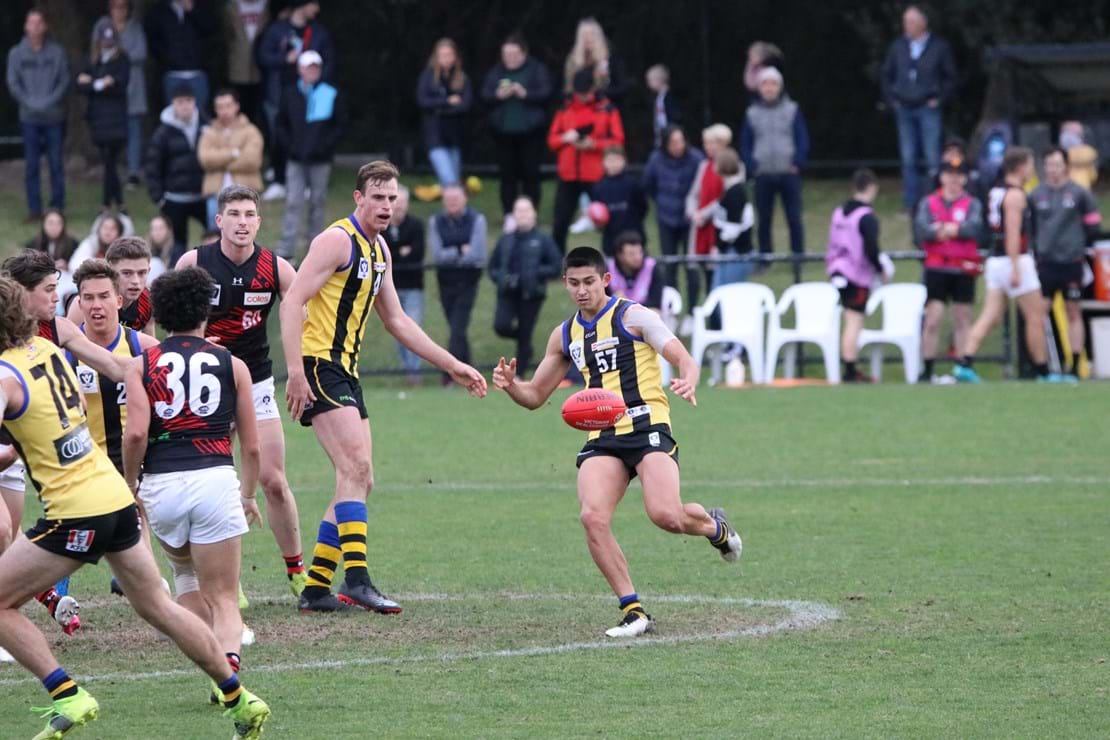 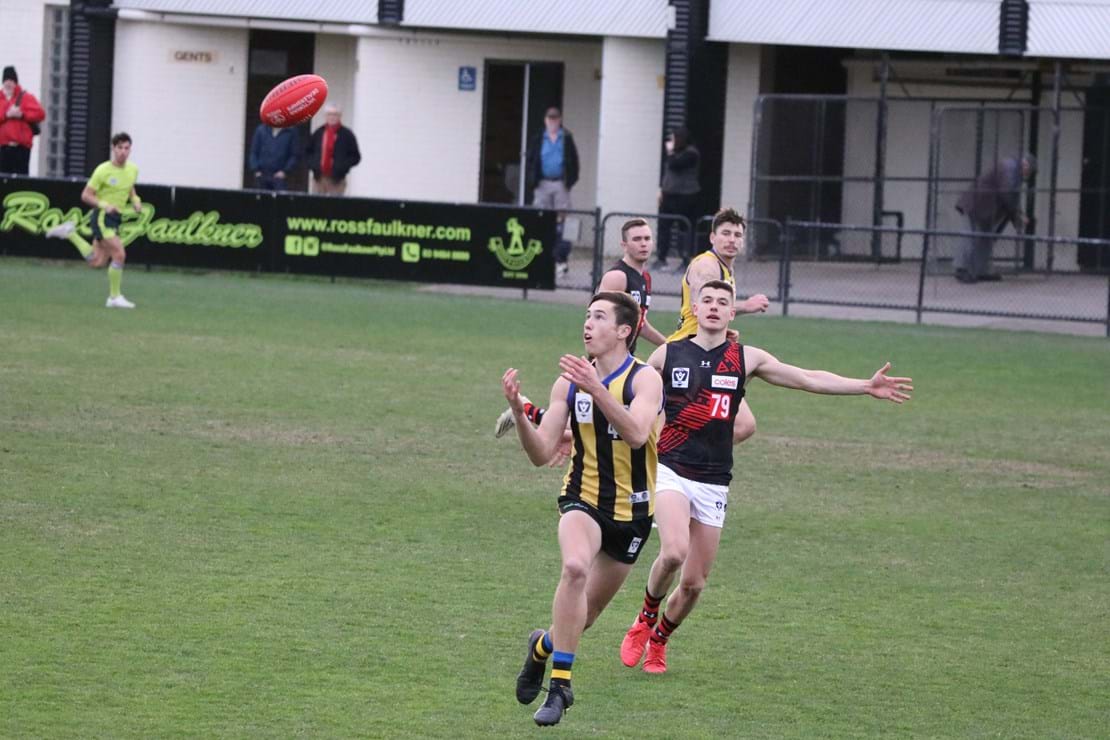 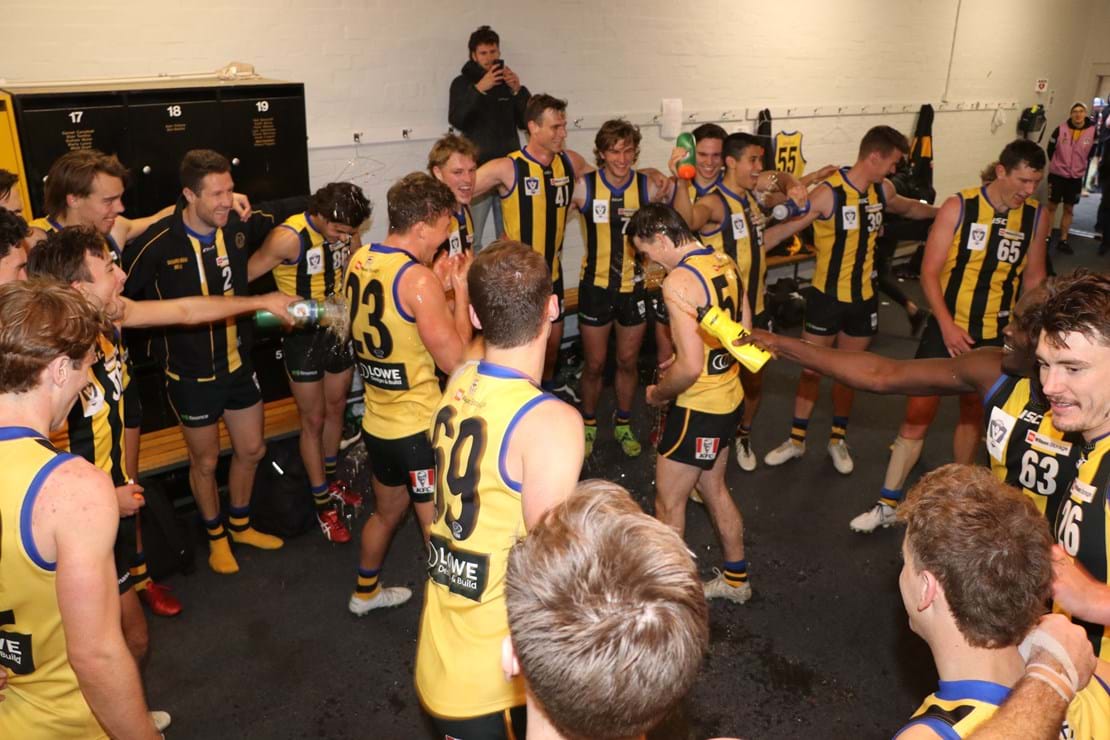 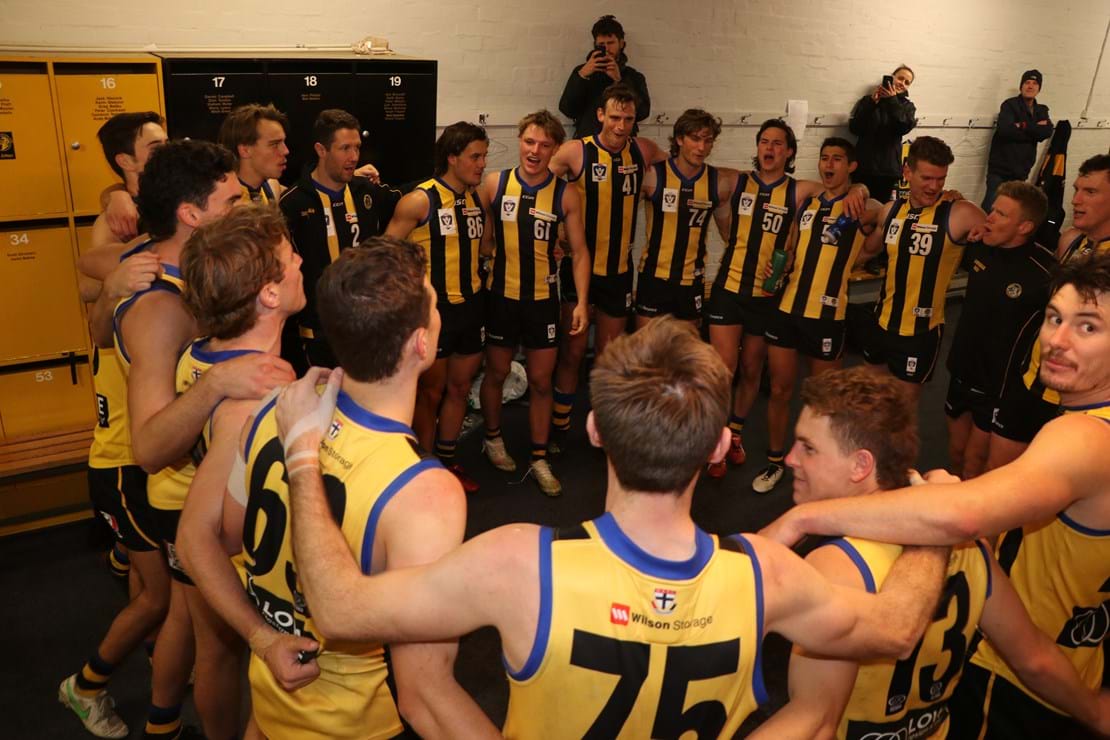 A blustery winter’s day greeted the sides down by the bay in an important contest for both teams.

Both teams struggled to gain ascendancy in the first few minutes, as conditions played their part, with players struggling to keep their feet and control the ball in windy conditions.

Sam Mclarty broke the deadlock for Essendon, as he perfectly negotiated the tough headwind to slot home a set shot after a free kick on the arc.

Josh Battle started well early working hard across the half-forward line, as he displayed some good foot skills in the swirly breeze.

Aided by the significant breeze, Darby Hipwell was able to open the Zebras account with a beautiful set shot from distance.

In his first game back after a long layoff, Dan Hannebery showed some nice touch around the stoppages in an otherwise scrappy contest early on.

It didn’t take long for Jack Lonie to show his class, as he found some space inside 50 and turned onto his left for a clinical snap to give the Zebs their second.

The Zebras started to take control of the game, and their forward pressure led to another goal as Fin Bayne turned on a dime to finish from 30m out.

The ball was humming out of the middle for the Zebs with Jack Bytel finding Chris Carey who sent home a 50m bomb to give the Zebs a handy lead.

Tom Hird got one back for Essendon, but the Zebs were taking full advantage of the breeze as Bytel burst out of the middle to give them their fifth of the quarter.

A disastrous kick in by the Dons gifted Cooper Sharman a goal late in the quarter, and the Zebras took a substantial 26-point lead into quarter time.

Now working against the breeze, the Zebras continued on from where they left off in the first quarter as Goy Lok was able to join the scorers list.

Essendon were able to hit back with a classic small forward goal to Bruno Laguda who was able to get front and centre and finish a snap to cut into the Sandringham lead.

Clavarino continued his exceptional season, as he positioned himself well for multiple intercept marks and defensive spoils.

With another set shot, Carey had soon slotted home his second, as the Zebras maintained their lead.

Essendon again hit back as Brayden Ham showed his skill to tighten the contest, and the intensity began to lift as Essendon could sense some life.

With five minutes to play in the quarter, Lonie was somehow able to find himself in a paddock of space and got on the end of a kick forward to finish his second goal and increase the Zebras lead.

The defense remained resolute in the dying stages of the first half despite some sustained pressure from Essendon, and the Zebs were able to take a well-earned 21-point lead into the main break.

The third quarter started with the Zebras on the backfoot early, and they were forced to defend, as Essendon came out looking to improve on their first half.

However, the Zebras got the first of the quarter, as an intelligent fist forward from Sharman ended up with Hannebery who slotted through a confident goal on the run.

Cody Henness was providing a great contest up forward, as he consistently brought the ball to ground where the small forwards could go to work, and he was eventually rewarded for his efforts with a goal of his own.

The midfield were in sync, as Hunter was providing the likes of Hannebery and Lok with repeat centre clearance opportunities.

Another Essendon turnover deep in defense allowed Lonie to finish a brilliant check side goal for his third of the game, as the Zebras were now well on top and looking to put Essendon out of the contest.

Everything was going the Zebs way, as a fortuitous kick forward by Bayne landed in the lap of Sam Dunell to push the lead up above seven goals halfway through the term.

Lonie was a class above the competition as he displayed supreme skills to set up Dunell for his second of the quarter, but again it was Hird for Essendon who was able to pin one back with a clever snap.

The Zebras were well on top and took a convincing 8-goal lead into the final change.

The Zebras came out with a ruthless attitude in the fourth quarter as they had the opportunity to tack on some important percentage.

Sharman was on fire and he added two goals in quick succession to take his tally to three and extend the Zebras margin beyond 10-goals.

The Zebras were showing no mercy, and Darby Hipwell soon had his second as he finished a set shot from directly in front.

Ham was a shining light for Essendon on a tough day, and he slotted through a quality goal from distance which highlighted his skills.

Another Jack Lonie goal gave him five for the day, as he knocks down the door for selection in the senior side once more.

Bayne put the finishing touches on the contest, as he put through a final set shot for the Zebs who were able to run out dominant 67-point victors in front of a large home crowd.

Debutant for the Zebras, Josh Gasparini said it was a pleasing performance.

"(It was good) to build some percentage and hopefully gain some momentum going into the next game."

"Last week we let Collingwood run over us a little bit, so this week was about getting that confidence back," he said.

"We didn't speak directly about percentage, but we knew that this was a chance to put the foot on the throttle and put a team to the sword."

"We've got a another challenge against a really good team in good form coming up in Frankston, so we can only focus on that and do what we gotta do."

The Zebras continue to rise up the ladder and now sit 11th with their next game to be played against Frankston with the fixture to be confirmed during the week.