Hard day at home for the Zebras 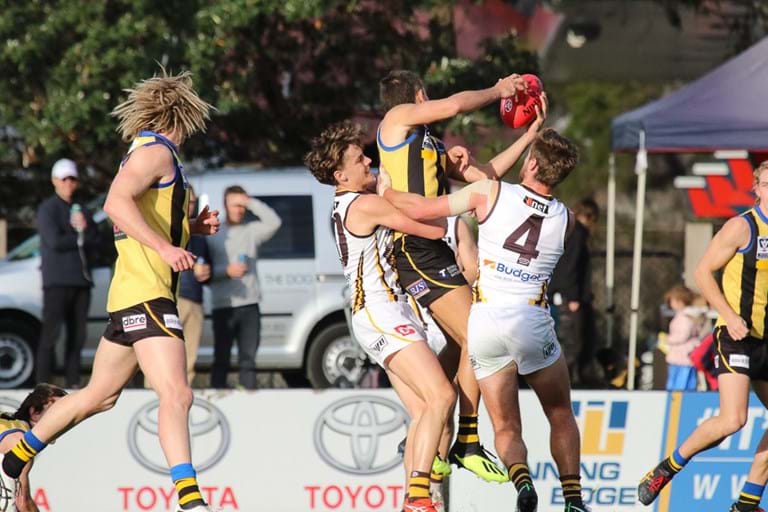 The Zebras last home game for the season didn’t go our way against Box Hill this week, as Sandringham were unable to move the ball into our forward half enough to make any dent in the lead that the Hawks continued to build on.

Box Hill scored early, which set a clear tone for the rest of the quarter as we were unable to find the goals, until Kai Owens finally broke the drought near the end of the quarter. This closed the gap going into the first break, to trail by 23 points.

Early in the second, Owens scored his second – and the Zebras’ – in a moment of brilliance from a set shot on the goal line. A third goal came from Nathan Freeman to get the Zebras a win in the second quarter to trail by just 19 points at half time.

Sandringham continued to fight, as Jono Haidon came out and scored the first goal of the second half. But Box Hill were quick to shut down any momentum that we had a chance of gaining, as they scored the next one to leave us trailing by 20 points at the final break. The Zebras were working hard, but missed the experience of St Kilda ruckman Billy Longer, losing the total hit-out count 69 to just 15.

Kicking with the wind, interim ruckman Hayden McLean found the goals early in the final quarter, before the Hawks kicked three consecutive goals to really put an end to any fighting chance we had left.

Despite almost getting within two goals of the Hawks, the Zebras were forced to cop a 31-point deficit at the final siren.

Nathan Freeman had an absolute day out, with a match high 37 touches, and a goal just to top off what was a best-on performance in a losing side. He ran hard all day to work for 33 uncontested possessions.

The Sandy Dragons’ Kai Owens was impressive up forward, kicking the Zebras’ first two goals for the day despite getting just 11 touches. He made the most of his opportunities and managed to be the only multiple goal-scorer for us on the day. Down back, Jack Noone was imposing taking ten marks as he had a strong defensive presence as the pressure was out on him all day.

Hayden McLean was given one of the toughest tasks for the day, taking on Hawthorn’s Marc Pittonet in the ruck contests. While he only had the 13 hit outs for the day, he proved his ability to take on any role and do it with confidence. With help in the middle from Brede Seccull who laid 13 tackles and had 12 contested possessions, the Zebras had their work cut out for them against an in-form Box Hill midfield.

The Zebras have a bye this week, before they look to their final three matches on the road.