The Southern Saints were unable to continue their winning streak on Saturday morning going down to a fast finishing Geelong by 11-points at Wilson Storage Trevor Barker Beach Oval. 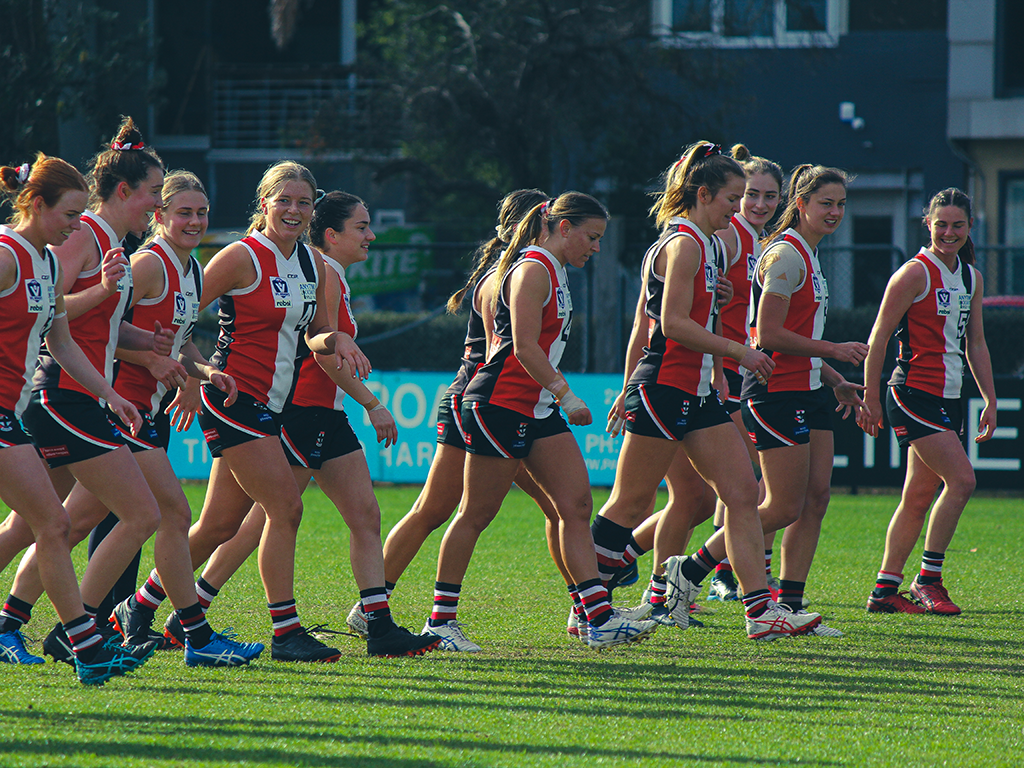 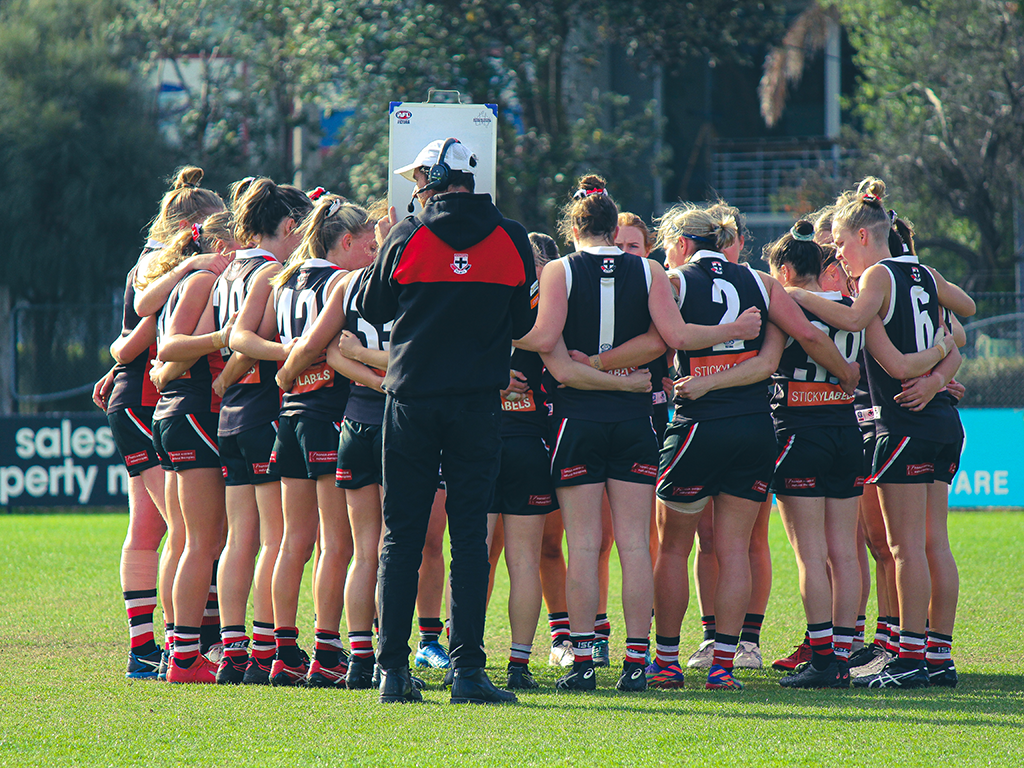 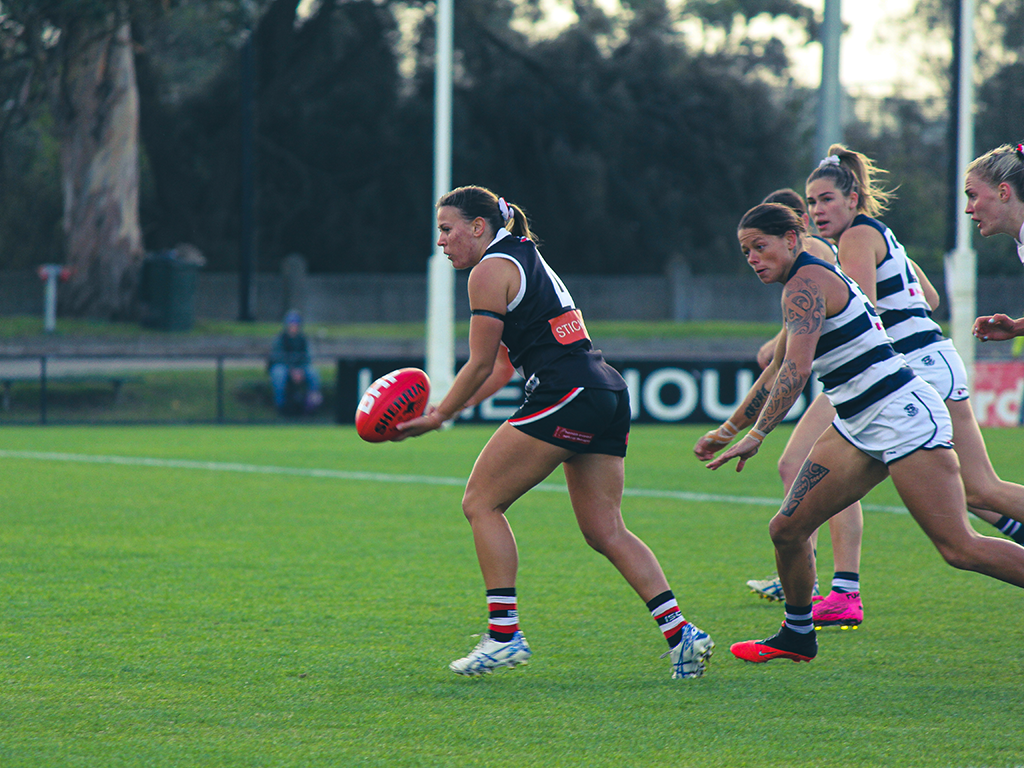 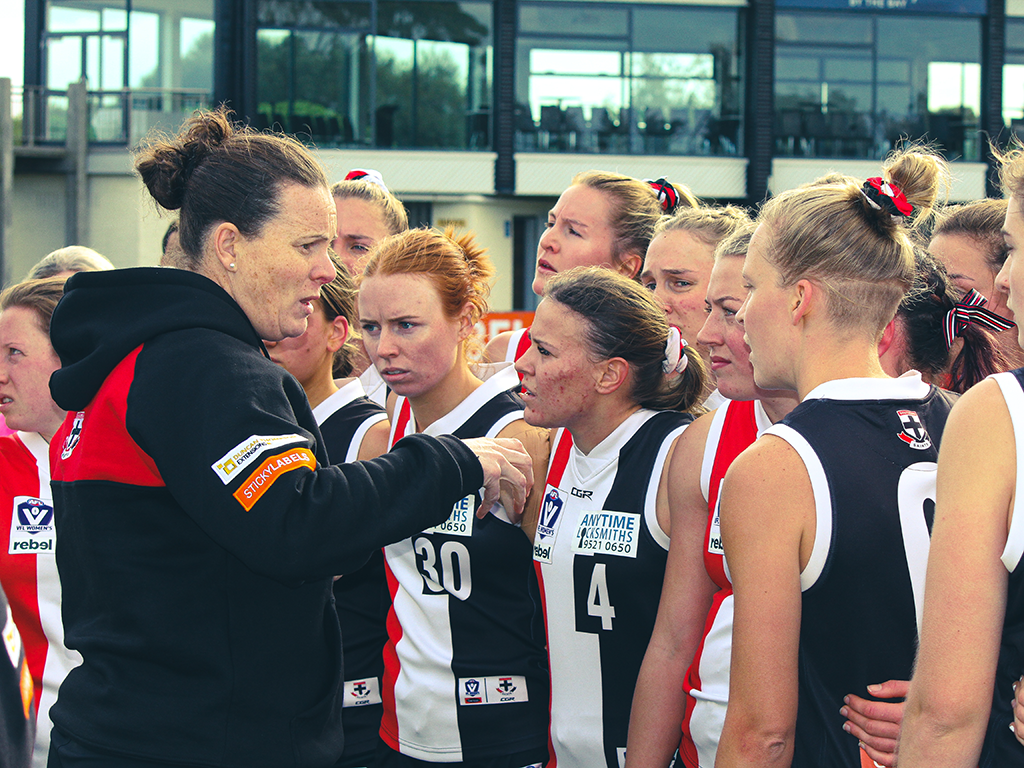 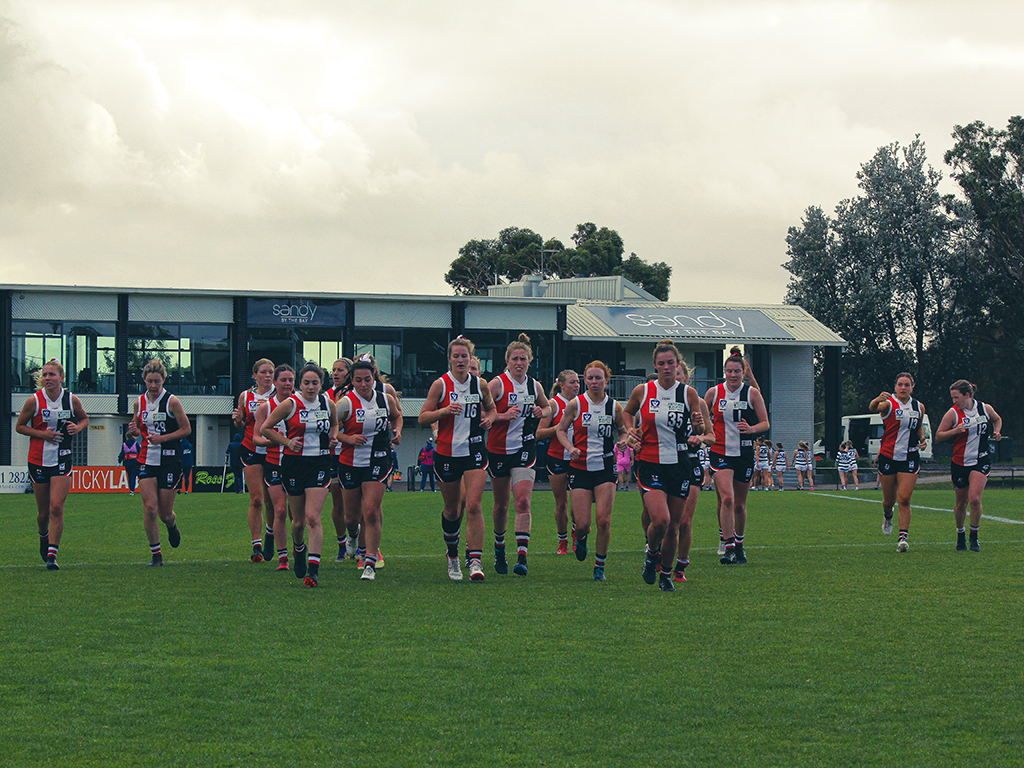 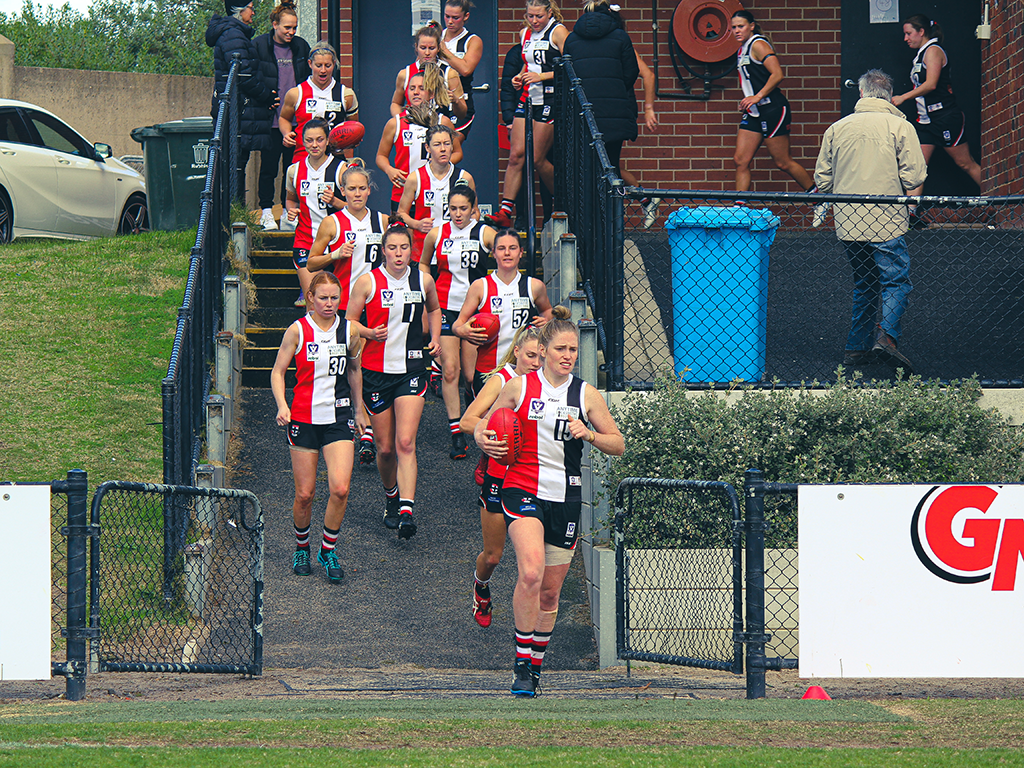 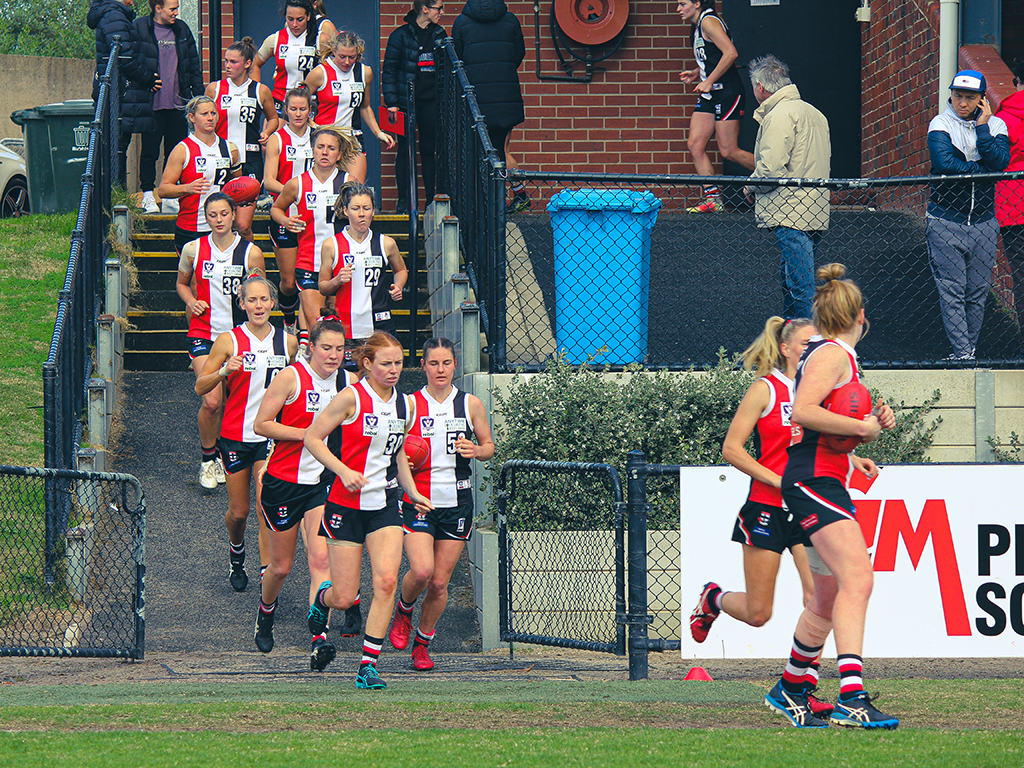 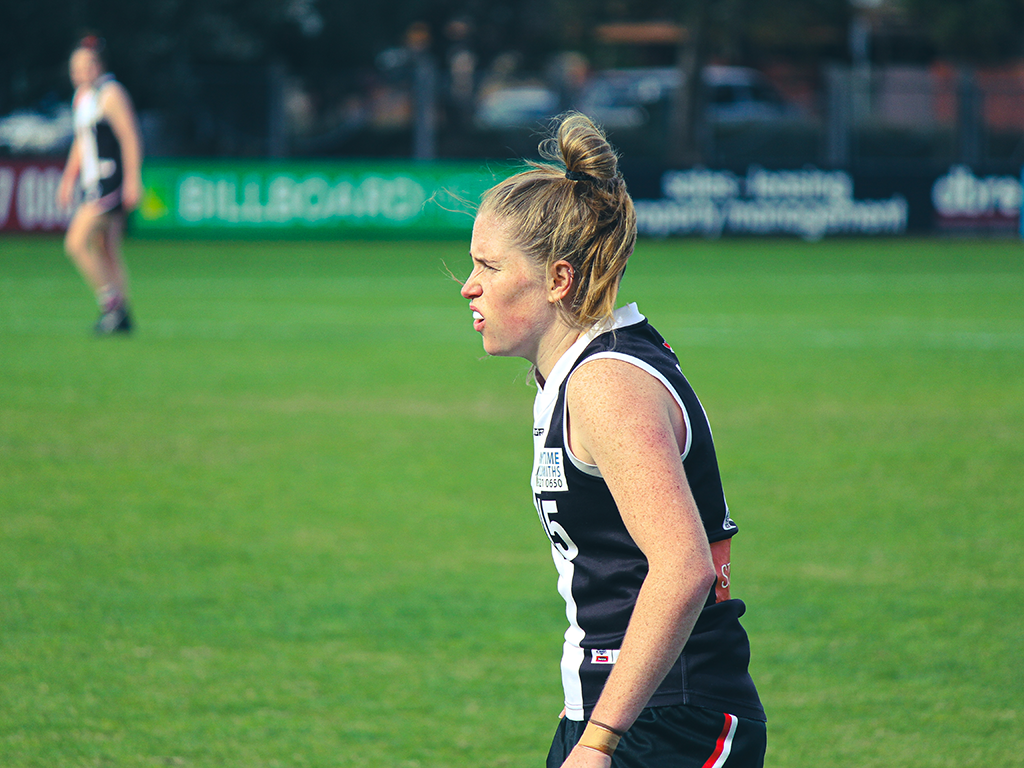 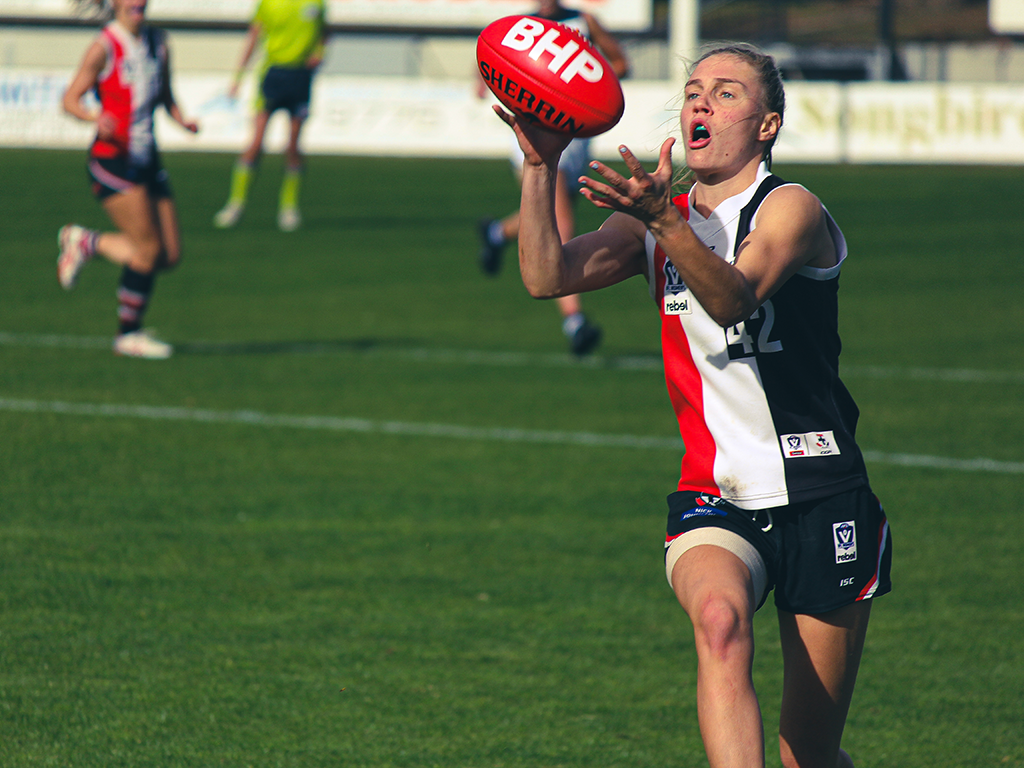 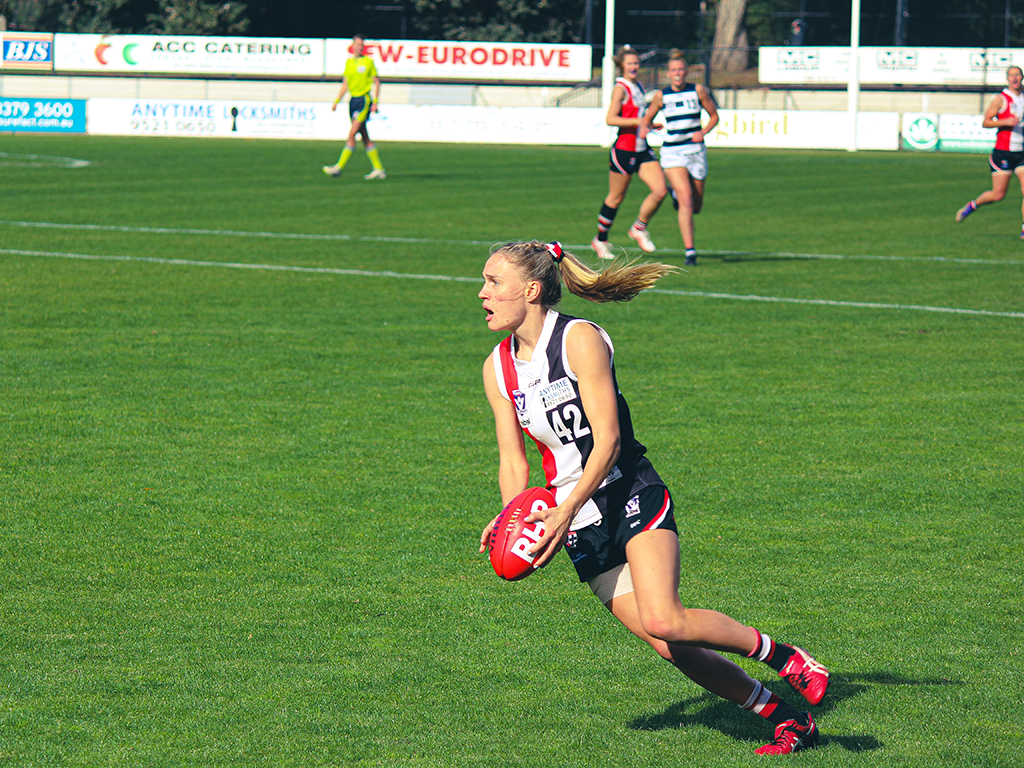 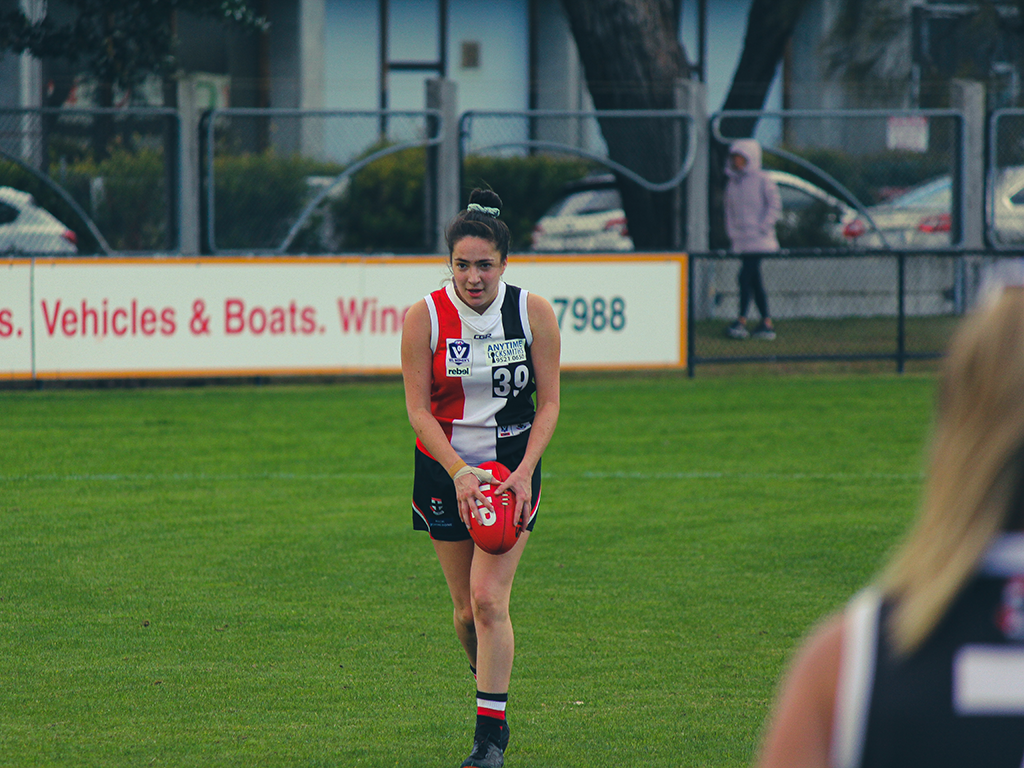 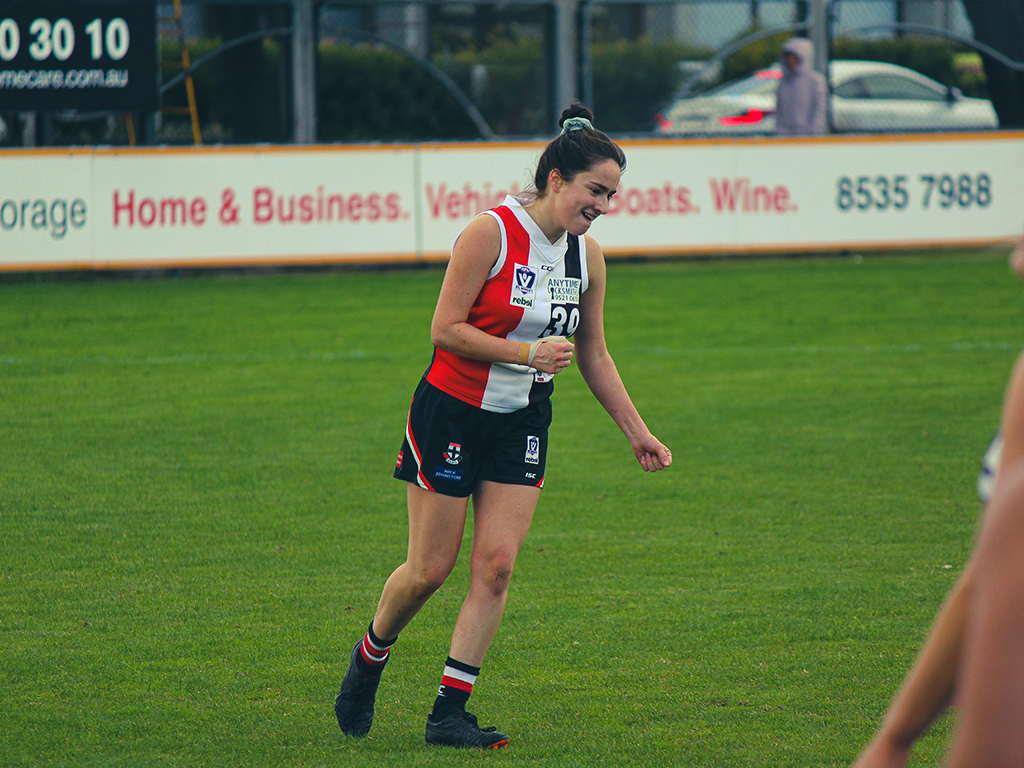 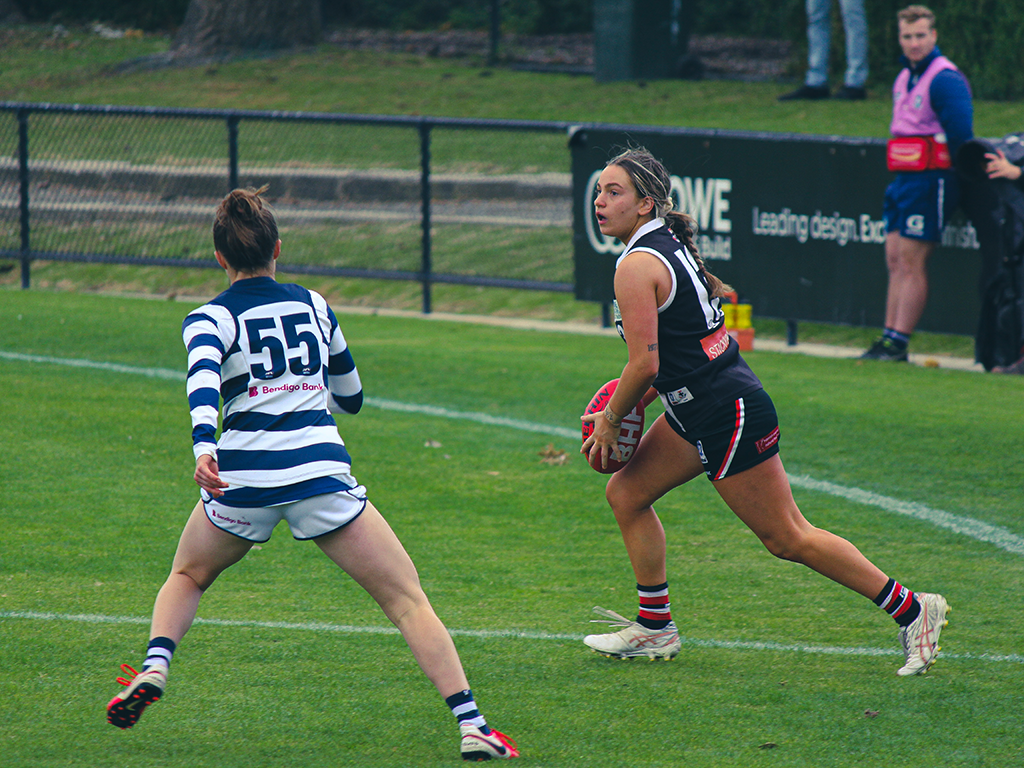 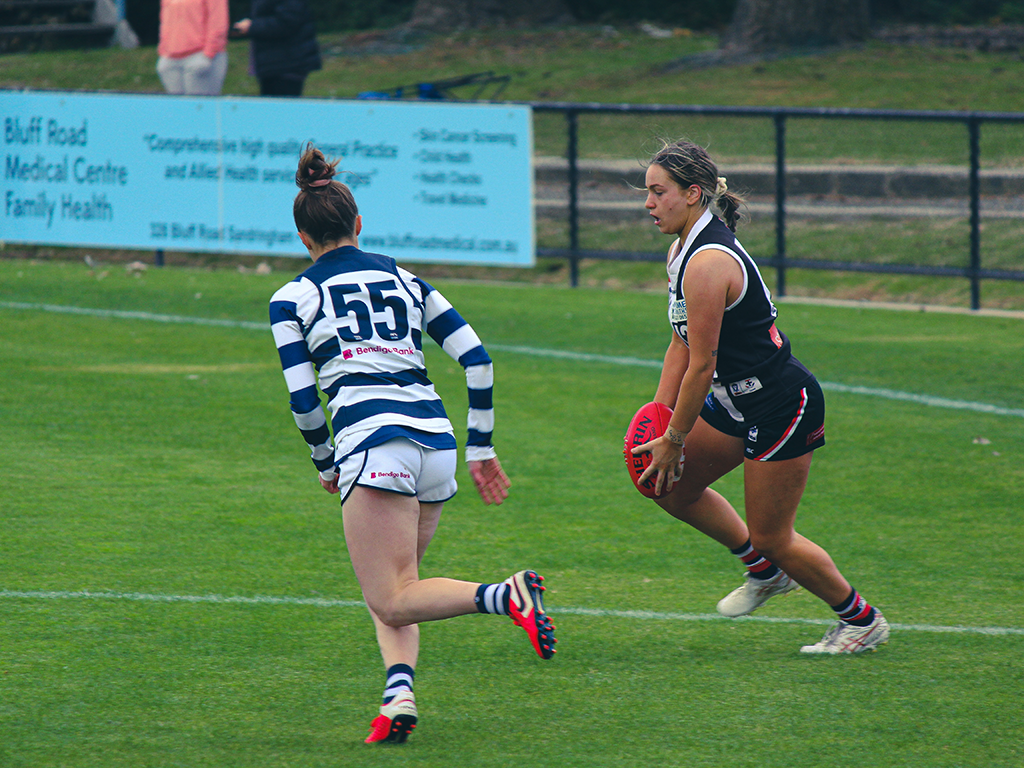 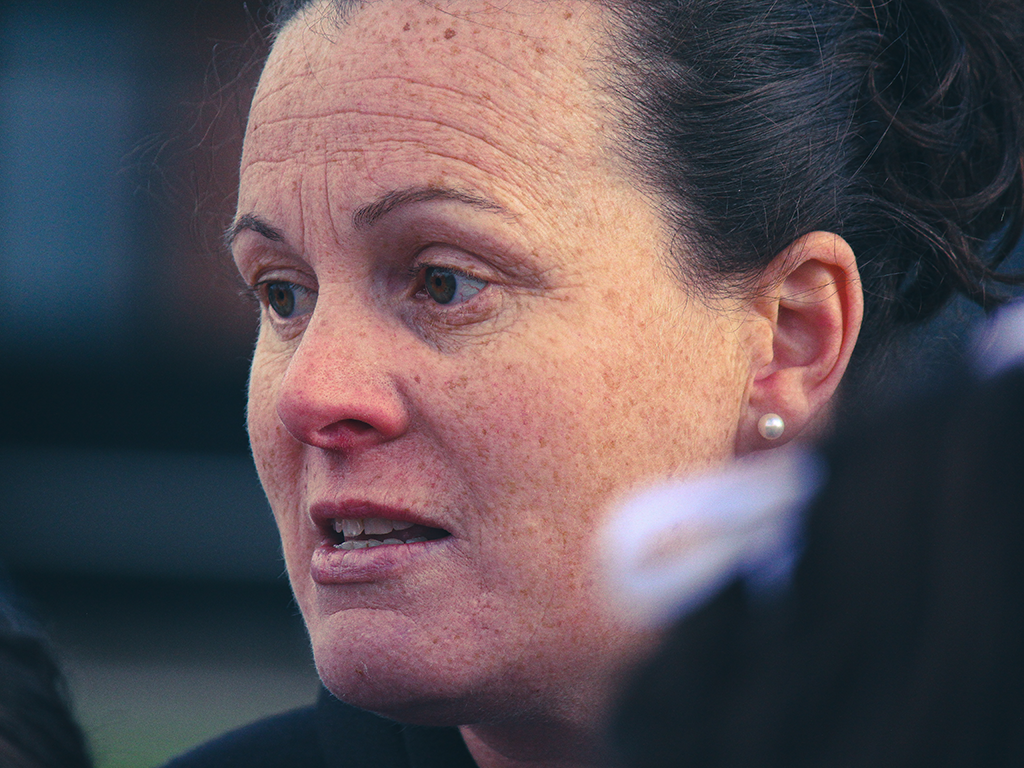 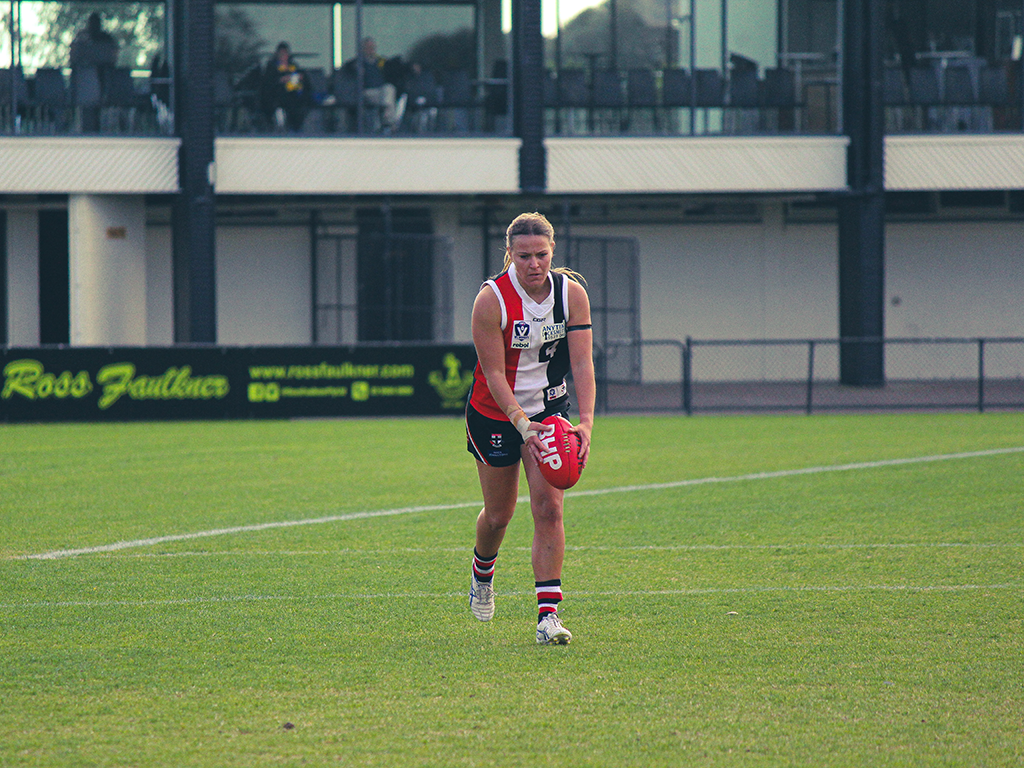 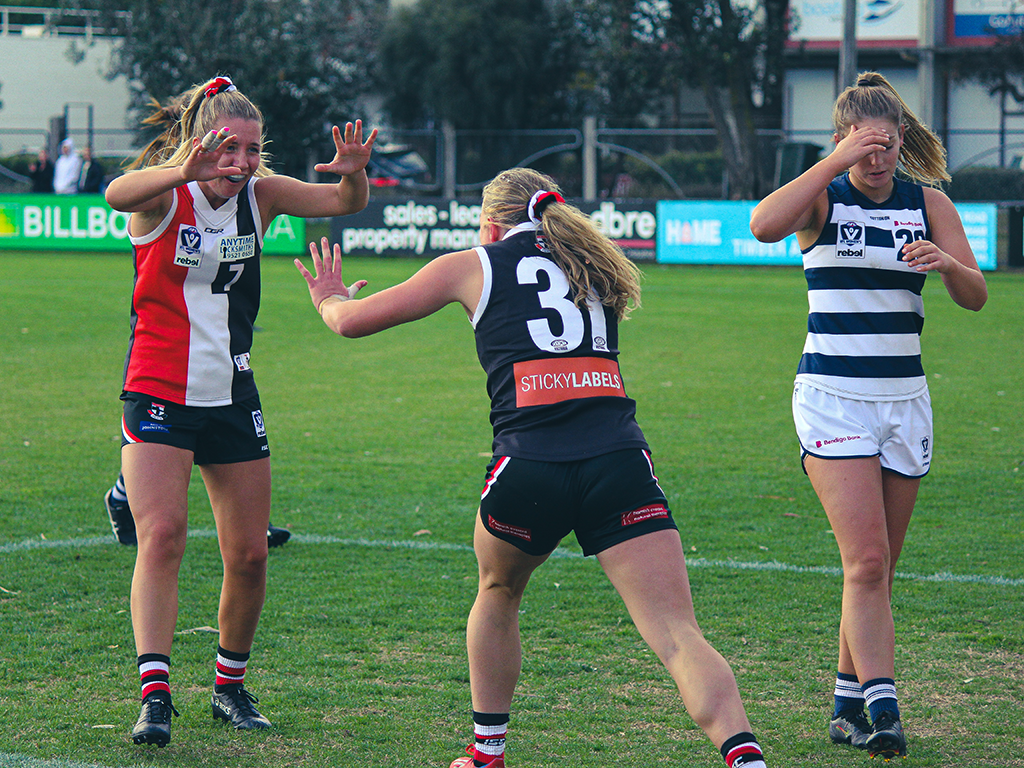 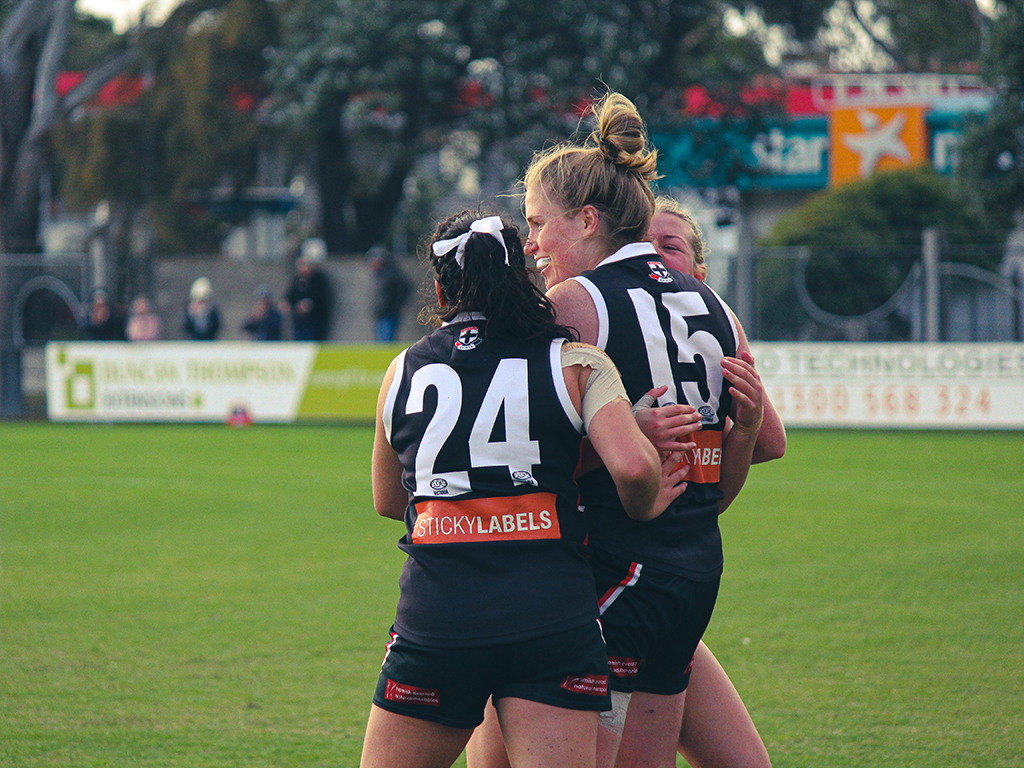 The teams were greeted by blustery weather on a freezing cold morning as an impressive crowd turned out to watch two top-six sides in action.

It was all to play for as the Saints were trying to make it three wins on the trot for the first time this season, while the Cats were aiming for their fifth consecutive win.

The match started on a scrappy note, as both sides struggled to handle the ball cleanly.

The Saints midfielders were on top early, led by Claudia Whitfort who won several key contested possessions in the middle of the ground.

Whitfort was rewarded for her effort as she took advantage of a strong breeze, kicking a tough snap for the Saints first major of the afternoon.

Aided by some excellent forward pressure, the Saints dominated inside 50 entries in the first ten minutes, as their opponents struggled to exit their backline.

Gabriella De Angelis troubled Geelong’s defense with her pace, and a brilliant rundown tackle and goal extended the Saints lead.

The Saints backline held firm — as Geelong were unable to capitalise on multiple entries — and the Saints took a 10-point lead into quarter time.

The second quarter started in a similar vein, with the Saints forced to defend for long periods of time.

However, Geelong struggled to find an avenue to goal, as multiple shots found only minor scores and several missed the mark completely.

Lucy Burke was impressive on the last line of defense for the Saints taking several intercept marks to halt Geelong’s momentum.

The Cats eventually broke through for their long-awaited first, when Olivia Barber took advantage of a 50-metre penalty.

It was a high-pressure, high-intensity finish to the half, as the Saints trailed by just 4-points heading into a crucial third quarter.

The Saints came out with purpose after half time as they looked to continue their rise up the ladder.

They got the fast start through Tara Bohanna who converted a long range set shot from the 50 metre arc to give her side a 4-point lead.

The Saints looked dangerous whenever they had the ball in their forward line, as they troubled Geelong’s defenders with their fleet of small forwards.

Minutes later, the momentum was well and truly in the Saints favour when De Angelis took a mark close to goal and kicked her second of the match.

At the other end of the ground, Aisling Curley was resolute in the back half, as she took a courageous contested mark to inspire her team.

Heading into the last quarter, the Saints were able to maintain their lead with an 11-point buffer.

The game was played at a free-flowing, frenetic pace in the last quarter as fatigue set in across both sides.

The Saints continued to fight, as they responded to an early Geelong major with a miraculous Abbey Jordan goal out of mid air.

When Geelong kicked the next two goals in quick succession, it appeared we were set for a grandstand finish.

Unfortunately for the Saints, it was Geelong who finished strongly to extend their lead in the final minutes and record an 11-point victory at Wilson Storage Trevor Barker Beach Oval.

Despite the loss, Southern Saints Coach Dale Robinson said there’s some positives to take from the performance.

“Our relentless pressure and our defensive work all game was really good,” she said.

“Gabi De Angelis was really solid all day, and Madi Capsalis wasn’t 100% but played a really good tagging role for us today.”

Robinson said there’s lots of room for improvement heading into next week.

“They (Geelong) managed three quick goals and were able to use the conditions a bit better than us for those last couple of minutes,” she said.

The Saints are now 5-6 for the season and sit sixth on the ladder ahead of their crucial round 12 clash against the seventh place Western Bulldogs.