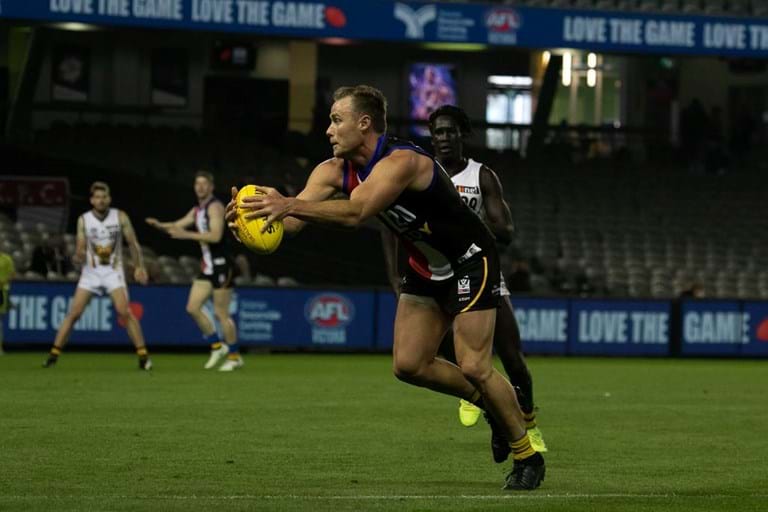 Sandringham Zebras travelled to Marvel Stadium for the first curtain-raiser of the season but were outdone by a crafty Box Hill Hawks side, losing 8.11. 59 to 16.4. 100.

It was an explosive start for Box Hill, kicking the first two goals of the game as the Zebras couldn’t quite convert their shots on goal.

Sandringham were able to get their first goal of the game in the 13th minute through Robbie Young and Sam Fox soon followed suit with a snap that put us in front.

Nick Hind sent through another goal late as the Zebras were onto a roll before letting Nathan Boucher kick his second of the night, however went into the break leading by three points.

Sandringham held a lot of the possession and their ball movement through the centre corridor provided a valuable avenue to get into the forward half, as the 16-10 inside 50 count at quarter time showed.

It was a three-point margin to Box Hill at half time after a quarter with limited scoring, both sides failing to put boot on ball in the forward halves. David Armitage dominated the midfield in the second and snuck forward to kick our only goal of the term.

Box Hill came out of the main break firing, kicking the first three goals of the third quarter and extending their lead. Sandringham just couldn’t find any scoring opportunities until a Kade Answerth dribble kick brought the Zebras back into the contest.

It was one of three Zebras scores of the third quarter (the other two behinds) after the Hawks piled on another three goals, often through scrappy contests in the air and a low kicking efficiency on the transition.

The lead blew out in the third quarter as the Hawks took a 31-point lead, getting on top at key moments and converging on the loose balls.

It was again the same story in the fourth quarter where Box Hill were able to get loose and find teammates out the back and deep in their offensive end, kicking another five goals in the quarter.

The Zebras were awarded a free kick 15 metres out from goal and straight in front, which Kai Owens converted. Another forward entry saw debutant Brayden O’Toole outmuscle his opponent to mark and he was successful in kicking his first goal for the club.

Nick Hind finished with 41 disposals to lead all players on the field, while Luke Dunstan (37) and Ed Phillips (30) were others who found the ball regularly. Debutant Brayden O’Toole was a shining light, leading the team as our only multiple goal scorer with two, both coming in the fourth quarter.

Billy Longer and Sam Rowe were a great ruck combination, winning the hitouts 49-40 as Longer had 39 for the match.

The Zebras are back at Wilson Storage Trevor Barker Beach Oval next Sunday at 2:10pm, in what will be a great fight against Williamstown to get our first win on the board.